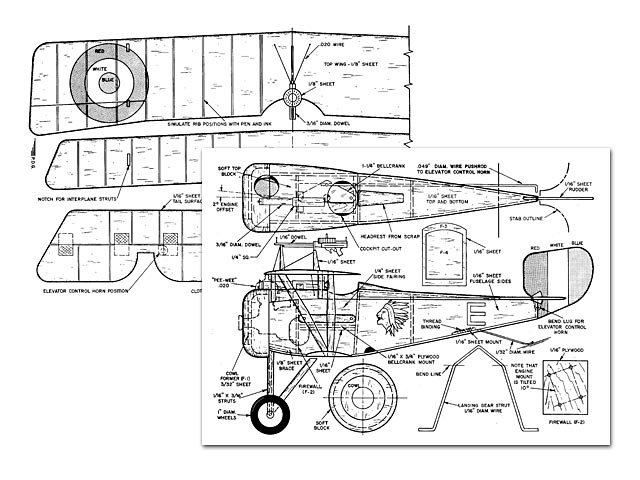 Quote: "A new field opens up for Scale model fans - the world of miniature WW I models on control lines with .020s. Nieuport 17C.1, by Paul E Del Gatto.

Oldtimers will remember the many super-detailed scale models being sold in hobby shops in the 30's and early 40's. With the advent of the fabulous little Cox 'Pee-Wee' .020, we got to reminiscing about doing a nice World War I scale model. Along similar lines. Only this time we were interested in something for backyard control-line flying.

The Nieuport 17 has always been a favorite of ours and we have done it in several types and sizes through the years. However, this time we were very much interested in doing one that could be easily assembled, while still retaining all the authenticity of the real aircraft. The photos, we feel, show without any doubt that this much has been achieved very well.

The real aircraft had quite a history in World War I. Billy Bishop was one of the most notable aces to win his spurs behind the stick of a Nieuport. The color scheme we decided upon was that used by the Lafayette Escadrille; easily identified by the famous Indian-head insignia painted on the fuselage sides.

Flying the model presents no problem whatsoever, unless of course you are used to a three-or four-pound monster on the end of the line. One thing about the Nieuport - you'll never develop an arm ache from a one tank go-around like you do with the big ones.

Because of the Nieuport's short nose moment arm, the center of gravity lies close to the bellcrank pivot point. This is something which is not possible in many configurations, particularly those dating after the first World War. It's excellent aerodynamic balance really shines in flight, as evidenced by its excellent response to the elevator controls.

Now that you have gotten all the facts, how about putting aside two evenings this week and one lonely dollar for building material. With a model this size, chances are you have got most of the material on hand and can start immediately anyway.

CONSTRUCTION: Full-size plans replete with the necessary details, help to speed the assembly and eliminates the need for aspirins while scaling up plans; not to mention the additional time which also must be spent..." 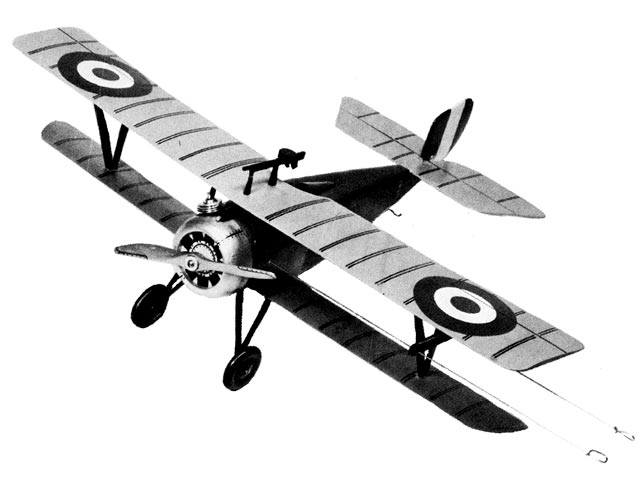