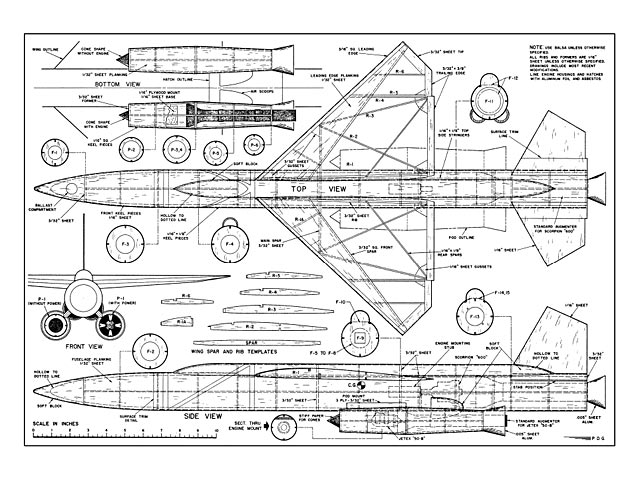 Quote: "Pushed by the powerful Jetex Scorpion - you can use three engines - this scale anti-aircraft missile travels like scared rabbit. It flies several hundred yards.

We lit the fuse and waited tensely for the power to build up in the Jetex Scorpion 600. One, two, three seconds passed, before she really started to put out, and then we launched the Bomarc. It took off skyward at 45 degrees, nosing up even steeper as speed increased. One hundred feet, 200, perhaps, 250 feet high! Then the power cut off.

The Bomarc started a wide turn as she began to glide in, quite fast, but surprisingly flat for a model of such proportions. It finally nestled down in some tall grass several hundred yards from the launching point. This was to be the first of many successful flights. Most were far more spectacular!

On these first test flights we were still using the old Jetex fuel. When we changed over to the 'V-MAX' fuel, per-formance was boosted another 25%. These spectacular re-sults more than justified our faith in such a project. The events which led up to the design of the model Bomarc are worth noting, because they involve all considerations in designing Jetex-powered missiles. To begin with, while the Bomarc is a missile-type aircraft, it has many of the desired characteristics of a conventional air-craft, and has wings and tail surfaces.

Its slim functional fuselage and pod configuration af-fords maximum streamlining and permits an easily designed light-weight structure. The generous sweepback in the flying surfaces, eliminates the need for any dihedral, thus allowing close adherence to scale. The one major change made, was to enlarge the flying surfaces slightly with respect to the fuselage and pods.

The increased area made it possible for us to design a well-stressed, streamlined structure with a wing loading well under the critical maximum for a safe gliding descent.

Two models were made; the second featured structural and aerodynamic refinements. The plans include still further refinements, and give detail on using the pods to house two more smaller engines, the size of the Jetex 50B. The proportions of the pod are ideal to take these engines, in addition to the standard Augmenter tube for the 50B. The addition of these engines and augmenter tubes will raise the average weight..." 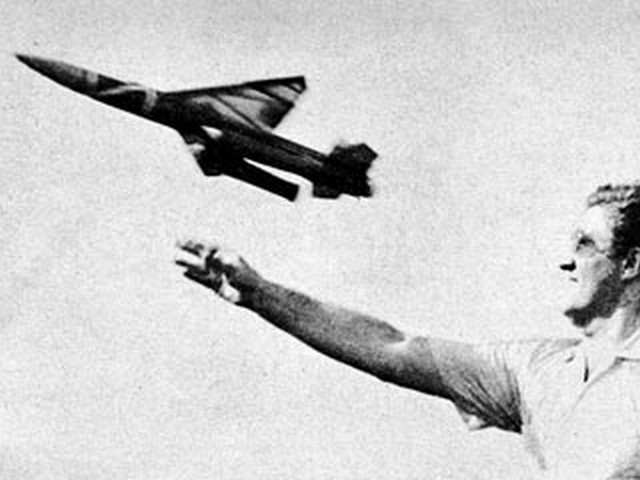