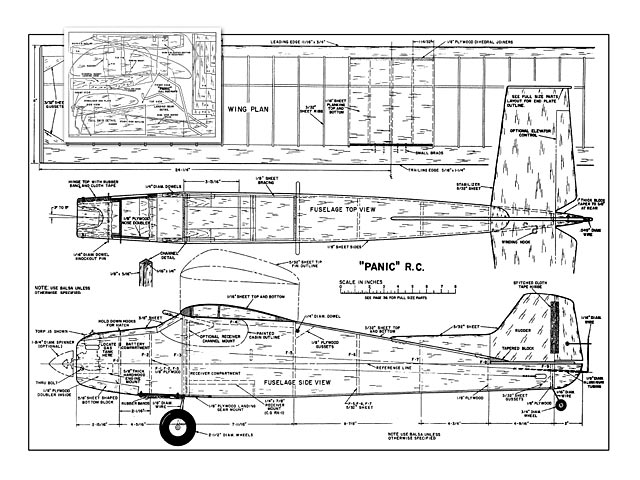 In this era of six and eight channel BIC equipment, the Rudder-Only model would seem out of place. However, the multi-channel R/C fans have more to think about in the way of radio gear and accessories. The result is that flights are fewer and further between.

To the modeler whose primary enjoyment is an afternoon's flying fun, 'Panic' is the answer. Easy to slap to-gether, rugged enough to stand the abuse of constant flights and maneuvers, and yet pleasing enough to warrant the admiration of other model builders. As a performer, this trim little craft measures up to the best that we have seen.

We chose to use a flat bottom wing airfoil section with this model. From a performance point of view a symmetrical section might have been better: however, less experienced model builders just getting started would be a little handicapped by this.

Panic is designed to do most of her own flying, you don't have to be on the button all the time. Its trim lines and fairly thin flat bottom section does provide it with reasonably good penetration qualities even in moderately gusty air.

The model shown in the photos is our second version. The first, at this time of writing, has gone over 100 flights and one new wing. This earlier design had a sparless wing and less fuselage reinforcing up front. The fin area on this improved model was also reduced a hair, so that its response to maneuvers would be more rapid.

The use of a full depth spar, notched halfway to receive the ribs, virtually eliminated the warping tendencies that were apparent in the first sparless wing, proving that simplicity can sometimes be carried to far. Wing twist and bending under the strain of maneuvers was also another trait which was apparent in our first wing, and better controlled with the new wing. For a radio model the construction time is not even worth mentioning. As a point of interest we spent as much time applying an attractive finish as we did in building the model. Cost of building is also way down. Sounds good doesn't it?

CONSTRUCTION: Begin by cutting the fuselage sides to the correct out-line shape. Key dimensions are supplied on the drawing, and the few remaining required ones can easily be sealed off. The functional straight line qualities of the fuselage make this very easy. 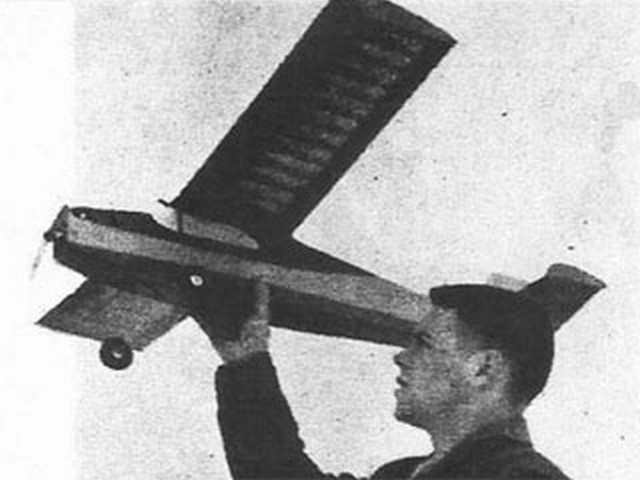