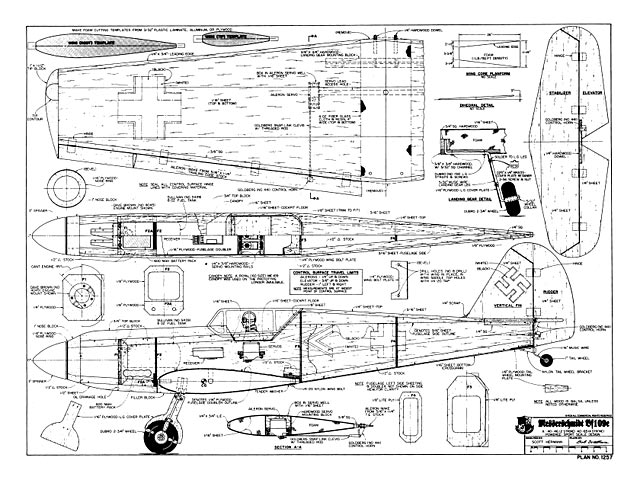 Designed by Willy Messerschmitt in the mid-1930's, the Me 109 was produced in great numbers, and many variations. Many different powerplants were also used with many types of armament.

The Me 109 is best known for its widespread use during the Battle of Britain during the summer of 1940. Swarms of Me 109's fought over England for control of the skies and the British lost many of their pilots faster than they could be replaced. Me 109's and their pilots were at this time the masters of the sky. Then Hitler ordered that London be bombed to rubble and the RAF was able to regain strength and attack the bomber formations. This was the break the British needed to turn the fate of the Battle of Britain.

The earlier versions of the 109 had a characteristic hump on the top of the fuselage directly behind the spinner. I tried to recreate the clean, yet sinister, lines that have always caught my eye, while keeping it quick and simple to build. By using a tried and true airfoil and enlarging the tail feathers, I was able to make it handle like any low wing sport plane. Construction is traditional, using balsa and ply with a foam core wing.

Construction. Cut out all parts to make up a 'kit' if you wish. This will save a lot of time and eliminate much of the usual workbench clutter.

Tail Assembly Empennage: To make the stabilizer parts, simply cut all the parts from the 1/4 in balsa stock and glue the air balances onto the control surfaces.

Fuselage: Mark the fuselage sides for correct placement of the 1/16 in ply reinforcements and then glue them in place. Keep the top sides of the fuselage sides together to be ensured of making a right and a left side. Next, mark all bulkhead locations on the sides..." 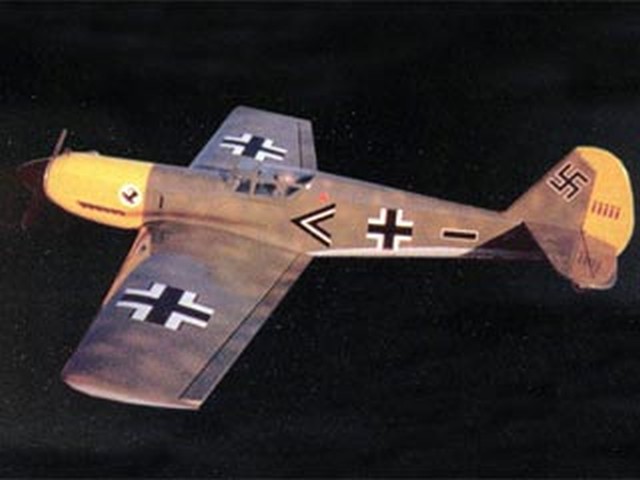