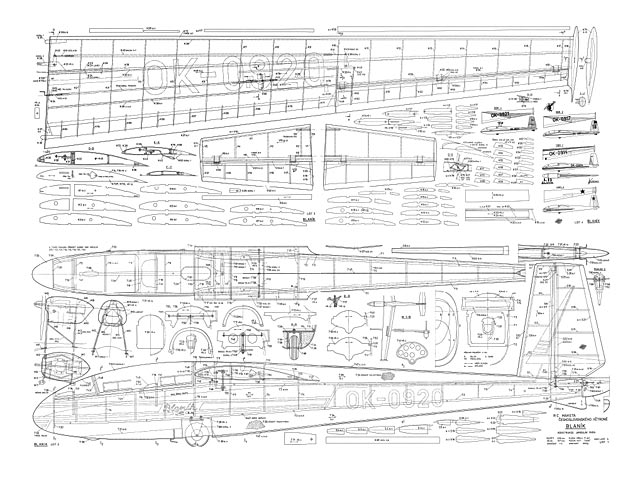 Quote: "We saw this model as published in the Czechoslovakian model magazine MODELAR and had to have it. The plans and original photos were furnished by MODELAR's editor, Vladimir Hadac, and the text was translated by Jiri Havel. We tried not to change the character of expression when proof reading.

The Blanik glider is one of the most popular Czechoslovakian aircraft. Its creation started in 1953, and the first test flight of the prototype was performed in the spring of 1955. Since that time, it has been used on many airfields of the Czechoslovakian Svazavm aeroclub and in many other countries of the world, and serves for basic training as well as for contest flying. It has been used to achieve some outstanding performances in Czechoslovakia and even abroad, and is a holder of Czechoslovakian and world records. It holds an unofficial world record in total number of produced gliders which is now over 2500, and another world record in the time of production. It is a really unique success which is a credit to its outstanding quality of construction.

Blanik is a double-seat, all-metal glider with classic tail surfaces, and a wing with negative arrow (swept forward) shape. Wingspan is 16.2 metres, length is 8.4 metres. The Czechoslovakian version, with additional engine, is equipped with a three-cylinder JAWA M 150 engine placed on a pylon above the fuselage. Detailed technical specifi-cations, drawings in scale 1:50, and photographs of both versions of the Blanik glider can be found in Modelar magazines No.12/1962, No.10/1969. and No.2/1979.

The Model Blanik is designed as a 1:5 scale model. Both halves of the wing and elevator surfaces are removable from the fuselage, as well as the pylon for the engine. The interior of the cockpit is not equipped in detail with scale instrumentation, the wheel is not retractable, and even the lift flaps are not functional because their efficiency on the model is not too remarkable. For those who wish to equip the model with flaps, there is a shape of flaps and their extended posi-tion shown on the drawings. The wheel is shown in its retracted position be-cause the visible part of it is quite enough for landing.

Prototype of the model has been constructed and tested by Mr L Houha, and the latest version of the drawing has been issued on the basis of his experiences.

For control of the model, four-channel R/C equipment is required (the prototype used Varioprop). You will not find the placing of servos, receiver, and batteries on the drawing, because it depends on the type of radio which would be used. Having this in mind, it is necessary (before starting the construc-tion) to decide about the placing of all R/C parts and to check the movement of servos in comparison with the length of control arms to assure required move-ment of control surfaces.

The Blanik is quite a complicated model, suitable just for experienced modelers. Its construction without previous experience with similar larger models is risky, and could waste your time and material. (Put differently, but nevertheless right to the point. wen) There are two versions of the model on the drawings and described in the construction guide. First one is the classic glider with marking L-13, second one is the glider with additional engine on the pylon, and bears marking L-13J.

CONSTRUCTION Before starting construction of the model Blanik, it is recommended to study the drawings and construction guide carefully. Pay attention to con-struction itself, and as well, to all the construction materials, which have to be first class quality. If you should decide to build a precision scale model with all construction details, you would first of all heed to collect the additional draw-ings and photographs for one particular full scale aircraft and fulfill all missing details into the construction drawings of the model. Some changes of the drawings could even be caused by the type of R/C equipment used.

WING The wing is composed of two panels which are connected to the fuselage by means of metal couplers, inserted into pockets in the wing and fuselage. The position of both wing halves is assured by wooden locator tabs in the fore and aft parts of the root rib. It is necessary to pay attention to symmetrical alignment of both wing halves and the shape of the airfoil must he maintained, because only with the proper airfoil will the wing have the expected performance.

The assembly of the wing has to be done on a truly flat board and directly over the drawings. Before starting the assembly, it is necessary to prepare the shims which are used to achieve the right shape of the wing and their sizes are possible to see from the cross-sections through ribs K1 and K17. The root rib is NACA 63A612, the tip one is NACA 63A608 (see Modelar No.9/1975).

Before starling the assembly of the wing, the main spar (K19) has to be prepared. It has to be thinner starting from K10 to the tip of the wing, and in the root part it must be reinforced by means of K20, K21, and strips K22. The 'pocket' for metal couplers K81 is created by parts K23, K24, and K25; all have to be glued by epoxy.

The assembly itself is normal. All needed shims have to be placed on the drawing, part K19 over them, as well as parts K26 and K27 (together with aileron, do not cut it now). Step-by-step. insert and glue all ribs K1 through K18, top strip K26 and parts K28 and KN. Apply reinforcing parts K30, holders (K31 and K32) for control arms, reinforcing K33 for hinges of ailerons, parts K34 for ribs K1, K4, and K8, tongues K35 with K36 and corner reinforcing K37. Attach mechanism arms K38 and K39, insert rod K40 with wire ends K41 and rod K42, and fix their position by soldering of washers K43. Insert bar K44 with bearings K45 (glue them into the rib by epoxy), solder the positioners K46 and arm K47 for spoilers..." 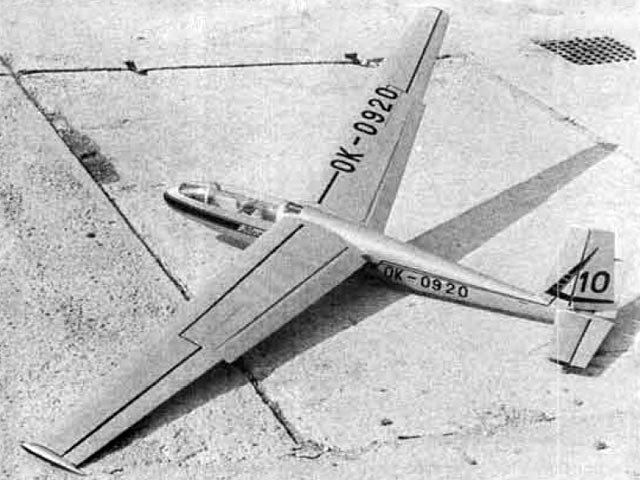