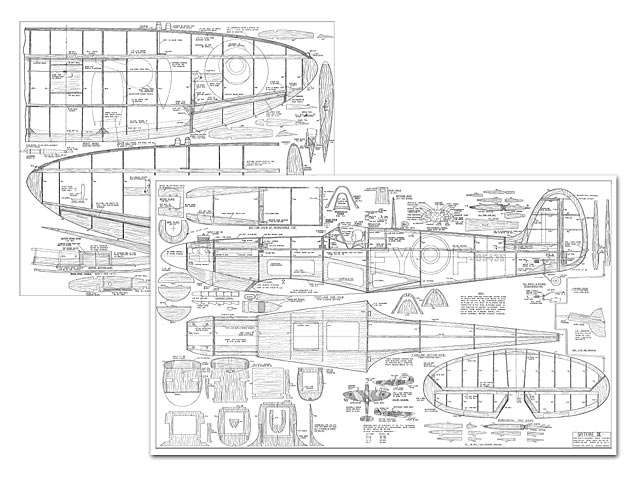 One of the most beautiful aircraft ever built, with all-elliptical surfaces, was the Supermarine Spitfire. Designer was RJ Mitchell who was also responsible for a series of racing seaplanes which included every British winner of the Schneider Trophy races from 1918 to the end of the contests - which resulted in the outright winning of the trophy for Britain.

The prototype Spitfire which first flew on March 5, 1936 was an outstanding success, but Mitchell died in 1937 before his creation began the job for which it was designed. During the Battle of Britain, the Spitfire - together with the Hurricane and greatly outnumbered - smashed the Luftwaffe and ruined Hitler's invasion plans. While various modifications greatly improved the Spitfire, the Focke Wulf 190 appearing in late 1941 was a serious threat. In answer to this menace a much improved Rolls-Royce Merlin engine was fitted to a strengthened airframe to give the Spitfire IX. The most obvious changes in the Mark 9 were the lengthened nose, large 'flat-top' cowling and equal size radiators under each wing.

This aircraft had a top speed of 408 mph at 25,000 feet and a rate of climb that was most upsetting to the enemy. The Spitfire was the only Allied aircraft to remain in production throughout the war. The last one built was an F.24 delivered in February 1948. Final operational flights by Spitfires were in mid-1957.

Since scale modelers are a demanding bunch, the markings have been kept authentic and several different aircraft squadron designations have been given as alternatives. The camouflage scheme and RAF markings are as applied during the appropriate period.

Originally a 70 inch span Spit built as a test bed for this type of model flew with a Fox .59, followed by a McCoy 60. This model has made almost 100 flights and, despite its heavy weight of 10-lbs, is very aerobatic, even in a glide. A second, smaller model to accurate scale with full war paint proved to be even more aerobatic. So far the second, shown in the photographs, has made 113 flights. It is momentarily retired after the right landing gear leg snapped off at the bend while landing across a deep rut.

Test pilot for the project was Ed Fitzgibbon of the San Diego Drones R/C club, who went through all the usual tricks plus a few unusual ones. Most of the flying was with a Super Tigre .56 - but a .45 will be plenty when the structure is lightened as shown in the plans. When modified Hassad .65 was installed the Spit just spiraled itself up into the clouds.

Structure. The model is not intended for beginners, so details like control systems and equipment installations have been skipped. Most experienced modelers have their own ideas about such things anyhow and their equipment varies considerably.

The fuselage is built upside-down on the crutch directly on the bottom view, the basic structure completed to a considerable degree before removal. This ensures a true alignment which is essential in a large, fast model. The ply sides key into the formers and the separate side pieces lock the whole assembly together, The rear formers are held erect by the bottom longeron, the main part of the planking being easily applied in this position..."

Quote: "More plans - I saw George about 10 years ago, but didn't get a chance to talk to him. I don't think he ever flew the Spit personally. A guy named Ed ? flew it most of the time. Plans are for Spit #2, George sent them to me about 25 years ago... Have Fun" 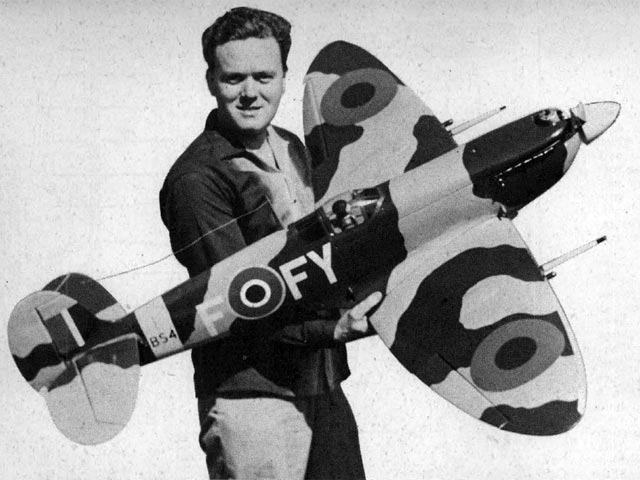