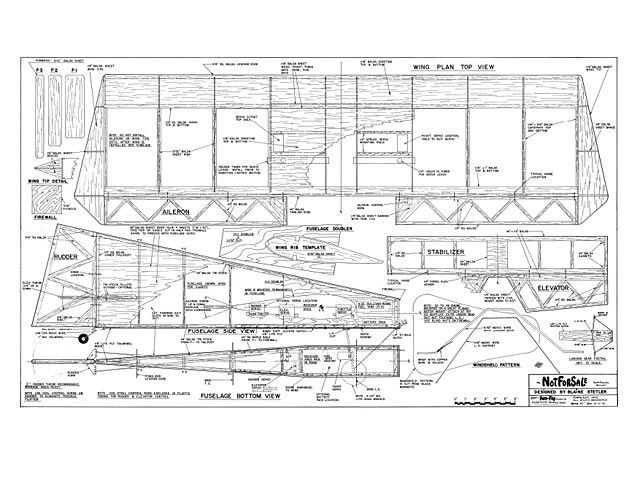 Quote "IN 1955, WHEN I was 11 years old and bedridden, my father scraped together enough money to subscribe to Model Airplane News. I remember what was on the cover of my first issue: an R/C airplane called the Smog Hog (oz671) held by 1-loward Banner and a control-line model the Thunderbird (oz6238) held by Bob Palmer. You old-timers will remember both of these guys. The Smog Hog wing was eventually modified and used as the inspiration for the low-wing Astro Hog (oz4756), originally kilted by Berkely and now by Sig Hobbies. I believe Bob Palmer went into the AMA Hall of Fame.

When I received that first issue, I was hooked on model airplanes, hook, line and sinker! To have Model Airplane News publish this design for the Notforsale 37 years later is, for me, quite a thrill. Over the years since then, l have learned to fly reasonably well with the aid of some very good friends. After going through (destroying) three or four planes. I could take off, fly around and successfully land. Eventually, I decided to help others learn to fly, and I have trained a few dozen new R/C pilots in recent years, many of them very eager youngsters.

Lately, I have been building kits for other people. mostly scratch-building for myself, and testing aircraft after aircraft. I rebuild crashed airplanes, make them flight-worthy, and then someone buys them from me so I can go on to the next project. Finally, I decided to design a totally different airplane, and the result is the Notforsale. There are about a dozen flying now, and the design has proved to be as reliable as it is popular.

CONSTRUCTION Start by cutting out the major parts from the plans. I cut out the 1/32 aircraft ply doublers (two pieces), the wingtips, ribs (10 pieces) and the firewall out of 3/16 aircraft ply, the three formers F1, F2 and F3, and the bottom hatch out of 1/8 lite-ply. Use care, especially when cutting the doublers; these are two of the most critical parts of the kit!

Fuselage. Select four good pieces of 1/8 balsa, 3 in wide by 30 long. If they are warped, straighten the edges using a metal straightedge and a sharp X-Acto knife, so they fit firmly against one another. Fit two pieces together, and use six pins to hold in place, allowing approximately 2 in between. Use 3/4 or 1 inch masking tape to hold the pieces together. Remove them from the board, turn them over and apply some medium or slow CA. Holding the joint open, apply the bead the entire length of the sheets..."

Hi Steve, Finally got around to scanning a couple plans for you. Everything for the NotForSale should be on the plan, it's a simple build.

Update 13/06/2017: added construction booklet "in its stained and well loved glory", thanks to AndrewGadsden. 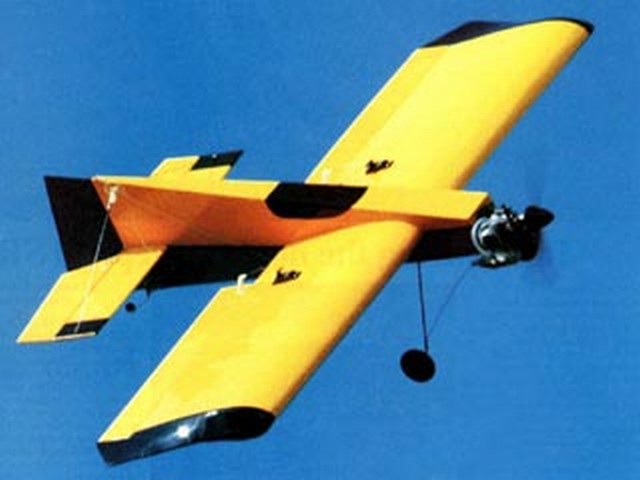