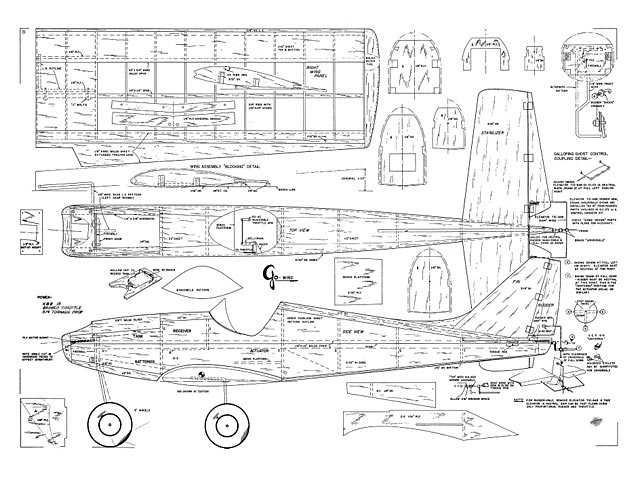 The 'Go-Wind' has a few similar features, but on the whole it is a com-pletely different ship from its predecessor. Prior to powered flight, and with much apprehension, we decided to see if successful test glides were possible as a prelude to firing up the engine. The W-W never was successfully test glided. Most of our attempts wound up under-powered and the ship responded accordingly. Seven times the 'Go-Wind' was launched into the tall grass and seven times it settled into a flat glide, each of which was surprisingly gentle for a ship of this weight and size.

Our regular flying field is a well mowed patch in a pasture - paradise compared to some flying sites, but still not conducive to ROG's. After three or four attempts it was decided to seek out a patch of 'hard top'. This accomplished, we were able to witness the type of take-offs all modelers hope for. Now that we are sure the model has no mean streaks, it's ready for hand launches at our regular base of operations - that's right, I'm chicken!

I've found that most model accidents occur during or shortly after a hand launch, if it's not done exactly right. With a new and untried ship the odds are even greater. By being able to ROG, the model has a chance to seek its own speed and usually the test flight damage is kept to a minimum. In our case, it was a good idea as we had neglected to charge the pulse box' batteries and they went sour during the first and second take-off. The waiting period prior to each of these flights had allowed the nicads we use to re-juvenate. (This is often referred to as a false sense of security!) UP control is the slowest pulser speed and both times the pulser ground to a stop. Luckily, unlike using just a motor with stops for galloping ghost, the Go-Ac has neutral and low speed fail-safe. The engine settled down, the plane re-covered from its steep take-off climb and landed. Rule to remember is al-ways make sure your batteries are up to par!

The rudder and elevator linkages used are a composite of several ideas used by John Worth, Tom Telesca and myself. Where one idea stops and the other begins, I don't really know but the arrangement is very flexible and can be easily adjusted for more or less UP or DOWN elevator.

The extended trailing edges are not meant to overwhelm a prospective builder. These give an additional wing area without drag and because they are deflected down by 1/16 at the root, give a slight flap action resulting in additional lift. This item is added after the basic wing is completed and simply aligned by the jig pattern shown on the plans. Aside from this, construc-tion is relatively simple and should not offer the experienced, builder any insurmountable problems.

Here is another Strader plane, I'll follow up with article tomorrow. Just a couple left for Ted Strader and you will have all I know of and can get to you one way or another. These are from the magazine articles as I do not have have full size plans from Flying Models, most of the really nice stuff I have is from American Modeller magazine. The Go Wind is a pretty nice looking AC. I scaled it to full size. Dave 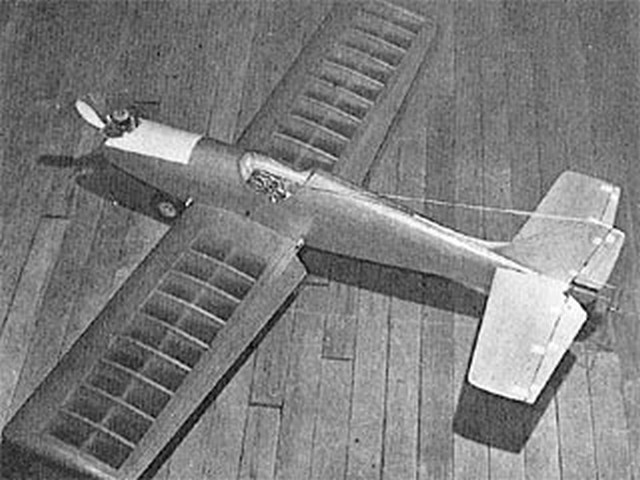