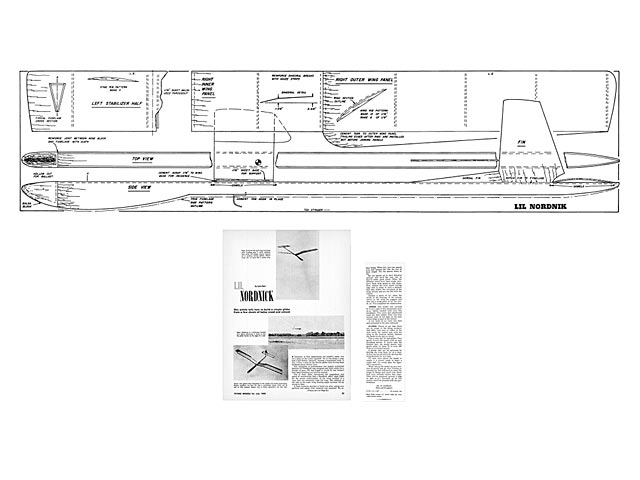 Quote: "Right: Lit Nordnick's gull wing and droop snoot fuselage give it rakish sailplane lines which will please anyone interested in building towline gliders. What's mare, this 'un soars like a contest ship. This article tells how to build a simple glider from a few sheets of balsa wood and cement.

Contrary to first impressions our model's name was not a play on the word 'Sputnik' for it was flying a year and a half before Sputnik became a household word. It was, rather, a play on the Nordic glider class having been designed along similar lines.

Any similarity in performance was largely accidental because Li'l Nordnick was designed and built solely for a change of pace. We had hoped it would fly but weren't bent upon breaking any worlds records.

Use of sheet balsa throughout for ruggedness and speed of construction had a beneficial effect upon flight for the severe undercamber of the wing resulted in a very slow yet extremely high lift wing. The addition of the tabs to the outer wing trailing edges increase lift by acting as flaps.

A local modeller decided to build one after seeing ours perform and asked what material was required..."

Hi Mary/Steve - Here are two Ted Strader plans to fill out the tribute to him. The Joy Stick from Flying Models magazine issue 12-59 and Lil Nordnick FM issue 07-58. Regards, theshadow' 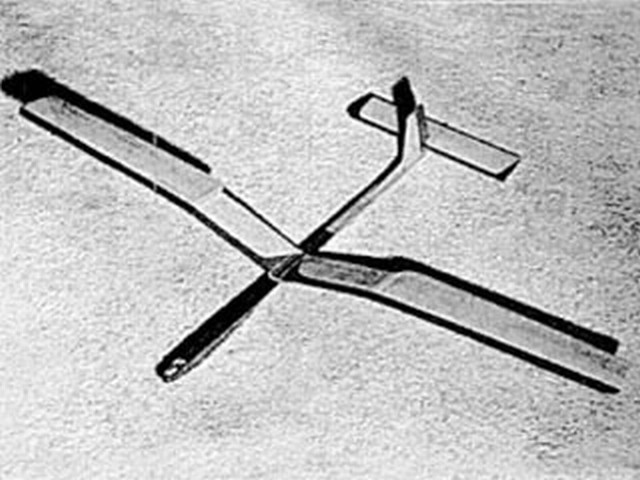 I remember when these plans originally appeared in FM and had to make one.
Construction was straightforward and quick and it flew surprisingly well for something that cost almost nothing.
Tom Kieffer - 12/10/2020
Add a comment