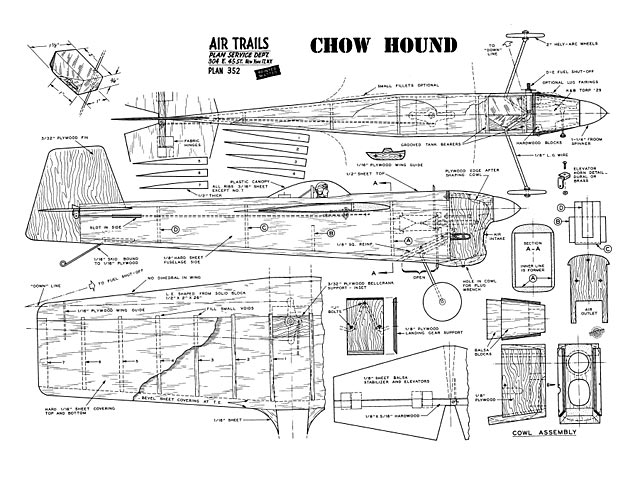 Quote: "Have you ever felt you had to have another entry for that contest just four days away? That's the way we felt, and so to the drawing board. We had to have a team racer and building time was scarce. Forty-five minutes later, out from under the drawing board crawled the Chow Hound. The original plane was built in two days and a night. After about twenty test flights we were ready. The next day, at the US Air Force's First World Wide Model Airplane Championships, the Chow Hound sailed over the finish line 16 laps in front of the second-place plane.

In construction of a team racer, the most attention should be given to the engine. You must be able to start it easily even when hot. So test your Class B engines and pick the best one. We used a radial mount in the Hound which means the ship will take an Ohlsson. Veco, Orwick or Torpedo. With minor modifications you can shift over to a McCoy, Dooling, Fox or Forster. We have flown the Hound with both an Orwick and Torpedo .29. The K&B was faster, but the Orwick was more economical with the fuel - so it's wise to conduct your own flight tests.

For a smoother cowl we cut off the beam mounting lugs - but this is not absolutely necessary. The hottest ship doesn't always win - but the most reliable one usually does.

Begin construction on wing by cutting leading edge to shape and notch for 3/16 ribs. The purpose of thick ribs is to give more surface for gluing, eliminating much of the warpage when dope is applied. Cut out wing ribs and glue in place. For sheeting wing, use 1/16 x 6 in, or 2 sheets of 1/16 x 3 in glued together. Glue sheeting to tops of wings first - and spread it on. Use pins to hold in place. When this is thoroughly dry, sand a taper to inside of trailing edge so bottom sheet will lie flat.

Glue bottom sheet in place, using pins or weights to hold forward part of sheet in place, and clothespins on trailing edge. When dry sand to air-foil shape. Notch out space in bot-tom of the center section to inlay the 3/32 plywood bellcrank mount. This must be mounted strong enough to take at least a 30-pound pull test when the ship is finished, so for safety's sake, mount it securely. Install the wingtip guide and lead-out wires.

Now comes the fuselage. Cut firewall from 1/8 plywood and drill motor mount holes for radial mounting. Glue sides cut from 1/8 balsa sheet to firewall. Next add formers A and B. Now install 1/8 plywood landing gear mount. Strengthen this by gluing 1/8 x 1/8 strips in the corners. Glue formers C and D in place. Sand a taper to inside of tail end of fuselage sides and glue together..." 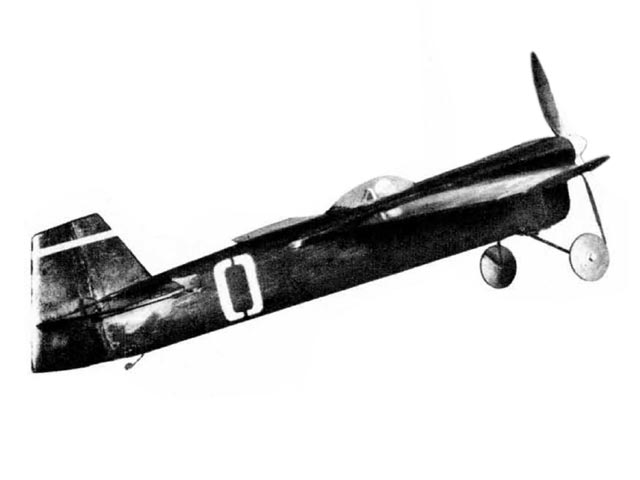