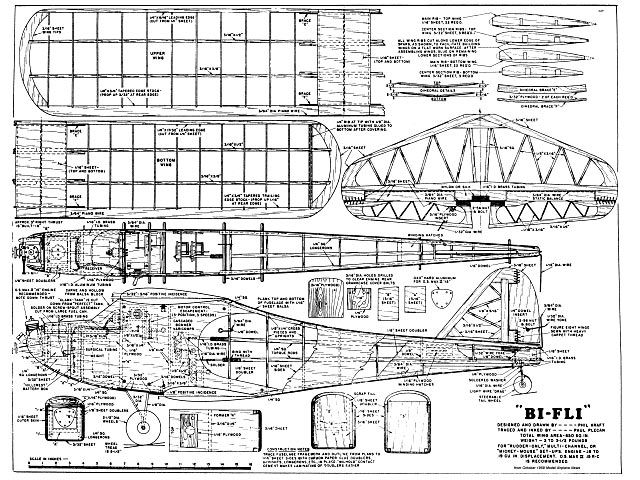 Quote: "Full-scale biplanes are no longer produced except for special purpose types such as Grumman's new crop duster. Their relatively low efficiency clue to the higher induced drag of two wings has relegated this oldest aircraft type to rapid extinction. However, for our purposes, the lower lift-drag ratio is not a disadvantage and, from the theoretical standpoint, the biplane seems to be the most logical approach to RC stunt. There is little question that the biplane is the most maneuverable type of aircraft. Virtually all of the full scale airplanes used in stunt competition were biplanes.

The reason for the biplane's inherently superior maneuverability lies primarily in its shorter moments and concentration of mass and area which reduce the effects of inertia. Thus, the biplane can respond more quickly and smoothly to control movements. Besides maneuverability, the biplane offers greatly increased stall resistance. This is because the rear wing is generally set at a slightly lower angle of attack than the front. In a stall, the rear wing retains its lift longer than the front and since it lies aft of the center of gravity the nose of the airpla'ne will drop to regain flying speed without the abrupt loss of lift and sharp dive associated with monoplanes. Ground handling, take-off, and landing characteristics are also excellent. From the model standpoint, the reduced overall dimensions of the biplane provide a stronger, lighter aircraft which is easier to transport.

Theory and practice do not always coincide, but the apparent advantages of the biplane layout prompted the design of the Bi-Fli. A great deal of thought went into the design in an attempt to produce a maneuverable yet stable, smooth-flying model suitable for any type of control from rudder-only to multi-channel equipment. For flight smoothness, a moderate wing aspect ratio (6-1) and fairly long tail moment with plenty of stabilizer area has been used. Logically, the two wings should be the same size, but for appearance sake the lower wing was designed 10% smaller. While free-flight experience has taught that an unduly scientific approach to airfoil selection is rather senseless, the NACA 23015 section was selected because its characteristics seemed ideal as to center of pressure travel, etc. More important, the section looked 'right.' Negative stagger was seriously considered, but the more conventional positive stagger was decided upon to simplify landing gear installation.

The first Bi-Fli weighed only 37 ounces and was powered with the K&B .09. The ship was a beautiful flier, living up to all expectations, but it was a bit slow due to the very light wing loading..." 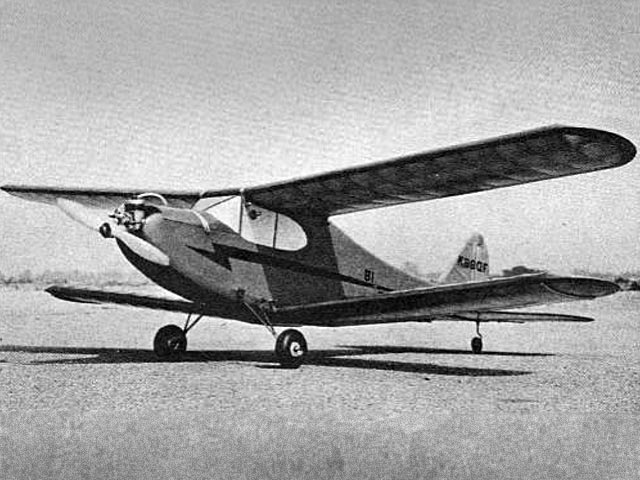 AFAIK it was single-channel with 3 *cascaded* (Bonner Varicomp) escapements, as mentioned in the plan.
UStik - 08/01/2017
Please find attached photos of my recently completed & flown Phil Kraft Bi Fli built from your OZ plan 823 [more pics 003-005]. When I first saw the Bi Fli in an old magazine found at our local hobby shop I was hooked on the design. Must have read over the article a dozen times. Quite some time later I found the plan on your site, downloaded, printed it off & started construction right away. I made a few changes to the construction of the nose area to suit modern motor mounts & fuel tanks. I also intended to use servos instead of three escapements! The engine used is an OS 15FP with 8-5 prop - which worked out well - not over powered but enough to allow takeoff's from our grass field. This model has a terrific flat stable glide. The fuselage is covered with silk span & dope, wings & tail with Solartex. After the colored dope was applied the entire model was then sprayed with automotive two part clear in order to fuel proof. This summer I will fly it with my 2.4Ghz converted Kraft Reeds transmitter for nostalgia sake (and a step up in technology from rubber driven escapements).
MikeFoster - 07/01/2019
Added another nice photo of the completed model, thanks to MikeFoster [more pics 006].
Mary - 21/01/2019
Please find attached build article to go along with your Bi Fli plan oz823 [see suppl. file]. After several flights with my Bi Fli off our grass runway I made new landing gear with the axle 1-1/2 in farther forward placing it in line with the #4 bulkhead. This made it much more difficult to nose over on take off and landing on the grass runway.
I found a video on you tube showing Phil Kraft (and others) flying off their club field which was all hard surfaced, see https://www.youtube.com/watch?v=ld4fPt5go0U - the original landing gear configuration would have worked well on that!"
MikeFoster - 25/11/2019
Add a comment