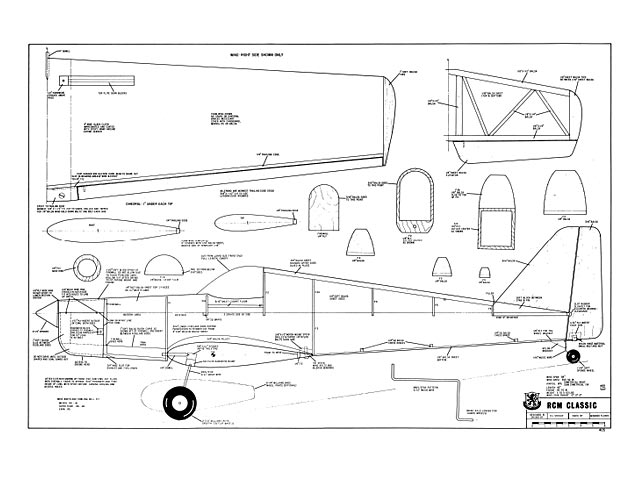 Quote: "I strongly suspect that most model airplane designers lie awake nights trying to think of catchy and appropriate names for their new creations. In this case the name RCM Classic came first, as a result of the proportional radio construction series presented in this magazine. The model was designed to conform to my conception of the word - 'Classic'. In music and art the Classical Period was characterized by clearly articulated form, with few superficial embellishments. The lines of the RCM Classic are intended to be esthetically pleasing as well as functional. Its overall appearante is, hopefully, classical in much the same way as a Lincoln Continental.

In addition, the RCM Classic is intended to look like an airplane! Most of our competition aircraft could not be termed 'models' in a strict sense. A model is a miniature representation of something. Very, very few of our acrobatic planes bear any resemblance to full-sized aircraft beyond having wings, fuselage, and a tail. These planes would be more properly designated as 'Remotely controlled, miniature acrobatic aircraft'. Can't you just imagine someone on the flight line saying: Bring me my red and white, remotely controlled miniature acrobatic airplane? I must say though, when I am asked what my hobby is, it does sound a little better than saying: I fly model (toy) airplanes.

Now that we have established what a model is, I believe we can safely conclude that the RCM Classic is a model and - a remotely controlled miniature acrobatic aircraft. Before theorizing any further (which could even cause the name of the AMA to be changed to ARCMAA & FF) let me describe the design parameters and objectives which were established before the work began:

1. Realistic appearance without being a scale model of a particular airplane.
2. Classical lines, esthetically pleasing.
3. Medium size, capable of satisfactory performance with a .45.
4. Conform to RCM's, Herman/Capetian aerodynamic principles as closely as possible.
5. Fully acrobatic, capable of Class C and FAI maneuvers.
6. Easy to build considering objectives No.1 and No.2.

1. After building and flying a Goodyear (Formula 1) Racer, I found that 'turtle deck' construction is not too difficult; inverted-fully cowled engines are not too hard to handle; conventional landing gears do not make ground handling and landing too difficult; and wheel pants certainly add a great deal to overall appearance.
The Classic is not a 'scaled up' Formula I Racer. The only real resemblance is in the turtle deck and cockpit. The front end looks a little like the old Ryan ST. I am convinced the overall effect is of scale appearance, because I have been asked several times what scale model I was flying.
A well broken-in engine may be easily started inverted once you get the hang of it. The conventional gear for realistic take-offs and landings and has never ground looped. Since the kiddie car maneuvers have been taken out of the AMA pattern, the conventional gear no longer presents a severe handicap.

2. Whether or not 'Classical, esthetically pleasing lines' were achieved is a matter of individual judgement. I can only say that every person who has seen the plane has been enthusiastic about its appearance. Look at the pictures and drawings and decide for yourself.

3. Medium size was chosen because of my conviction that it is the way to go. Balsa continually increases in price, the cost of fuel will probably increase dramatically by the time this article is printed, and most good, large (.60) engines are now in the $50 to $100 range. A 16 cent radio component failure could destroy that big expensive airplane, big expensive engine, and the radio. In addition, it is not necessary to have 700 to 800 square inches of wing area in order to execute smooth maneuvers. The success of the New Orleanian (596 sq inches) has pretty well proved this point even though it is usually flown with a .60 engine.

4. Most designers could develop a plane which would adhere to all the aero dynamic principles expounded in RCM by Herman & Capehart but - what would it look like? Obviously it would be desirable to have half of the rudder area above and half below the thrust line; half of the total mass and weight above and half below the wing center-line; and the thrust, wing, and stab all on a straight line. To do these things and have the results look like any full-sized plane I have seen is beyond mycapabilities. So, I must make certain compromises with the ideal. There are, however, many areas of conformity with the ideal..."

Update 28/10/2020: Replaced the article with a clearer copy, in colour, thanks to StevenWieczorek. 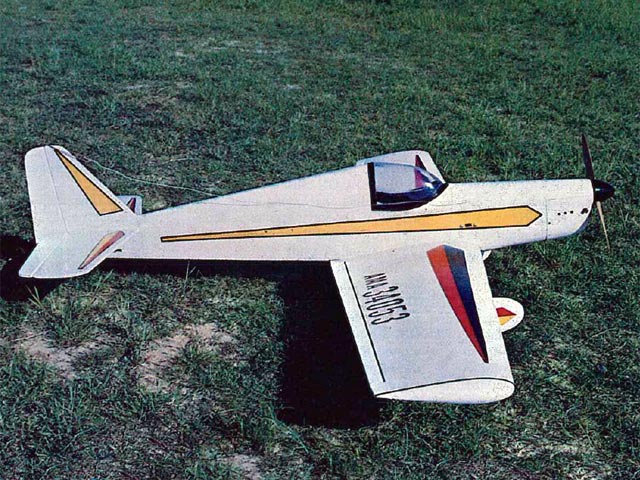 Hi Mary and Steve, I hope that both of you and family are staying safe and healthy. Here in the US, the COVID-19 pandemic is exploding. Attached, please find the article for the “RCM Classic” by H.L. Stroup. It is a much clearer and in color article than the one on your website. I hope you can use it. Best to you and stay safe,
StevenWieczorek - 28/10/2020
Add a comment