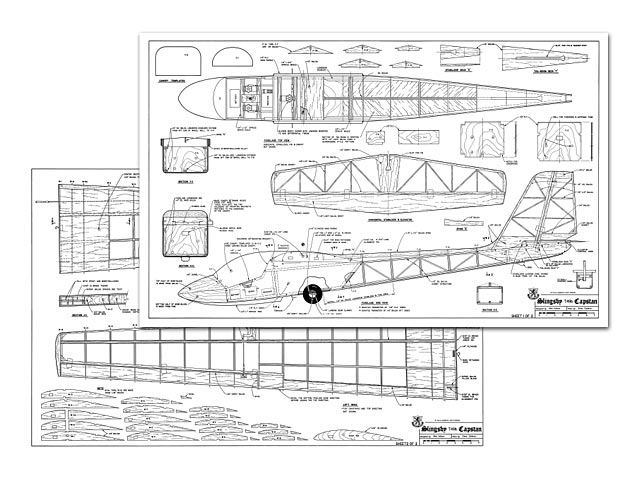 The T49B was a two-seat training sailplane built by the famous Slingsby Company of Yorkshire, England in the early 1960's. The model is a 1/6th Stand-Off Scale version of the Capstan, of conventional balsa and ply construction, and should present no difficulties to anyone who has built at least one sailplane before.

Construction. Wing: Since the Aquila (oz5136) is the only sailplane kit the author has ever built, readers will probably recognize a strong similarity between the wing construction techniques included in that kit and those that follow here!

(1) Butt-join the 1/16 sheet bottom center section and pin over the plan. Cut the bottom trailing edge from 1/16 balsa, bevel the outer edge and glue to the center section. Sand and taper the leading edge from 1/2 x 3/4 in balsa, after first splicing to the correct length if necessary (cut splice W18 from 1/16 ply). Glue the leading edge to the center section sheeting.
(2) Make the bottom wing spar from two 1/8 x 1/4 spruce strips, splicing them from the inside with a 3 in long spruce strip as shown on the plan. Next, cut and taper the trailing edge aileron strip from 5/8 x 1/4 balsa, notch for ribs W9 to W16, and epoxy the aileron hinges in place. Position the trailing edge aileron strip and bottom wing spar over the plan.
(3) Cut two sets of wing ribs W1 and W1A, from 1/8 balsa, and W2A to W16 from 1/16 sheet balsa. Slot all ribs for top and bottom wing spars and ribs W1 to W8 for the sub-spar and aileron pushrod. Cut triangular wedges off ribs W9 to W16 as shown; these will serve as the aileron ribs. Glue W1 and W2 to W8 in position, using the wing root template to tilt W1 to the correct dihedral angle. Epoxy W16 in place, and the trailing edge aileron strip between W8 and W16, then add ribs W9 to W15. Make the top wing spar as per the bottom spar, and glue in position.
(4) Cut the 1/16 sheet balsa webbing and cement between the wing ribs, front and back of the main spar. Next, cut the forward wing brace..."