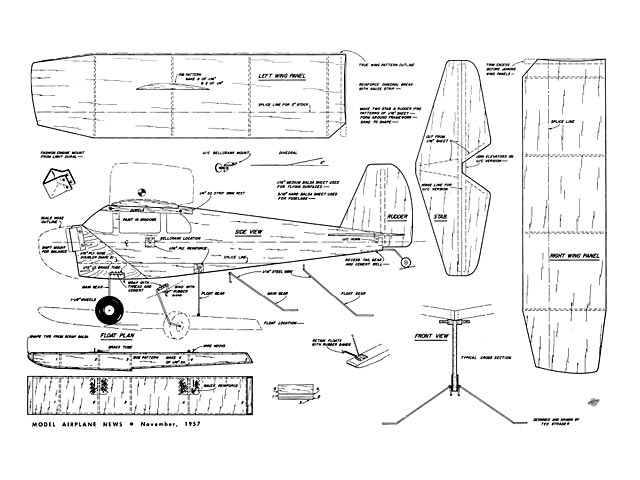 Quote: "Thin-man version of Luscombe lightplane makes a quickie flier for those .049 engines. All wood construction. For land or sea and, if you are stubborn, ukie, too. Profile Silvaire, by Ted Strader.

As profile models go, well, most of them don't go very far. This was our goal in designing a thin version of a one time popular light plane, the Luscombe Silvaire. Discounting actual drawing and scaling time, our Luscombe was extremely 'kwik' to build. Once built it began to show spooky tendencies to out-perform most of our earlier profile attempts. The glide soon indicated that if we were to accomplish our intent of arm chair flying, the .049 would have to be replaced.

We hasten to add that the model will handle an .049 with the greatest of ease if you are the hiking and outdoor type.

For test purposes, we pressed our ole' trusty K&B .035 into service, leaking glo-plug and all. It was a cloudy, mild calm day when the first ROG attempts were made. Three starts later bore fruit, when, with all adjustments made and the .035 protesting the bad plug vehemently, our hero coughed and wheezed itself through a one-wheel takeoff and climbed laborously to a little less than 400 feet.

Now, according to plan, the model was then supposed to rewind itself back clown and come to rest not more than 150 feet away. Why not? This is a profile model, and profile models aren't supposed to fly too well. At least very few of mine have in the past. But this little clown hadn't been paying attention! For there, before a pair of unbelieving eyes, was beginning to vanish one cherished engine, some of Testers best balsa and a varied assortment of heterogeneous parts that, from a distance, looked somewhat like an airplane.

A few feet shy of a mile later, our hero was discovered resting unceremoniously between two furrows of plowed ground. Stifling an urge to plant it on the spot we returned to the scene of the crime and promptly changed engines.

With our equally revered K&B .020 up front it was now possible to accomplish what was originally intended; to fly from an easy chair! The rest of the afternoon was spent hand launching and then watching as the little craft wound its way up to a height of about 100 feet and then glide in almost the exact path hack down and land not owner 150 feet away. This was fun! Construction of the Luscombe Silvaire follows a pattern similar to any other profile. A few hints might help the newer members of the hobby..."

Hey, Scanned another one by Ted Strader, from MAN, November 1957. A semi-scale profile Luscombe Silvare for .020 free flight, with pontoons. I scaled up the mag plan 300% which looked right based on the stated wheel diameter.
I just have the Ryan ST and the Go-Wind left for you, and there is one called the 'Gnome' if anyone has that kit plan. It's a lot like the Ace
'Guppy'. Dave 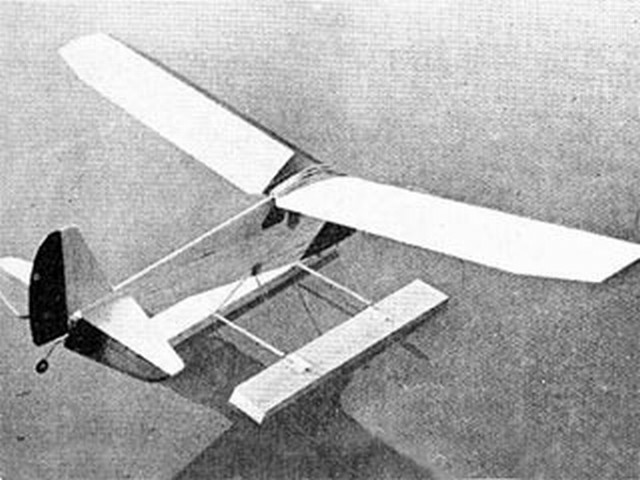