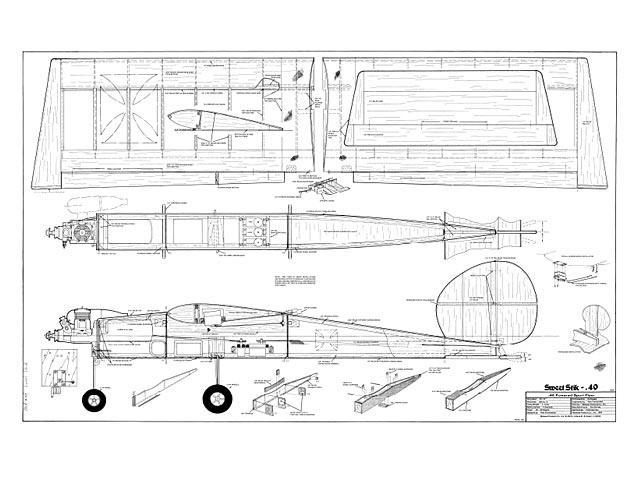 Quote: "Here is a pdf file of the Midwest Sweet Stik, the later version that Midwest came out. I think it's the easiest Sweet Stik to build, and is quite a bit simpler than their original Sweet Stik (oz9068). About the only thing I'd change is I would not put dihedral in the wing. It's a great flying plane. Larry" 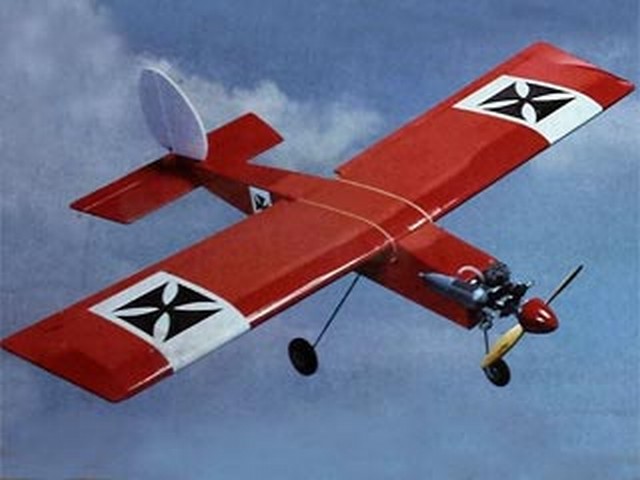 If I remember right, this model was the last kit I ever built, sometime in the early '80s. As kits go, it was decent, nowhere near the perfection demonstrated by the Jensen 60 size Ugly Stik, but then nothing else was either. That's why Outerzone is such a pleasure, so many plans available for classics from years gone by, and I'm able to pick my wood instead of relying on the parts in the kit. I refuse to pay little Chinese fingers to do something I enjoy doing myself. I built my Sweet Stick upside down as a low winger with gear in the wing, a popular option at the time. A Super Tigre 46 pulled it just fine, one of the best engines I ever had, sorry I sold it with the plane. My brother was going to school at Auburn University at the time, and he mailed me two large tiger paw decals as a joke, knowing I was an Alabama fan. I called his bluff, sticking them down on the wingtips as insignia. Fuel would dissolve the water slide decals anywhere else, but they survived for years on the wing. Later, I enlarged the plans by 150% for a Webra Speed 61, flew every bit as well as the 40 version. Really a little too big for the Webra, the club member I sold the plane to installed an OS 90 which was what it needed all along. I did learn a valuable lesson with that larger model: Don't paint outside. I didn't have enough room to paint inside with a small spray gun, and so I waited until late in the afternoon to lay the wing on two sawhorses in the front yard, no wind by this time of day. Everything went fine as I sprayed a perfect coat of clear K&B epoxy on the wing top side, having coated the bottom the day before. While admiring my shiny handiwork, about 50 little black gnats made a carrier landing in wet epoxy, and that's where they stayed. Nothing left to do but let the whole sticky mess dry and sand the gnats out the next day. Another coat of K&B restored the shine but it never was quite as good as the first attempt. It's always something...
DougSmith - 29/11/2016
A few pictures of the a Sweet Stik 40 I built following (approximately) the later version by Pete Frankenthal [more pics 003-007]. Power is an OS Max 46 AX, radio is a Futaba Skysport 4. Changes made were building the wing flat, utilizing two servos in the wing instead of torque rods, using wing bolts to hold the wing on, and substituting 3/16 balsa for the fuselage sides and bottom instead of using lite ply. The servos were installed 3 abreast as shown on the plans, there was enough room behind the servos to install a flat battery pack. This was a necessity to balance the plane, as the plane came out quite nose heavy with the set-up shown on the plans, which I attribute to the lighter engines of the day when the plane was originally designed. It flies very fast, smooth, and is capable of doing most aerobatics on the power setup shown.
LarryFurse - 29/08/2017
My dad built two of those from Midwest kits. The first one was powered with an OS40 engine and flew very well. But even with this comparatively light engine, it came out quite nose heavy. I am not sure what happened to the fuselage but I Iater reused the wings to build a Kwik-Stik (OZ 6158) on flloats.
For the second model, he covered the fuselage with light fiberglass to make it more durable and bring the CG further back. But this was not enough to compensate for the weight of the Saito 40 4-strocker installed on this model. Therfore, he attached a rather massive aluminium tail skid underneath the horizontal stabilizer. He flew that model for a long time, until the day when the horizontal stabilizer departed in flight. The vibrations from the engine, the heavy tail skid and probably a less than perfect glue joint caused the demise of that model.
Juerg - 17/10/2020
Hello. I thought I would send you a couple of pictures I took of my Midwest Sweet Stick built from the plans I downloaded from your site.
I added dual aileron servo's and made the wing bolt on. Also Converted to tail dragger. Power is one of the Chinese made Super Tigre 40s from Tower Hobbies before they tanked. It came out a little heavier at 6 pounds because of the poor quality wood I was sent in my wood order from Lone Star Balsa before they went out of business. But on the other hand it was my best windy day plane. Thanks,
ThomasT - 24/05/2021
Add a comment