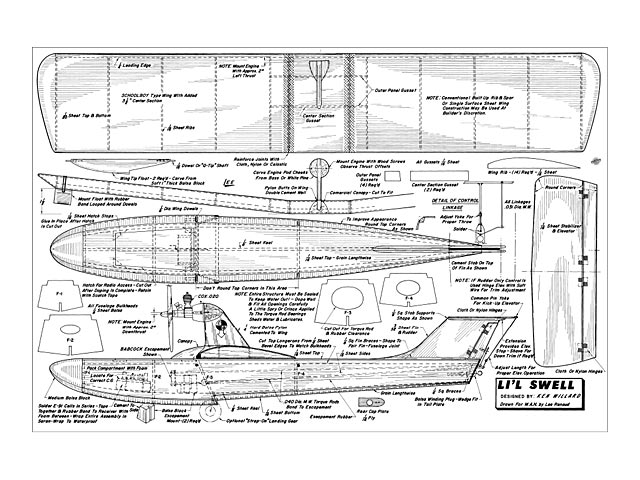 Quote: "For you modelers who have a small lake or reservoir nearby - or for that vacation at your favorite lake (when the car is so full of the family junk that you don't have room for a big model) here's the Swell, an .020 job that will give you some real kicks.

You might be interested to know that four versions were tried before settling on the one in the plans. They all used the same hull, but the difference in flight characteristics and water handling was unusual.

The first version was a pusher. Although it worked, it was too sensitive to balance - especially in the transition from power-on to power-off flight trim. Also, the pusher arrangement tended to make the engine overheat, and the power would sag.

The next version had the engine in back of the wing, but in tractor arrangement. This gave plenty of power, and again was even more sensitive to the thrust adjustment. Although these two designs had the advantage of protecting the engine and propeller from the bow wave spray on takeoff, they were discarded because of the tricky flight adjustment.

Next a conventional tractor, with the engine on a pylon above the wing, was set up. It flew very well, but water takeoffs were marginal at best. The hull needed a longer nose, and the step was too far back.

Rather than make a new hull, since the moment arm was ample between the wing and tail, I relocated the wing aft, re-balanced the model, and tried it again. The difference in water handling was immediately apparent. Takeoffs were excellent, and landings smooth. And although the model is perhaps a little short coupled, it handles unusually well in the air. So that's the final version you see in the plans. Here are a few construction hints:

Wing: Construction is conventional, and the choice is yours. In my prototype I used a Schoolboy wing with a 3-1/2 in center section added. It's rugged, light, and quickly built. You can make a regular rib and spar wing if you prefer, or for that matter a single surface wing from 3/32 flat stock and ribs to provide the undercamber. The only caution is that the wing must be sealed so water doesn't get inside the structure. Some designers advocate doping the structure inside and out, and putting pinholes in the surface at the trailing edge to drain water. I prefer to seal the water out to begin with. It's less work.

Wing floats are carved from lightweight balsa blocks; 1/16 dowels, about 1 inch long, are inserted front and rear, and the tip float is strapped to wing with rubber bands. If you can't find 1/16 dowel, the wood shaft on Q-tips works fine.

Pylon is cut from 1/4 in hard balsa. Bottom is butt-glued to the top of the center section. If you've carefully tailored the curve to fit the wing, and double glue the joint, it will hold through any normal flight or handling load.

The streamline cheeks behind the engine are shaped from basswood or white pine. Then you can mount the engine by using two small wood screws. Maybe it isn't conventional, but it works.

Empennage: Vertical fin and rudder are cut from 3/32 stock; hinges are either cloth or nylon. Fin is butt-glued to the top of hull, with 1/8 sq braces alongside. For neat appearance, outside corner of the braces can be cut away and sanded so the braces fair into hull and fin..." 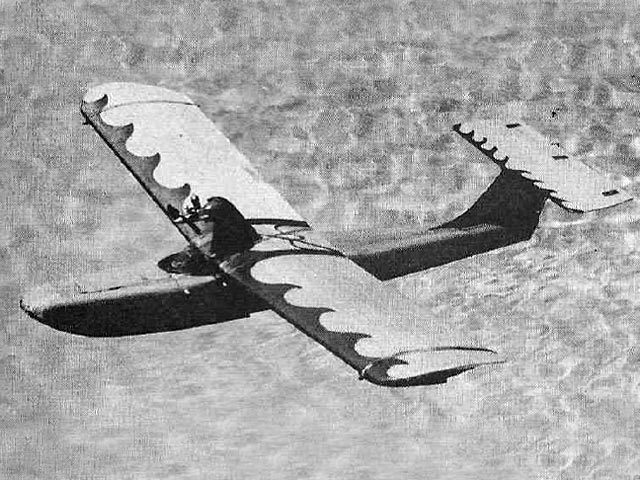