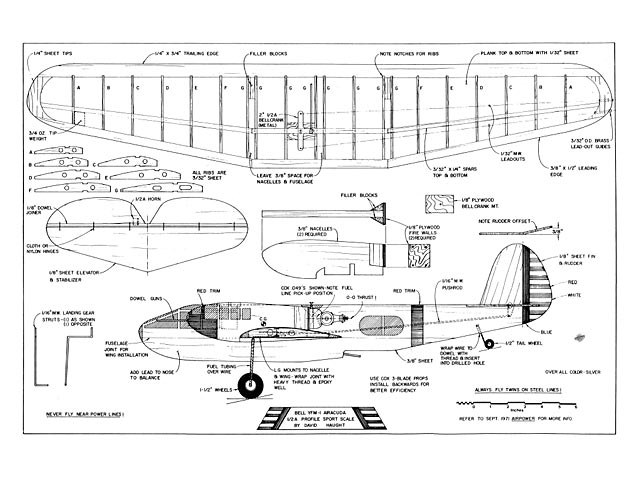 Quote: "Powered by two Cox .049 reed-valve engines, this profile-fuselage Control Line Sport Scale version of a neat plane from the Thirties is easy to build and great fun to fly. It'll be a sensation at the flying field - both from appearance and sound of the twin engines. Bell YFM-1 Airacuda, by Dave Haught.

THIS AIRPLANE has to rank high among the list of unusual and fantasic designs in aviation history. It is almost immediately recognized as a product of the 1930s, a period of time when all our efforts were striving for the future.

The Airacuda's appearance in its time was, to say the least, shocking. Imagine seeing it parked next to a contemporary biplane fighter of the day, a Curtiss Hawk. The contrast gives one a taste of just how advanced the Airacuda was.

Designed to fend off the threat of enemy bombers making attacks on the American coast, the Airacuda would have filled the role well had it ever been needed. As it was, the Airacuda never fired a weapon in anger. If it had seen combat, it would have been awesome indeed.

An enemy fighter would have little chance of escaping the blast of the Airacuda's twin 37mm cannons and twin 30-caliber guns, all automatically locked onto target. Firepower was of primary concern in its design, and it could deliver it. With a top speed of 270 miles an hour, the Airacuda would have been a very formidable adversary.

In all, fourteen Airacuda's were built, none of which presently exist. The contributions the design has made to the aviation industry still continue, while the design itself still haunts a few of us.

The Airacuda found a soft spot in my mind. Several odd pictures were all I could find on it for several years. Dozens of letters to different archives turned up little. In September of 1971 a copy of Airpower featured the Airacuda story. It was enough to keep me up a few more nights writing for information.

Alas, not a decent three-view drawing could be found. The dreams of a super-Scale Control Line Airacuda would have to wait. But I couldn't. I had to build it. I decided to build it as a profile Sport Scale model to see how it would fly. The results were super! It not only flew well, but it has magic only a twin has. The Airacuda is very maneuverable. It will even loop on one engine.

With the distinctive sound of the two engines in harmonious sync and its unusual planform, the Airacuda gets a lot of attention on the flying field. Few people recognize it by name, but those who read the magazines in the early war years will probably remember it.

Building the Airacuda should present no special problems. Twins, in general, have a few traits to keep in mind when you build them. With two engines not only does the available power double, but so does the accompanying vibration. It is important that you take care to ensure good, strong glue joints at all locations.

Some of the Airacuda's structure may look too beefy, but it's that way for a reason. Aerodynamic loads are also increased in twins. The original model began to show stress cracks from loops, so I had to plank the wings with 1/32 sheet. As shown on the plans, the construction is quite adequate, yet simple.

The wing is a good place to start building. Cut out all the parts, add the notches to the trailing edge, and begin construction. Pin the leading edge and trailing edge to the plan..." 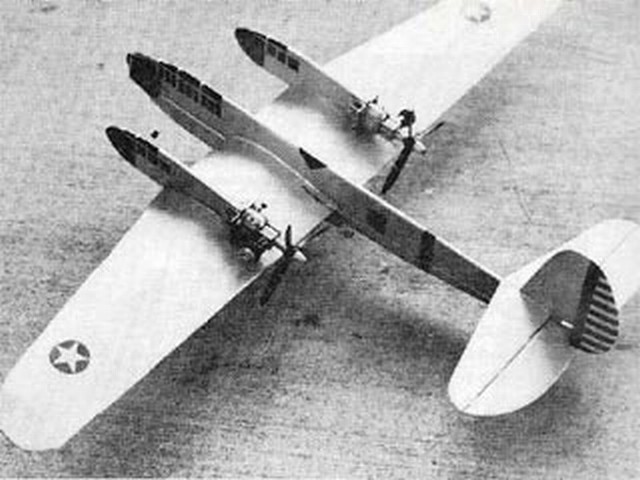