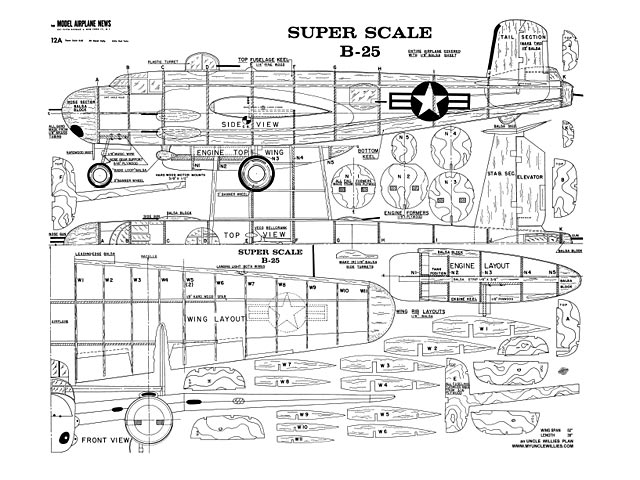 Quote: "Our author is not new to this super scale business but has exceeded himself with this magnificently detailed model of the WW II Mitchell B-25 bomber, by Florian Piorkowski

The North American B-25 Mitchell had three historic firsts to its credit during World War II: The first USAF bomber to sink an Axis U-Boat after the start of hostilities. the first AR bomber to attack the Philippines since their capture by the Japanese and its most famous first: the attack on Tokyo by General Doolittle!

It served in every theater of World War II as a superb medium bomber with tremendous firepower. Powered by two-Wright Cyclone CiR-2600 Fourteen-cylinder air-cooled engines developing 1700 hp at 2500 rpm. Maximum speed is 300 mph with a range of 1,728 miles.

The fuselage is started with two keels as shown on plans. Both top and bottom keels are made from 1/4 in pine wood. Lay both keels on plan outline and pin. Next, cut all fuselage formers from 1/8 or 3/16 plywood. All formers are made in half sections as half of the fuselage can be made dtectly on plans. When one-half section of fuselage is complete, remove from plans and build the other half.

Side stringers may now be added for strength 1/4 x 1/4 as shown. Now we are ready to install the main and rear wing spars. Both can be made from 3/16 or 1/2 in hard wood. Front spar is attached to F-5 and rear spar is attached to F-6. Both of these spars must be properly lined up so one wing is not higher than the other. Next step is to place engine formers N-3 and N-4 to both of these spars. After these sections are all lined up we can start placing wing formers on spars. These formers can be made from 1/8 hard balsa. Formers N-2 can now be placed on motor mounts placed in nacelles. When motor mounts are placed into position, be sure to place 1/2 in stopper in front and rear of N-3, then screw into place to prevent mounts from vibrating loose when engines are in operation.

Bottom engine keels can now be put into position to give strength to engine nacelles. Both keels are made from hard wood. N-1 can now be glued to motor mounts also N-5 can be installed into position and glued to engine keel. The hardest part is now completed, be sure that the structure you have finished is straight as this section will determine the flying ability of your plane..."

Alternate version of the same plan. 2 sheets. Uncle Willie drew this one up with a 2nd reversed sheet, so both port and starboard wing layout is shown. 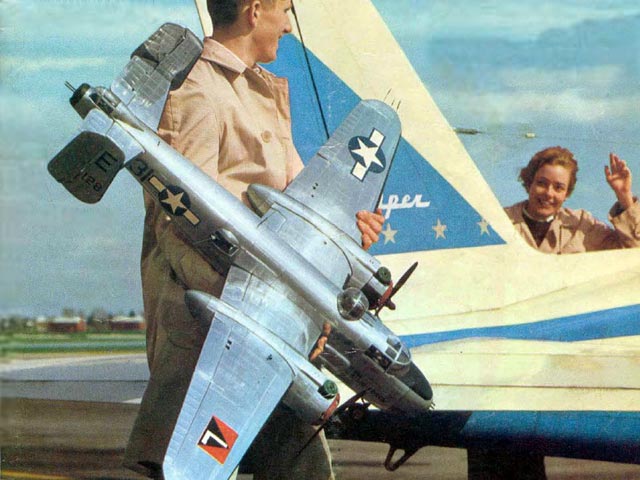