Quote: "Another from Tony Mellor! This time, a delightful 1.5cc aerobat.

Sprite is the result of a desire to build and fly a model capable of the effortless aerobatics of a slope soaring glider, without having to wait for the wind to provide the right direction or speed to make this possible!

A look round the pits of the local club where I usually bungee launch my thermal soarers gave me the impression that the models being used were too large and overpowered for my liking so, with some previous small aerobatic slope soaring models in mind, I decided to use some glider technology to design a similar sized, fast aerobatic powered model. Also, the only engines I had were left over from my control-line and single channel radio days some 25 years ago. That must say something about the addictive qualities of glider flying! These engines were mainly diesels, AM 15 and 25s plus a few which are now collectible types that I didn't really want to use. A quick bench run with one of the AM 15s convinced me that it would provide ample power for what I had in mind so this size (1.5cc) was chosen along with a wing span of 36in-40in to make the best use of standard balsa sizes.

A few rough sketches plus laying out engine, tank, radio, batteries and servos soon proved the idea to be feasible at a span of 39in. The model owes its lines mainly to my soft spot for the full-size American small pylon racers (Cosmic Wind, Midget Mustang, etc) and also to control-line stunters I have flown in the past.

The wing section is pure glider, being the Eppler 374; this has a high lift-to-drag ratio and a good inverted performance due to its semi-symmetrical form. By mounting the wings glider fashion on piano wire dowels either side of the fuselage, the whole of the fuselage interior becomes available for fuel tank, radio, batteries and servos. This then means the fuselage can be quite slim and in keeping with the rest of the aircraft whilst still taking standard size radio gear.

Construction is entirely conventional from ply and balsa, the prototype being built over a period of approximately two weeks using mostly cyano for speed of construction. The performance is everything I had hoped for and she really looks the part in a fast, low turn with lots of bank on. 'Sprite' is also very aerobatic, being capable of all the looping and rolling manoeuvres and their combinations. Control response as would be expected is very quick and positive but without being 'twitchy', with the two controls harmonising very well throughout aerobatics and normal flight.

As 'Sprite' is not a beginner's model I will assume some building experience has been gained and not go into fine detail in the building instructions except where I feel it will be helpful. And so to construction...

Fuselage If you buy two sheets of 4in x 1/8 x 36 in balsa for the sides, with careful cutting, there should be enough 1/8in sheet left over for almost, if not all, of the remaining parts of the aircraft. Commence by cutting out the sides and mark on one of them a line at the front edge position of F3 and another line at 1-1/8 in down for the bottom edge of the servo mounting plate. Now a slight diversion; cut the two 1/8in ply R1 wing ribs needed and accurately drill the mounting tube holes in these as a pair. One of these is now used to jig drill similar holes in the marked fuselage side..."

Quote: "Hi Steve, Here is a copy of the 'Sprite' - a free plan from August 1990 Radio Modeller, designed by Tony Mellor, originally for 1.5 cc diesel engines. I think that this model design stayed in my memory as it was such a simple design for that time, and had the first R/C wing that I'd seen without spars - I had started R/C modelling and flying the year before as far as I can remember. Hopefully this plan will jog some memories and be of interest to Outerzone users. My copy of the plan had become rather disturbed over the years so the attachment has some areas that I have redrawn. Everything seemed to line up afterwards, but normal cautions and warnings apply. Thanks so much for the Outerzone, keep up the great work. Best regards, Paul" 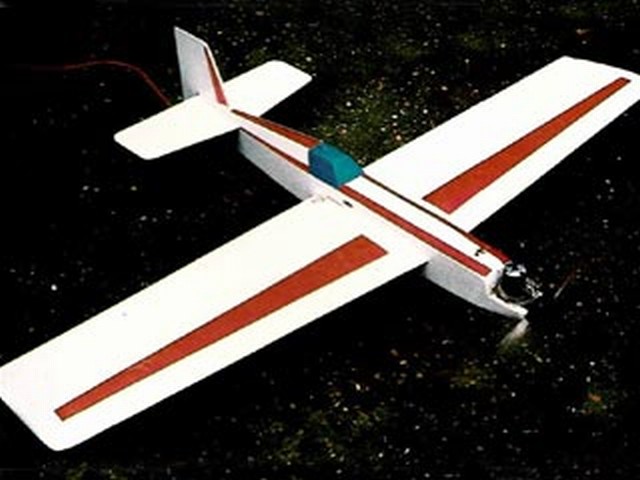