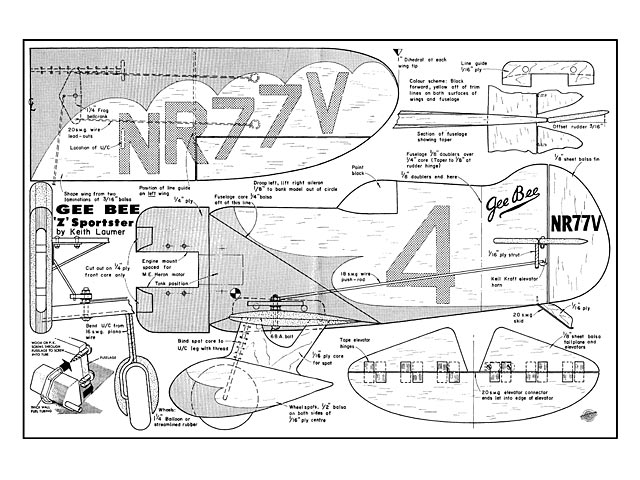 Quote: "IN OUR World News feature for February this year we mentioned the Thompson Trophy racing events which are run by the Vancouver GMC in Canada. These are for 2.5 cc models, profile or full fuselage to 1/12th scale which race together over 160 laps at 52 ft 6 in radius. Object of the event is to provide something of less exotic proportions than the refined team racer, which is easy to build and operate, giving the novices an opportunity for full success.

Why not try a Profile Racer? The Gee-Bee 'Z' racer, which follows on the next two pages is a handsome start. Our suggestion is for no particular limited tank size, but a 0.75 cc or 1.5 cc limit on engines according to the whims of your club. Models do not have to be to precise scale and can fly on a common line length of 30 ft or 35 ft, according to the space available. A contest can be run on team racing lines with a crew of pilot and mechanic endeavouring to achieve the fastest time over 100 laps or more. Set the rules to suit yourselves.

Build K Laumer's Gee-Bee Z. Keith Laumer provides us with a very neat little racer which is right in character for a start. Why not try the idea in your club and let us have your suggestions for a specialist set of rules once you have given the event a trial? Some Profiles are to be seen in our heading. These are the Post-War midget racers from the USA and if enough of you ask for more in this suggested model class we can easily include some 3-views of suitable subjects - name your particular choice if you have one - lets have your opinion.

Ready to start? Trace out the components onto the wood with a carbon paper impression. Cut them out, using a fret saw for the 1/4 in ply and balsa fuselage centre core and 1/16 ply spat cores. Now bond the two wing laminations. Use PVA white glue for this and other laminates since it dries much slower and is less prone to warp than balsa cement and by the time you could coat the laminate surfaces with cement, the latter would be drying off. Allow the wing joint to dry under pressure, a pile of books will be a suitable weight. Note when making the wing that 3 inch wide balsa does not quite cover the whole wing chord so make up the trailing edge with 3/16 in sq strip.

'Pre-cement' the end grain of the joint between the two pieces of the fuselage centre core. If you do not understand this operation, all one has to do is to coat both faces of the joint with cement and allow it to soak into the wood and harden for a couple of minutes. Then cement again and join, flat on your building board.

While wing and fuselage core are setting, make up the tailplane and elevator unit, separating the two down the hingeline. Shape the 20 swg wire elevator joiner and apply by piercing each elevator half with a joiner prong. Add the tape elevator hinges and join to tailplane in 'clothes-horse' hinge fashion..."

Quote: "Hey there, I was reviewing which plans you have posted by designer by Keith Laumer and you seem to be missing just ... the CL profile scale GeeBeeZ, published in your UK 'Aeromodeller' in April of 1962. AFAIK, this would complete your catalog of published designs by Keith." 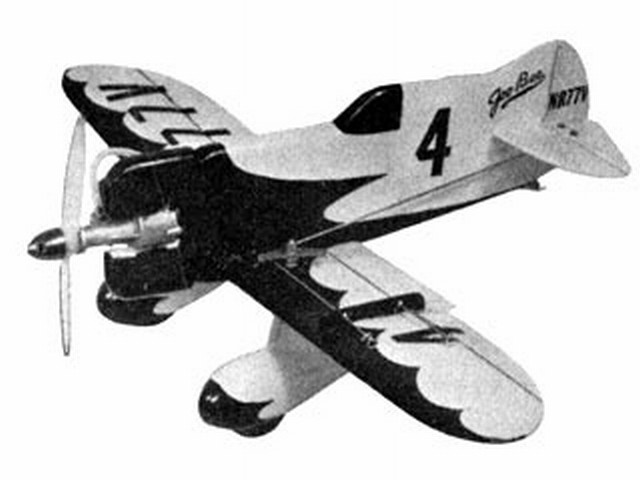 Hola Mary - you post a Gee Bee and I have it hanging in my workshop and I have a photo and once in a while I fly it ... I send it to you and so the plane 8199 will have a photo! [more pics 003] That plan was published in the sixties in the Spanish magazine Flaps and was one of the first models that my brother and I built then painted in red and silver. Photo to the gallery! Saludos.
AntonioRG - 25/11/2016
Add a comment