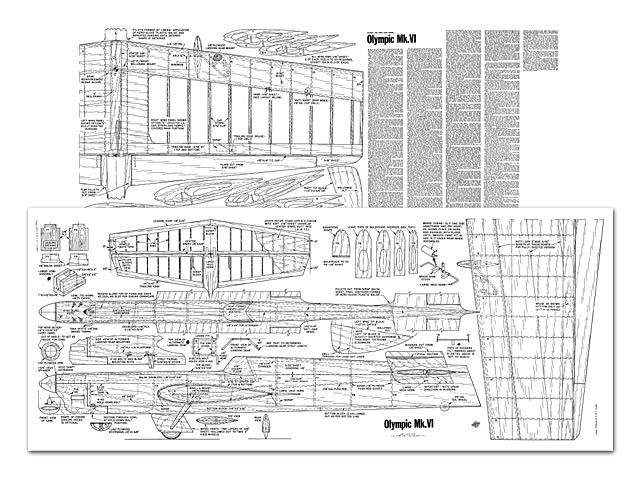 Quote: "On the Mark VI Olympic I have used an 18% thick airfoil with max thickness at 30% of root chord. At the tips, 19% with maximum thickness at 25%. Looking at the shape of a non-symmetrical section of a light plane, when viewed from the trailing edges, both tips are washed out (bent up). This is done so that when the aircraft is at its rated stalling speed, the tips have not reached stall angle and stability with relation to the roll axis remains. To achieve this same effect with a symmetrical airfoil, the thickness percentage at the tips is greater than inboard with the maximum section closer to the leading edge. Therefore the tips stall last or at a higher angle of attack assuring some tip lift to resist engine torque. To prove this point, while flying one of my older Mark II Olympics I let the engine quit while the plane was quite high. During the landing approach I gave excessive up control to stall the airplane. I experienced a very severe roll, first toward me and then away. With the improved airfoil, my Mark V can be stalled with the only effect being an extremely mushy approach.

On the plans I have offered an alternate type of landing gear. The first design series used the fuselage gear incorporating a torsion principle which does a fine job of absorbing landing shocks. Its drawback was that when the gear was loaded as in a bump, it returned with authority driving the plane back into the air. This occurs on hard surfaces, not on a grass field. If the majority of your flying is off the grass, the torsion gear is then best for you.

On the Mark VI I switched to the swept-in wing mounted gear in my search for better landing ability on hard surfaces. When flexing to absorb the shock of landing, the gear has to be in a position which will not transfer the shock into the plane. If you trace this shock line, you will find that the straight-ahead gear has to spring forward to absorb this shock and has to flex farther for a given amount of load. With the swept-in gear, the motion of the gear is 90deg to the shock line and its movement is not as great for the same amount of load. The secret is that the shock line is not straight up but somewhere around 45deg. Most straight-ahead gears are at an angle of 45deg and in direct alignment with the bump load.

A slightly stiffer gear has to be used in the wing for good ground stability. It also tolerates a much faster landing speed..."

A classic plane has come back from the past. Brodak Manufacturing Company has put Hall of Famer Bob Gialdini's Olympic Mk VI in kit form for all to enjoy.

Before I started this review project, I called Bob Gialdini in early November to talk about the plane's success story. He built the first Olympic in 1957, which was a 34-ounce model. In 1959, Bob refinished the plane and increased the weight to 51 ounces.

I personally built several heavy models of the Olympic back then but ended up using them for bookends. If you ever read the article on the Olympic in the 1963 American Modeler Annual magazine, Bob explains the yaw, roll, and pitch of the model and the CG, and the barbell effect in sketch form. In the layout picture of the kit you will see the orig-inal 1963 cut away drawing of the model in the centerfold of the magazine, which was nicely drawn 40 years ago.

Now let's get to today's kit. In the spring of 2003, I became interested in doing a product review. After talking to Vic Macaluso about my interest, he advised me to call Frank Fanelli, the editor of Flying Models. After a few phone calls to Frank, I was on my way to doing a review on Brodak's control line kit of the C/L classic. Within two to three weeks after making the connection with Frank, the Olympic kit arrived.

After opening the kit and laying out the plans, wood, and hardware, I found the quality of the wood to be excellent. The step-by-step manual with pictures was easy to follow. The pictures and the plan were nicely detailed. The only problem that I found was that the canopy was for the round turtle deck. Somewhere in the production of the kit there was a change to a razor back deck. Bob Gialdini had made six different versions of this model. This may have caused the problem with the canopy. I called John Brodak and discussed the problem with the canopy.

The outcome of this conversation led to John making a new canopy, which he sent to me. The correction was made in October of 2003. If you have one of these kits with the rounded canopy, do not hesitate to call Brodak Manufacturing and a new updated canopy will be sent to you. You can find the phone number in the back of the manual.

As for myself, being a scratchbuilder for years, I had to focus on building a plane from plans and a manual. As previously stated, the step-by-step manual was easy to follow. As with any kit, building it straight is very important. The fuselage sides were already pre-cut but I still had to put them together to check for straightness. I used all center lines for everything. The control system in this kit is a system that was used 40 years ago. I chose to use the more modern Tom Morris system of today..." 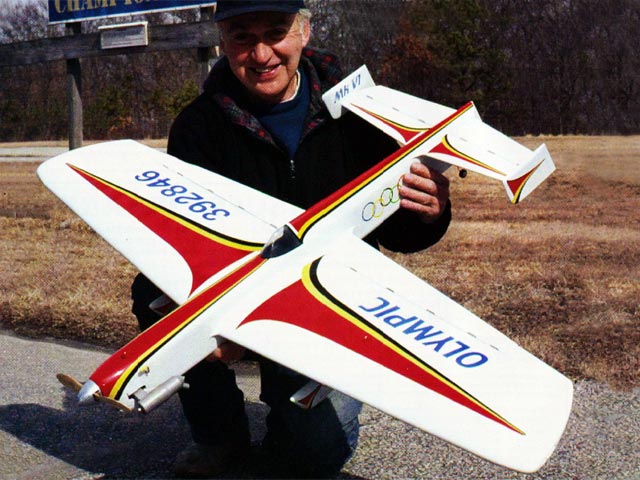 This is my Olympic Mk VI, built from Outerzone plans [more pics 003, 004]. I finished it to resemble Mr. Gialdini's model from the 1960s.
DougB - 08/01/2019
I come late for the party but fine work Doug! These C/L aerobatic models all sport gorgeous finishes, is this some tradition for the class, is it rule mandated or what?
Miguel - 08/05/2020
Miguel, for the AMA control line precision aerobatics class the models are given appearance points plus a flight score for each round flown in the event. If I remember correctly 20 points is the maximum for appearance, the judges rank the models by appearance and line them up accordingly in a large room, it is a sight to see.
Douglas Babb - 09/05/2020
Thank you Doug, I do believe a display of models of the quality and taste levels as yours has to be impressive. If this is the outcome then It must be a good rule :-)
Miguel - 10/05/2020
Hello Mary, Please find photos of the Olympic Mk VI built by our late club member Allan Perret. He was an avid stunt flier and attended many contests [pics 008-010].
EdShearer - 22/06/2020
Add a comment