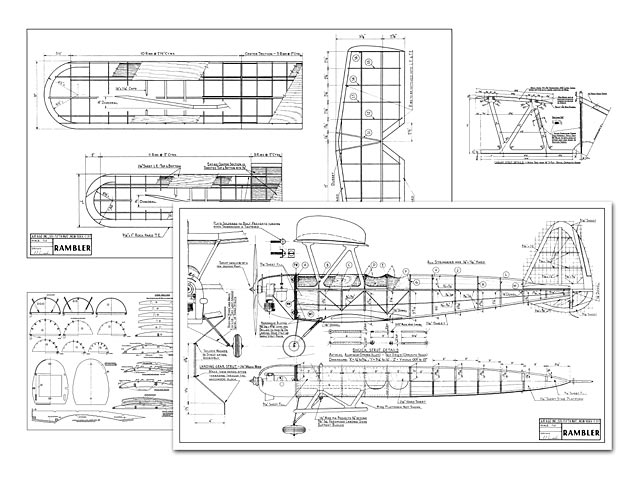 Quote: "Of all the model aircraft I have designed, built and flown over a span of some twenty-odd years of active aeromodelling, few indeed have equalled this biplane for realism, performance and the fascination of flying an airplane. Because the 'Rambler' is, and will probably remain, one of my greatest favourites, the drawings were prepared with rather more than the usual complement of full scale templates. This was done so that construction could be undertaken by both novice and expert builders with a minimum of tedious drafting.

Oh yes - a last word before getting down to work. An unkind person once suggested that a better name for a model of this type would be Dodo (being a rather labored way of intimating that all bipes were as dead as one). To the contrary, facts show that even in these days of Shooting Stars and Meteors, Mustangs and Spitfires, the slower bipe is still being built and flown commercially. In certain specialized fields of aviation, notably flight training, the biplane has no equal.

Just for a change, it is suggested that all the full size templates on Plates 1 & 2, ie fuselage formers, ribs for upper wing, and stabilizer ribs, are transferred to balsa and cut out. Formers A to E should be of laminated balsa made by sandwiching 1/16 sheet betyveen two sheets of 1/32 applied crossgrain and allowed to dry for five or six days under a weight. All other formers can be of either 1/8, 3/32 or 1/16 sheet, depending on the density of the material. While the stabilizer tip and center ribs should be of 3/32 sheet, the remaining ribs can be cut from 1/16 medium without sacrificing rigidity.

Lay out the cabane struts on 1/8 three-ply and saw them out. Be sure the drawing is properly understood before attempting to bevel the bottom edges. Make the wing bearers, or skids, and mortise them carefully to receive the tenons on the cabane struts - the strength of the entire wing mounting structure will depend on the accuracy and fit of this joint. Use a full size rib template to scribe in the proper contour along the top edge of the skid, but remember to allow for the 1/16 hard sheet wing platform and take care to cut on the exact bevel shown on the drawing. The best woods to make the skids are either poplar or American whitewood; but basswood, though rather soft, is quite usable. Before assembling the structure, cut two slots into each plywood strut-base to allow formers B & D to slip in egg-box fashion.

Make a full-size layout of the stabilizer. Preform both the leading and trailing edges, leaving them slightly oversize, and then assemble. Don't try to save time by omitting the notches in the TE for the ribs - they contribute much to strong, warp-free construc-tion. When the cement has set thoroughly - takes about 24 hours - remove the structure from the board and finish off the stabilizer by adding the solid carved tips and sanding it carefully all over.

The fin is shown superimposed on a grid of 1/2 in squares - this will materially assist in drawing it up full size. Fin components may then be cut out accord-ingly and assembled. The fin should be finished off with sandpaper before it is cemented to the stabilizer.

Make a plan of the top wing conforming to dimensions on Plate 2. Preform the trailing edge components and wing tips, and select the spars required from fairly hard straight-grained stock. Pin down the TE and LE over the drawing..." 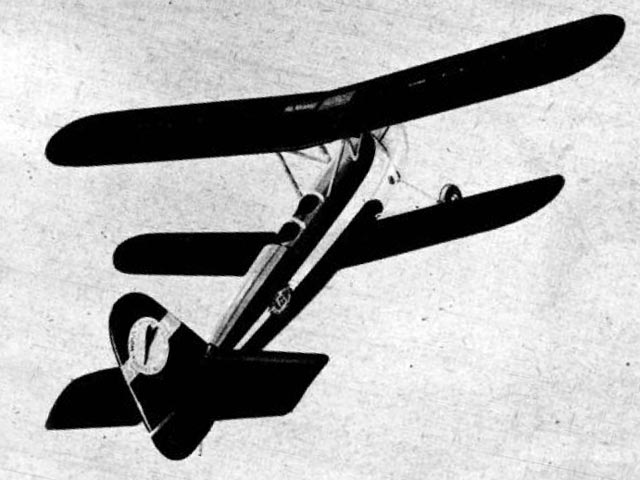