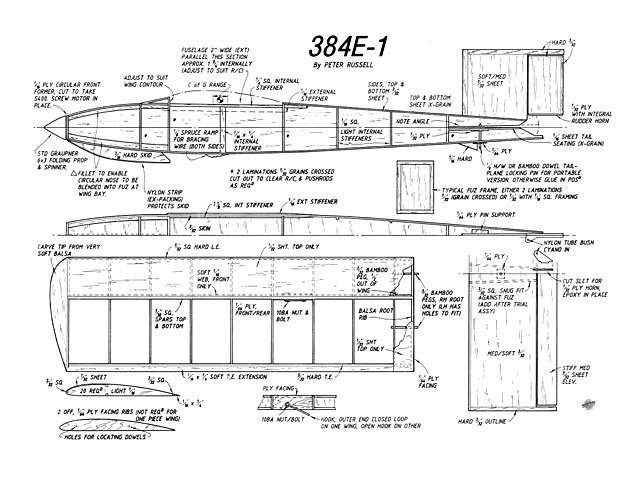 Note although the plan is billed as electric, the article text and photos also show an earlier model with 1cc diesel power, along with the later speed 400 electric version.

In spite of our group taking great pains to avoid upsetting the neighbours (there are some houses about 1/4 mile from the field), with all engines properly muffled, no flying at 'unsociable hours', et-cetera - one particular householder was making trouble for us. You know the type: "If I see somebody enjoying himself, I'm going to put a stop to it."

We were talking this over one evening and somebody said. "What we want is some sort of 'Stealth' model." The Americans were making a lot of fuss about their new 'low observable' military aeroplanes at the time. It was around the same time that I got addicted to country walks and often wishing I'd got a model with me to have a 'quick buzz around'. So the idea developed that a small, inconspicuous, very quiet, hand-launch and belly-land model that would pack away into a reasonably small box might be useful for more than one reason. The result of all this cogitation was the '384A'. a 32in span, ultra-simple type with (intentionally!) folding wings and a removable tailplane so that it would pack into a box 25 x 6 x 4-1/2 inches.

The engine is an ED Cadet 1cc diesel which itself had been designed to be as quiet and easy to operate as possible. So it came about that I often set out on my walks with the fairly inconspicuous box and could rig the model and fly whenever I found a suitable spot - which was often. The model was quite trouble free, but the smell and irritation of the diesel fuel rather took the shine off it. Also, even the quiet Cadet still made the model more conspicuous than I thought acceptable for this sort of thing.

Then, finally, one of my friends got caught up in the 'Speed 400' craze, then in its early stages. He built a model for this motor, about 36in span and 200 sq inches of wing area which flew quite well, and most important it made virtually no noise at all! Putting all this together it seemed we had the ultimate 'Stealth' model aeroplane, so I quickly made a new body for the 384, identical to the original apart from the obvious differences of the engine/motor mount at the nose. The same folding wings were (and still are!) used.

To reduce conspicuity even further, I left the whole model in natural tissue/wood clear doped finish. This certainly works, though it does make it a bit more difficult for the pilot to work out whether it's coming or going! On the other hand, I have often been operating from a footpath or whatever and passers-by have given me funny looks, wondering WTH I was doing standing there holding that black box with silver pole - having failed to realise that there was a model aeroplane nipping about up there in the wild blue yonder!" 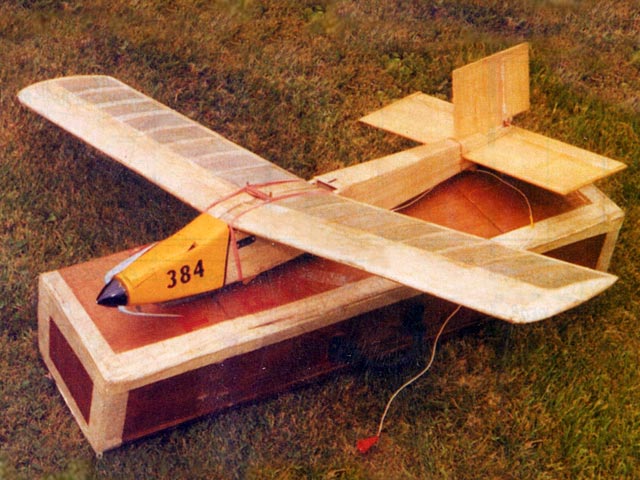 Hello Mary, Steve, I've found an interesting note from the designer in RCM&E october 1997, a year later. It reads, on page 58: "...he has just built one of my 384E designs and was puzzled by the erroneously marked C of G on that jinxed plan." It should be moved much further forward but it but doesn't say exactly where it should be. My guess is to try 25-35 percent of the chord.
Hans J van Tol - 19/01/2021
Add a comment