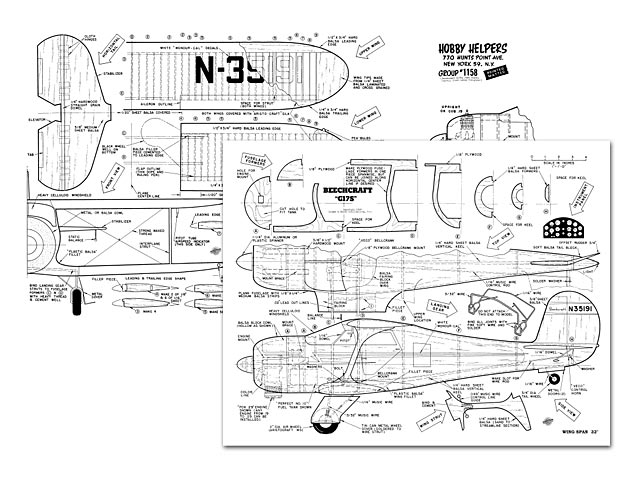 Quote: "To us the most beautiful and distinctive private flyers' production aircraft is the negative stagger Beechcraft biplane. Making their appearance in the early thirties, these craft were improved and refined until the model G17S emerged as the ultimate in perform-ance and appearance.

In 1933, the Texaco Trophy Race at Miami was won by a Beechcraft 17 with EE Wood at the controls. First, second and fourth places were taken by Beech Bipes in the Phillips Trophy Race in 1936. The much sought-after Bendier Transcontinental Speed Dash was won in 1936 by Louise Thaden piloting her C17R.

Famous Jacqueline Cochran set two women's records in her D17W Beech-craft. In 1937 a 1,000 kilometer speed record of 204 mph was established, and again in the same year an altitude record of 30,052 feet was set.

First place in the 1938 Macfadden 1,120 mile Cross Country Race went to Max Constant and his Beechcraft D17W. The New York to Miami race was also won by this pilot-plane combination in 1939.

Our sincere appreciation goes to Vincent Vecchio and LE Huff of the Beech Aircraft Corp. Without their help this article would not have been possible.

Scaled one inch to the foot with a wing area of 240 square inches, the prototype model performs very realistically when powered by a .23 engine. Larger engines up to .35 can be installed for more peppy flying. Despite its one color paint job, the Beechcraft biplane is an excellent candidate for super scale details. Our craft sports a complete cockpit, navigation lights and illuminated instrument panel. Optional, of course. The illustrations are for the benefit of those interested in these details.

This model is of ample size to carry a payload of two small pencell batteries in the baggage compartment for supplying current to the small pea lamps in the wings, tail and cabin interior. The battery box is easily constructed. A switch is optional - we remove the batteries to shut off the lights.

The plans, developed from Beechcraft factory drawings, are exactly to scale including rib spacing.

Construction begins with the fuselage frame. Trace bulkheads and keel onto the prescribed material, cut top shape with coping or jig saw. Cement bilkheads to keel, set aside to dry..." 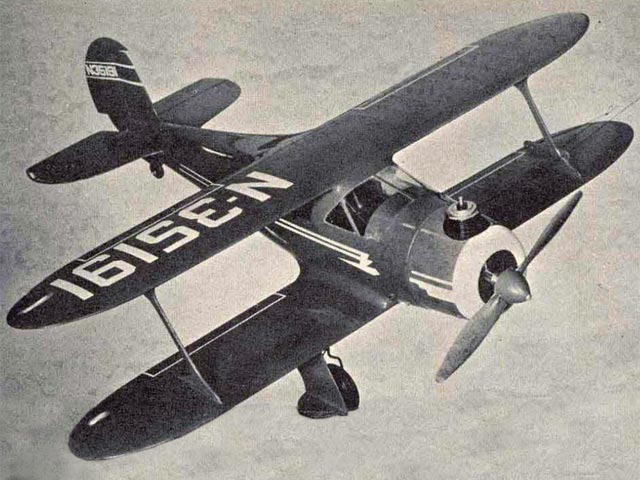