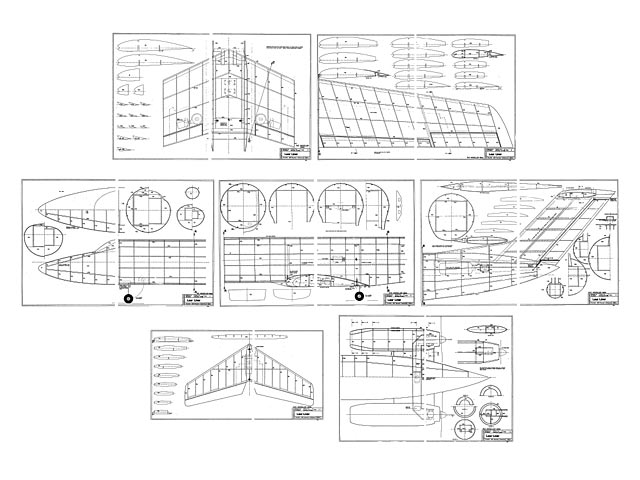 Quote: "The Lear Jet Corporation, manufacturers of the famous Lear Jet, announced their model 40 as a commercial and small passenger-jet in October 1965. Unfortunately, this design never evolved past the drawing board and mock-up stages. The aircraft was intended to be used by 16 passengers in the commercial version and by 40 persons in the airliner version, a relatively small aircraft compared to the newest 'Jumbo-Jets' with over 500 passengers.

Let's now look on the history of our model of the Lear Liner. Designing and building was started on September 30, 1967 by my brother Gerd, who began to build the fuselage by himself. After having finished the inner 'box' of the fuselage, a length of about 1o feet, there was noroom left in our workshop to do anything else than to help him with the Lear Liner! So my father and I started to work on the project out of sheer desperation and necessity for some room to work on other projects.

After the formers and the spruce-stringers had been glued to the 'box' the outline of the fuselage could be recognized. Planking the cylindrical part of the fuselage was no problem, but planking the front and the back part of it wacs rather critical. Ity was then that we designed the wing. The only variation from the full scale prototype was a larger chord at the wing-tips. This gave us a little more wing area, which was very helpful, since the weight of the model was about 25 pounds. For airfoils we used the NACA 4415 in the middle and the NACA 2415 at the wing tips. We also 'twisted' the wing, so that the angle of attack of the wing tips is 1° less than in the middle. This gives us an elliptical lift-distribution over the wing at high angles of attack and at high coeifficient which gives us very good low speed characteristics. Ailerons and flaps are the same as on the original, but they are simply hinged at the top of the wing.

The wing is built tip conventionally from balsa and completely planked. The connection to the fuselage is made by two rigod dowels in the leading edge.

The main problem confronting us in building the Lear Liner was that of power. We intended to use the engines in a pusher configuration, since it was very neat, and because it was the only possibility of using 12in diameter prop. But then we had no 12 x 6 pusher available, so we remembered that it is possible to run an engine clockwise. With the Enya TV II you are able to turn the front part of the crankcase 90 degrees counter-clockwise, which results in the engine turning clockwise as well as it did counter-clockwise before. This makes it possible to use standard propellers.

Static thrust of both engines was about 11 pounds, which results in a true airspeed of about 75 mph..."

Article pages, 18 pages complete, text and pics. Note this is a large file. 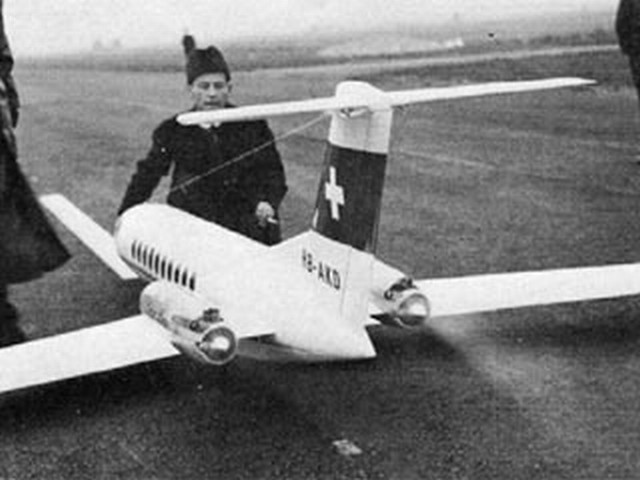