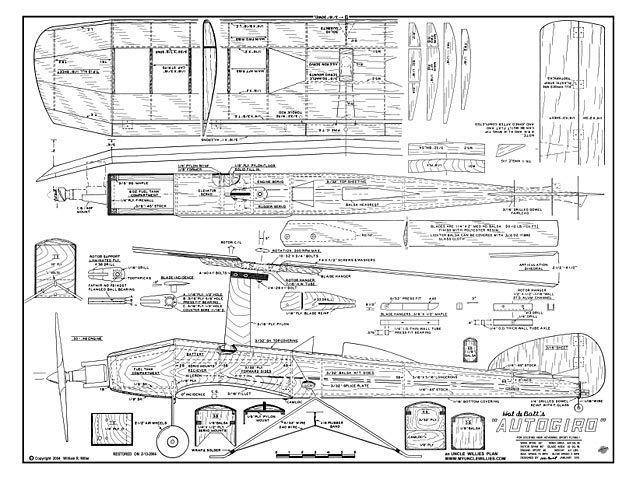 Autogiro. Radio control sport autogiro model. For .40 power. Rotor diameter is 46 in. Wing span is 48 in.

Note throughout this 1977 printed article "Cierva" is incorrectly spelled as "Civera".

Quote: "Famous 'old-timer' took time out to explore the mysteries of rotating wings and used one of his original designs to develop this fine flying Autogiro. By Hal DeBolt.

The Autogiro dates back to the early 30s and it is one of the few 'funny type' airplanes of that period which became successful. Today we find them only in museums, and very few of them at that, because the helicopter does the Autogiro's work better in most cases and we are affluent enough to afford the 'copters.

The Autogiro was invented by Juan Cierva of Spain and further developed by the Kellett and Pitcairn corporations of the USA. The airplanes of that day were rather underpowered in most cases and the engines not all that reliable, plus 'blind flying' was yet to come. The combination of unreliable engines and tricky weather made aircraft safety something to be desired. Obviously if you had an engine failure or the weather was closing in, your object would he to get on the ground as quickly as possible. This was not always possible without crashing because of the scarcity of flying fields. As a result the major objective for designers of that period was the achieving of greater safety in flight.

Cierva's design parameters for obtaining safety forgot about improving the engines and blind flying technique. Instead, he set about designing an airplane which could land and take off from the smallest of fields, one which did not require an airport from which to operate. Additional requirements were the ability to descend steeply and quickly with a dead engine. After considerable effort and much frustration, Cierva accomplished his purpose very effectively. He gave the world a much safer airplane and one which did aviation a lot of good during the time it took to develop reliable engines and to learn about blind flying.

Being an old-timer I have long had the desire to have an R/C Autogiro, not from the nostalgia. but because I knew enough about them to know that they could easily add a whole new dimension to our R/C flying. Consider these factors if you will: An Autogiro flies and controls exactly the same as an airplane; any R/C airplane pilot can fly one without special training. In the air it duplicates the flight of an airplane, so we have an airplane with some very different and desirable flying characteristics. A 'Giro will take off in less than 1/4 the distance required for an airplane. It will ascend vertically on takeoff if desired. In flight it will attain normal aircraft flying speeds and is very maneuverable. When desired it will also fly at near-zero forward speed. With a dead engine it will descend very steeply and slowly.

Landings can be made a la airplane but with practically no roll-out by comparision, or the landing approach can be set up for a nearly vertical descent with no roll-out. Hovering flight is obviously one of its assets: it will easily stay in one spot in the air for as long as desired. An Autogiro does require a bit of forward motion or an airflow of another sort to maintain flight. Thus it is obvious that any breeze is an asset to its flight; the whole performance becomes ultimate when some wind is present. When you add this performance to our normal sport flying, it becomes obvious that you have an entirely new way of flying that is not only advantageous but also considerable fun too!

Over a year ago I decided to do something about my desire for a 'Giro and thus commenced a very long and tedious period of development. When I got into it, I found that due to the passage of time there was very little information on Autogiros readily available. Descriptions could be found but engineering data was practically nil. Thinking that I was a pretty fair aerodynamist I approached the problem using that knowledge and soon found that what I knew was probably excellent for airplanes, but an Autogiro was a entirely different kettle of fish. However, in spite of many problems and crashes which resulted, the search for the answer proved very instructive and the engineering concept turned out to be quite sound and fundamental, once it was understood! Needless to say, the design presented here is the result of these findings, and I have enjoyed hundreds of successful flights with it..." 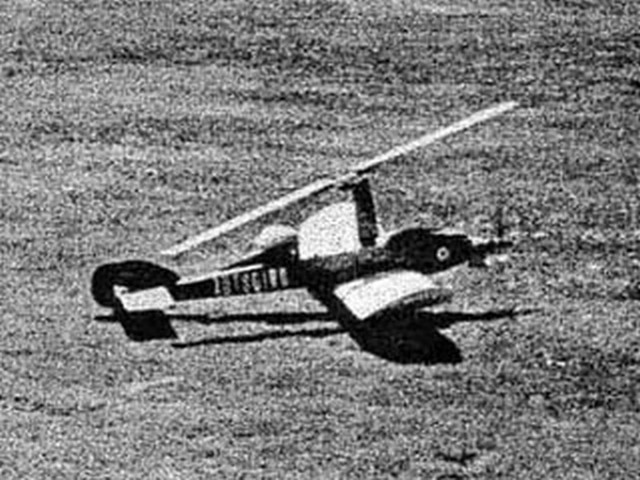