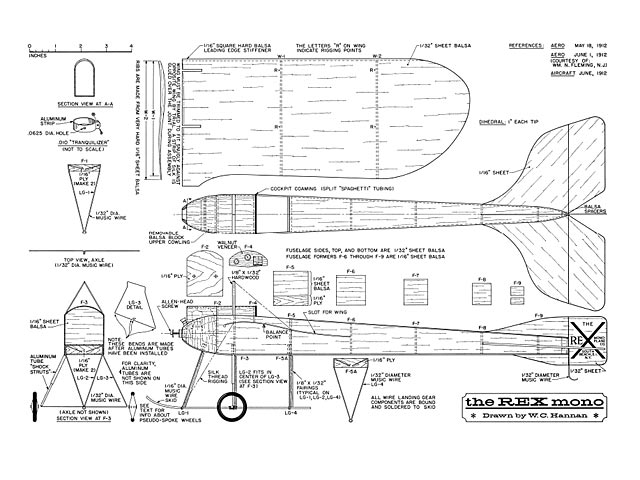 Quote: "Have you forgotten how to build a 'model airplane'? For a change of pace and escape from multi-bombs and logs on wires, this charming little free-flight with thrust-limited .010 is a slow, relaxing flier. It survives all those mishaps too!

During May of 1912, an aeronautical exposition was held at the Grand Central Palace in New York. While this sort of show was fairly common in Europe, the New York show represented the first major US attempt to assemble the products of a large number of airplane manufacturers for public viewing.

One of the most interesting machines on display, was the Rex 'Gordon Bennett Racer.' Its clean lines and progressive features made an immediate hit with the visitors. To fully appreciate the advanced design of the Rex, it should be recalled that the 1912 Wright Brothers' Biplane, which was also in the show, had a general appearance quite similar to their 1903 'Flyer.' The Rex, therefore, reflected rather radical thinking for the era.

Among its noteworthy features was a streamlined fuselage with complete en-gine cowling (remember that most machines of the period still had their powerplants 'out in the breeze'). The Nieuport -type of landing gear was equipped with telescopic shock ab-sorbers in addition to rubber-cord suspension. The wing was notable for its highly reflexed airfoil, used to minimize center-of-pressure travel, thereby re-ducing stalling tendencies. According to theory, this principle works well, but reduces the overall efficiency of the wing. In planform, the wing appears rather unusual today, because of the wide chord near the wing tips. This was intended to improve lateral control, by making the wing-warping more effective (same effect as larger ailerons).

Although the Rex was meant to be a contender in the Gordon Bennett Race, it never made the line-up, and its even-tual fate is unknown to the author. The Model: Most avid scale modelers have a huge backlog of aircraft that they plan to build 'some day.' Unfortunately, really scale 'Nats-type' models take months to build, and it is often difficult to stay interested in a given subject for that length of time. In addition, structural information is not always available for some otherwise highly appealing airplanes.

The all-sheet approach to scale model-ing enables one to retain scale outlines, without the tedium of constructing complex, time-consuming internal framework, and offers a refreshing change-of-pace from the super-detail projects. It is surprising how pleasing even a relatively simple model can be made to appear, by paying proper attention to the execution of external details. Put a little fun in your scale modeling, try an all-sheet!

Fuselage: The bulkheads are made from fairly hard 1/16 sheet balsa, with the
exception of the firewall..." 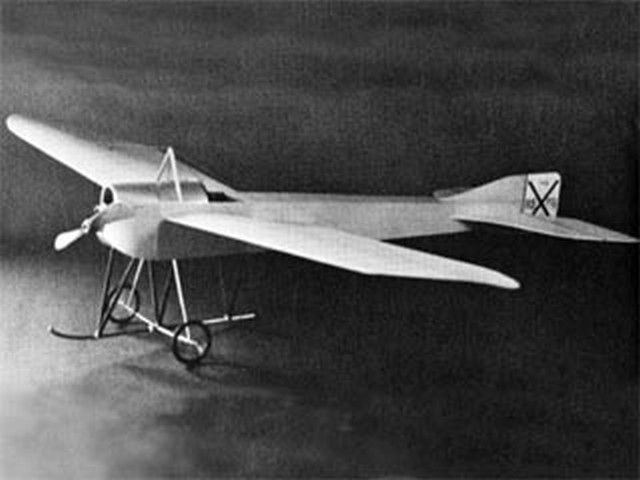