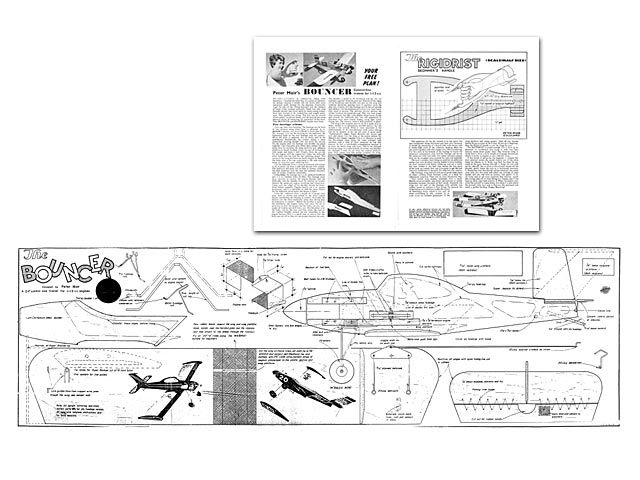 Quote: "My first attempts at control-line flying were disastrous. I learned the hard way, in a series of spectacular prangs, because I simply did not know that wrist movement spells disaster for the beginner. Eventually, I got the idea of this "flying business" and the memory of those initial mishaps gradually faded, but they were brought sharply into focus again by some young schoolboys who wanted to fly control-line and sought assistance. They needed two things: The first was an aircraft that simply would not break. The second was some physical means of restricting the movement of the wrist. Thus BOUNCER and RIGIDRIST handle were born. "

G'day Steve, Mate attached are ...plans for OZ: Bouncer C/L ...I haven't seen any of these plans anywhere on the net and believe that they should be saved in OZ. The Bouncer is a fantastic little trainer that many of us learnt to fly on. Can I take this opportunity to thank Mr John Campbell for giving me the plans to pass into you and the late Mr Peter Gilmore from Townsville Qld Australia who was the motivator behind some of us getting into this hobby. I'm hoping that these attachments will stimulate someones memory that may have better copies for the site. Cheers for now and all the best, Clive 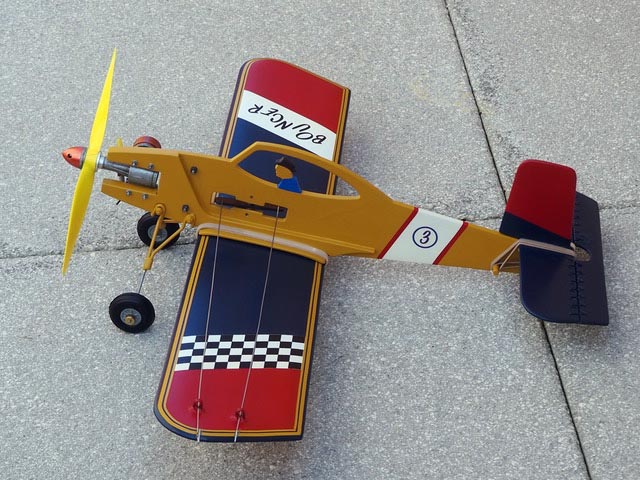 While in high school my friend Graham Peck built this from plans supplied in Aeromodeller powered by a OS Pet a great trainer. Years later I was present when another high school friend ( David Simons) started to teach his son to fly. Year pass and Davids' son (Hugh) sets a world record for junior speed, then in later years wins a class in the world championships in team race. Recorded for history 's sake.
Victor Pember - 22/05/2021
Hi Mary, Here’s the second trainer I’ve built [main pic, 003] to help in my quest for control line excellence. I just couldn’t resist putting this one together after seeing Percy the Pilot in the plan, complete with pork pie hat. The engine is a D-C Sabre, but I may change it as the non-reversible needle valve assembly isn’t ideally suited to a sidewinder. Kind regards,
Robin Lewis - 14/06/2021
Add a comment