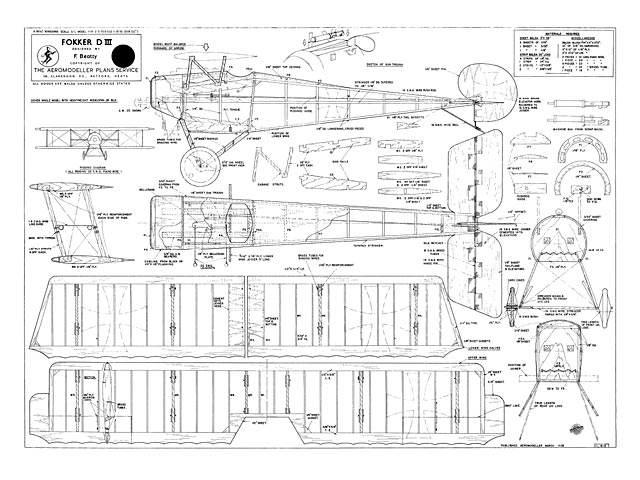 RARE, INDEED, is the model builder who hasn't built a World War I scale model; these veteran aircraft have always fascinated aeromodellers. More often than not, however, their performance does not match their pleasing appearance as the short noses and long tails typical of most World War I aircraft make them very difficult to balance for control-line. Such a type is the Fokker D III - a real challenge to the designer.

At the outset, it was decided that this model's overall weight must be light enough so that sufficient ballast could be used in the nose without taxing the model's flying ability, and particularly that the tail end of the model be light as possible to minimize the amount of ballast required. The end product became an 18 ounce model which requires about 2} ounces of ballast. Using an American K&B 19 with an 8 x 4 prop, she flies fairly fast with no perceptible pitching or yawing, and is capable of the less strenuous stunts. Alternative diesels range from the 2.5 ED Racer, Elfins, AM 25 etc, to the latest DEC Manxman.

Build the tailplane, elevators and rudder from lightweight 1/8 sheet balsa. Sand to shape, gouge out the elevators and cement the horn in place. Dope silk around the 3/32 tubing, run the 11 swg wire axle through and crimp the end tubes to retain it in place.

Make up the fuselage sides, using the plywood side rails, tail gussets and in. square balsa strips. Cement bulkheads F.3 and F.5 between the two sides. When dry add the motor mounts and the crosspieces aft of station 4. Bend up the 16 swg wire landing gear struts and sew them to the bulk-heads. Bend and solder the 16 swg wire spreader bar in place at the axles. After the bellcrank plate, pushrod guide and tailplane assembly are cemented in place, the entire bellcrank assembly can be in-stalled. The fuel tank should be installed just aft of F.3 bulkhead beneath the motor mounts. Formers 4, 5a and 7, the gun trough and plywood cabin struts and lower wing joiner can now be added.

Apply the various sheet coverings to the top, sides and bottom of the fuselage. Add the hollow cowling block with nose formers and fair in the landing gear.

Sew the 16 swg wire tailskid to plywood bulk-head No.10 and cement the bulkhead in place. Insert the upright skid strut into the drilled hole in the tailplane. Bind and solder the skid assembly..."

"Hi Steve, I finally got a decent scan of the drawing, included is the article from the March 1956 magazine that one of the guys at RCGroups found for me."

Article pages, text and pics, thanks to HarryD. 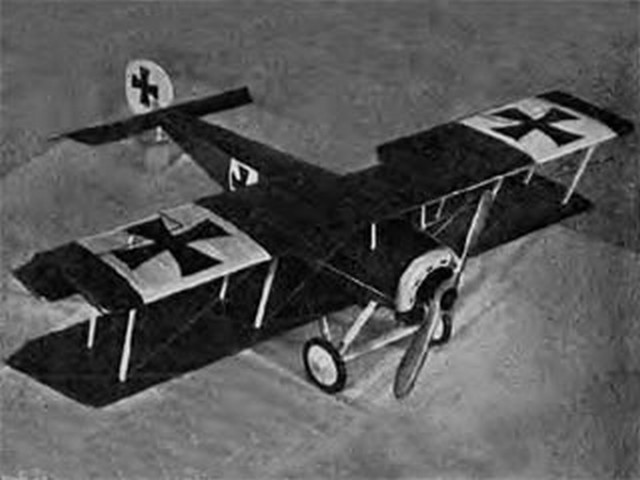