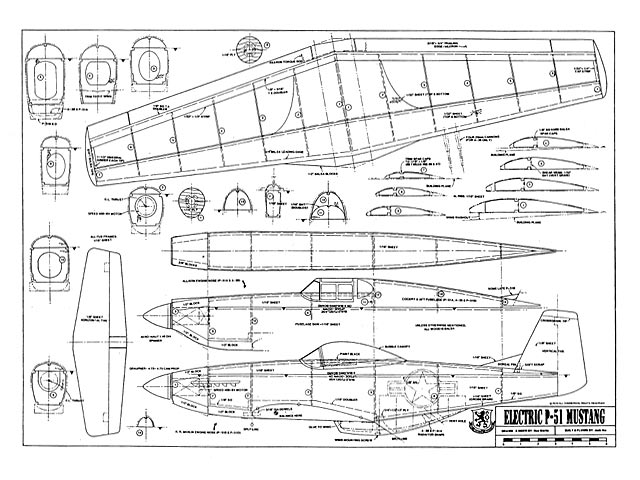 The story of the P-51 Mustang has been told a good many times already and this article could add nothing new. Suffice it to say that this was the Allied fighter which was finally able to successfully escort and defend our bombers against the German interceptors, on the long road to their targets and back.

The name 'Apache' was given to the earliest airplanes, but this quickly gave way to the now famous '"Mustang.' The earliest model was the A-36 and it was to be a ground attack airplane. The P-51A was really the same airplane, except that it was optimized for the fighter role, and the most prominent differences were the change in armament and the deletion of the wing mounted dive brakes.

In service, it quickly became apparent that its Allison engine was rated for medium altitude performance and that Allison-engined airplanes could not operate effectively at much over 16,000 ft altitude. The same thing happened to the Bell P-39 Airacobra. But the Lockheed P-38 Lightning escaped this problem because its Allison engines were turbo supercharged. The rules of war had changed and altitude capability in the 25,000 ft. range was now required.

The Allison engine could not be adapted for this new altitude environment, but the British Rolls-Royce Merlin engine could. And it was agreed that these engines would be built in the U.S. by the Packard motor car company. These airplanes were identified as P-51 Bs. This change altered its thrust line and its nose contours. In addition, the belly radiator also had to be enlarged and revised to match the requirements of the Merlin engine.

These changes improved the P-51B's altitude performance and now its range was unmatched as an escort fighter. The P-51B was now a significant player in the war.

The next change was to develop the Mustang to its final, classic shape. A bubble canopy was fitted in order to improve its all around vision, and the designation was now P-51D.

The plan gives the details required to make any of these versions. My partner in this project is Jack Hix, who also did the photography. Our model used a direct drive Speed 400 motor and seven KR600AE batteries. After doing a lot of flight testing and having a lot of fun with his Mustang, Jack then tried the more powerful Astro Flight 020 motor, but this proved to be just too much power for this model.

Jack first used aileron and elevator control only, and he was very pleased with the Mustang's handling. But then he added the rudder and the model was even more fun to fly. So, you choose the set-up that you prefer to use.

Construction. This is a small model, so be weight alert, and select quality wood for your construction. Also, prior to beginning construction, cover the plans with waxed paper or plastic wrap to prevent the glue sticking the parts to the plans.

Wing: Note that all four versions of this airplane have the same basic wing, but only the A-36 Apache's wing has the four 20mm cannon armament. Locate lower sheeting, lower spar cap, lower 1/32 x 1/2 trailing edge strip, the lower 1/32 x 1/4 capstrips, and glue in place. Taper, chamfer and glue in place the leading edge and the trailing edge doubler as required. Locate the wing ribs as shown on the plans and angle rib #1 per the dihedral template, then glue in place..." 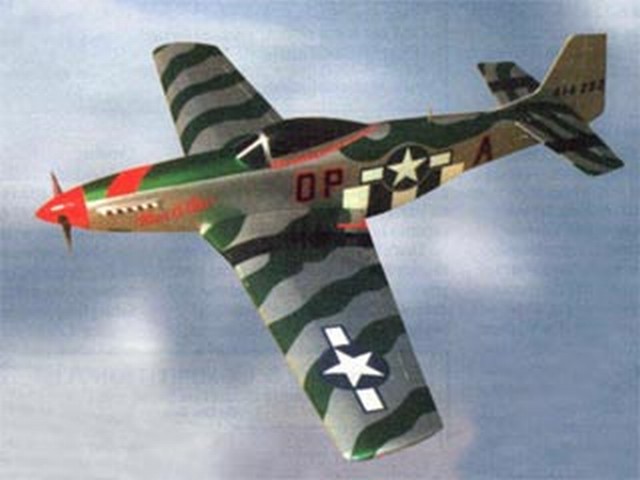