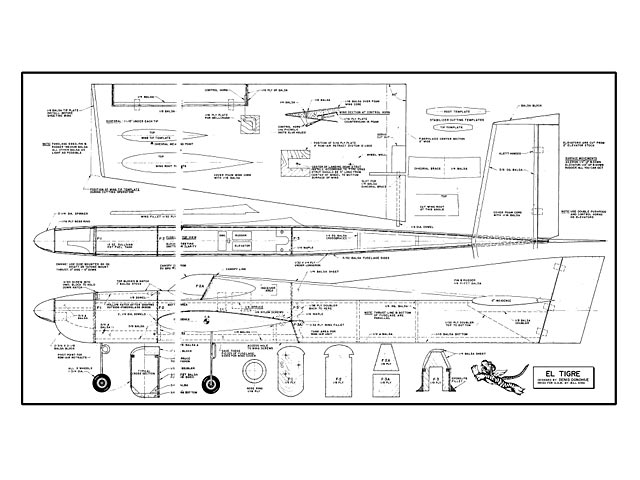 Quote: "It's not often that pattern designs break with tradition. When they do, new ideas lead to some startling looks. El Tigre, by Dennis Donohue.

The idea for El Tigre started to take shape in my mind in the fall of 1970, spurred by the fact that (for the first time in my ten years of RC flying) I finally had a good, reliable proportional set I now wanted a good competition airplane that would do the pattern better than anything available, and that I could call original.

I decided that I would use tried and proven moments and airfoils, so that I couldn't go too far wrong. El Tigre's airfoil is basically a modified Kirkland (Triton) airfoil, which combines good penetration and speed with the stability advantages of a constant radius leading edge. From here, I departed from common methods and decided to add some of my own aerodynamic ideas, most of which came from the 'sounds good' school of engineering.

It is apparent, when looking at our present pattern, that a clean rolling airplane is a must, as almost half of the pattern requires axial movement. So my first set of criteria dictated that I try to get the lateral area evenly distributed above and below the roll axis (longitudinal center of wing). Ideally, this would mean a mid-wing configuration, but I don't care for the look or the hatch problems of this arrangement. I selected a compromise semi-mid-wing configuration.

To this, I added the unusual looking tail, which was a conglomeration of some pet theories. Since an effective rudder is a must with our pattern, and rudder area below the stab is more effective than above, this arrangement now placed half the rudder area below the stab. This setup gives me no roll effect when rudder is applied, and makes it very effective for spins, stall turns, etc. I also reasoned that, with equal lateral area above and below the horizontal stabilizer, it would give me a very axial roll, with no tendency to porpoise, as often happens with high vertical fins. As an added bonus I felt that it would tend to eliminate the effect of propwash on the yaw axis during the takeoff run.

My next effort was toward aerodynamic cleanliness and speed, which I felt was an asset to our pattern by decreasing the effect of wind on the flight path of the ship. Therefore, I built the fuselage just wide enough to house all the necessary equipment, with no wasted space. Although it is wide enough to house all presently manufactured equip-ment, the fuselage is only 2-3/4 in at the widest point..." 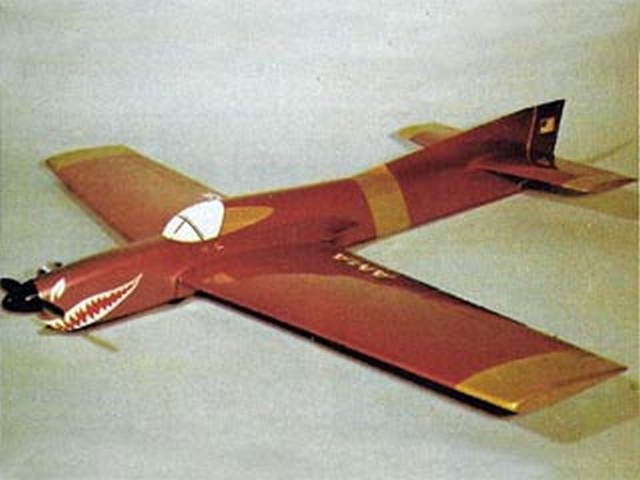