Quote: "In the 1920s, Cierva of Spain felt a safer aircraft (for that time) was possible. He labeled his conception 'Autogiro' and his development effort proved frustrating. He finally found the necessities and had success.

Over two years ago, our 20 year hiatus from autogiros ended when we found others interested and enjoying working with them, so it seemed time to return. My thought being to advance from the '77 effort; Giro V represents the result.

Every project effort should have an objective. I have always felt the result of anything done should be attractive and usable by the average modeler. Thus, my goals for the new Giro venture were established.

First, control should include 'Tilt Rotor', then the Giro should be as easy to use and fly as the modeler's pet airplane. Also, it should be as flyable in any tolerable weather as his airplane is. Plus, as a miniature, it should be easily capable of duplicating full-scale performance in its entirety.

Always striving for the goals, we encountered one mystery after another, and it soon became apparent that the desired craft saw far stronger forces than other modelers had seen. However, persistence can pay off, and finally the 5th version proved to be more than hoped for. Giro V is a fine performer which most RC'ers would appreciate having in their stable.

As development progressed, we reported our findings in RCM 11/97 to 8/98 and, for those interested, it would be worthwhile to review those reports, as they are in detail.

The Giro itself is different from an airplane with its rotating wing and lots of clever gimmicks. It is not a speed craft; top speed of Giro V being in the 50 to 60 mph range. The difference is the low-speed performance where some maneuvers are accomplished at no forward speed!

Let's see if a potential flight might tickle your fancy. Begin with a take-off in a few feet directly into the wind, climb steeply to some altitude and do a 180° turn into a full speed pass at altitude. Do another 180° turn into the wind, reduce power and enter a 'stand still' hover. From the hover, cut to idle speed and perform a vertical descent. When close to the ground, add a bit of power to stop descent and continue with a slow fly-by at walking speed; during the fly-by, drop in for a touch and go,
then go to full power and use a pylon style turn into a full speed fly-by; then, at the end, pull into a near vertical climb. At altitude, rudder into a wing over, reducing power on the downward leg; then, on recovery, make another pass to a near vertical climb to altitude. Up there, display some more hovers and vertical descents, have fun! While at altitude, position your Giro for a chosen landing spot and enter a hover, then a vertical descent to the spot; at last instant, stop descent with a bit of power, allowing the Giro to drop into a no roll landing, grin and taxi back to pits. Impressive? Surely different and exciting!

This experience can be yours with no more than a normal effort and at little expense! The Giro V features should be understood, so let's commence at the forward end: 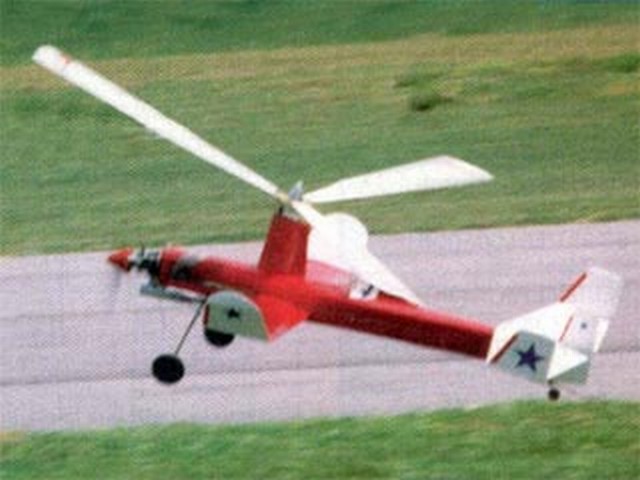