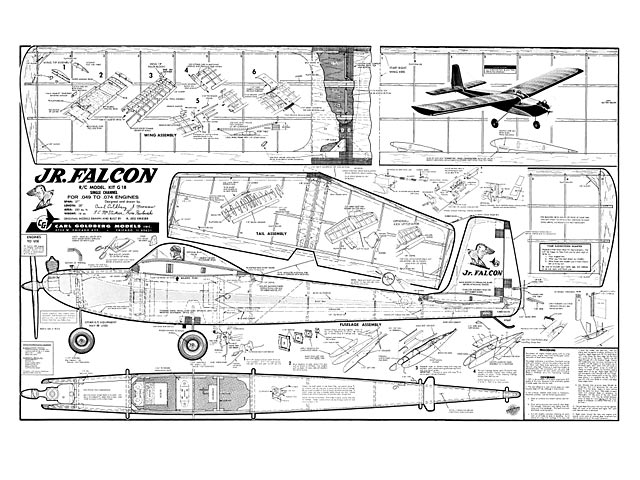 Note this here is the original version of the Jr Falcon plan, from Carl Goldberg. For an alternate modern redrawn plan in PDFvector format, (features I-beam wing spar, and some minor differences) see Jr Falcon (oz2191).

Quote: "Knowing a good thing when he has one, Goldberg scaled his Falcon down to smaller size. Appearance, design and construction features are so much like the 56in plane you would have difficulty telling them apart in the air - except for the noise. Junior is intended especially for any .049 engine ...which gives lots of leeway. The fuselage sides have same W-joint in the center, the same doublers fore and aft, the same keyed formers, top and bottom. Wings are made the same way, with Symmet-True methods to assure easy and accurate assembly. Intended basically for Rudder operation, the Jr. Falcon may be flown with kick-up elevator and plans show where to cut the stab for this addition. Despite modest size, there is lots of fuselage space for radio gear, both under wing and in the nose compartment. Designer Goldberg feels Junior is ideal for the 'package' radio units, depicts the Citizen-Ship R/C Pak in one sketch. Another suggested and illustrated installation is C & S Finch receiver with Septalette Mark V actuator, for proportional rudder." 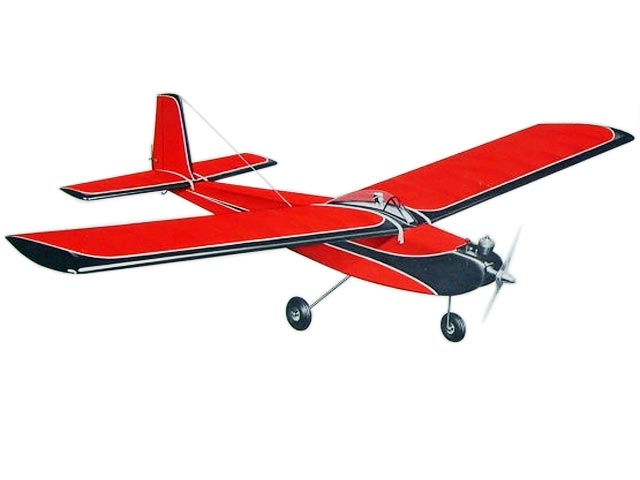 Hi Steve, Here is a picture of my Carl Goldberg Jr Falcon I have just completed [more pics 003]. I used the original plan from Outerzone. Regards,
PaulBizard - 20/03/2017
Add a comment