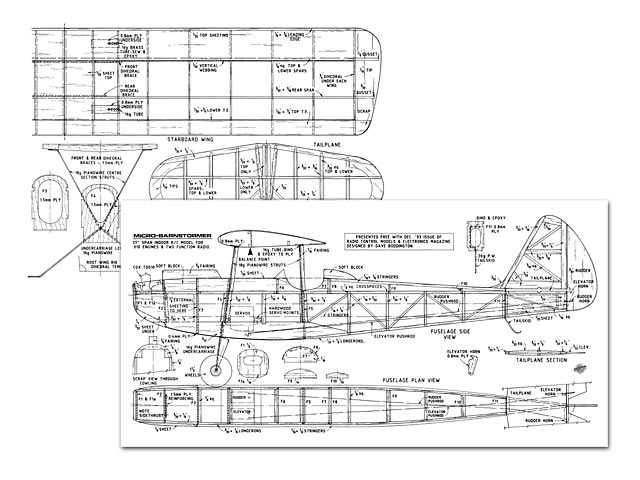 The announcement that indoor flying at the Model Engineer Exhibition is extended to small powered R/C models is really great news. At the last MEE the flying was restricted to the Handley Page Trophy entrants and a maximum of .010 capacity engines. Although I built a model of a Handley Page aircraft, I thought it would be prudent to also experiment with a 'known layout' model to get an idea of flying limitations and techniques - hence the Micro-Barnstormer.

Having seen Barnstormer models from 36 to 120 inch wingspans fly with very similar flying characteristics, I thought it would be reasonable to expect an even smaller example to behave in a similar manner. 29 in wing span was chosen as being the maximum size for the tiny, but potent Cox TD 010 engine. Keeping it reasonably large, the airframe sensibly light, and the radio to the minimum weight possible with commercial equipment would give a model with a sensible wing loading and moderate flying speed. No fantastic efforts were made to keep the model ultra light; it had to be reasonably rugged and be capable of flying outdoors on a calm day.

Proof that the strength/weight ratio is about right has been confirmed on two occasions. The first flight in Olympia resulted in collision with one of the cast iron roof frames, with only a dent in the cowling as a result. Flying the Micro Barnstormer at the ASP Small Models day, I launched the model only to hear an ominous click as the model left the hand. I had fitted a small toggle switch on the side and caught it as the model was propelled forward. Although quite well trimmed, the increasing left hand spiral eventually culminated in the left wing tip and ground meeting; all that was hurt was the strut fixings on the wing and my pride!

For outdoor flying I would suggest a Cox Pee Wee 020 (glow or dieselised version) and this would also be suitable for indoor flying carry out test flights with the propeller on backwards. The only change I have made from the prototype model is to increase the dihedral slightly to improve stability and turning ability.

Fleet Control Systems and Hitec (on 35 MHz) produce radio equipment suitable for indoor models. You can dispense with a switch by using a miniature jack plug socket wired into the power lead. The plug is removed for switching on and the same socket is used for charging. Rechargeable nicad batteries should be 50 mAh or larger.

Select your balsawood sensibly; you will probably have enough in the scrapbox for this little aeroplane. Cutting your own strip wood makes sense as you can be sure of having equal strength lengths from the same sheet.

Construction of the airframe is strictly conventional and is the larger Barnstormer in miniature. Check on the drawing for location of the engine and radio equipment. If you are using a four fixing point engine, modify the reinforcement to F2 accordingly. The plan is drawn so that you can cut out the rear of the fuselage, fin and rudder and fix it to the remainder of the fuselage drawing without destroying any parts on the reverse side. You may wish to take photocopies of the drawing and work from these; they are A3 size sheets.

Fuselage construction follows the two fuselage frames being made and joined with the formers and crosspieces. Note: Centre section struts and the undercarriage wire and tailskid should be sewn and epoxied to the formers before joining the sides. Whether you choose to have the radio equipment accessible is up to you, suitable hatches will have to be provided if you want it removable, mine was built-in. My model required about 3 degrees right sidethrust; this was obtained by fitting washers under the left side of the engine tank. You could angle F2 to include the sidethrust offset.

Wing panels are constructed over the plan, either trace for the full port wing or obtain a reverse print. Pin down the lower front and rear spar and 1/32 trailing edge. Glue on the ribs and add the leading edge, top spar and trailing edge, followed by the leading edge sheeting - all very conventional. Remember to angle the root ribs for dihedral..." 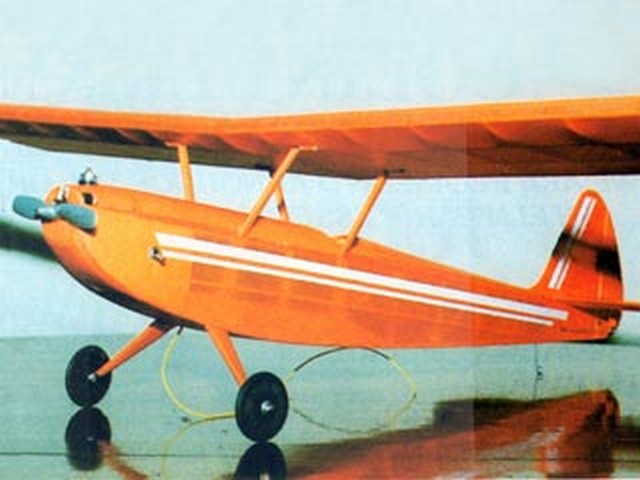