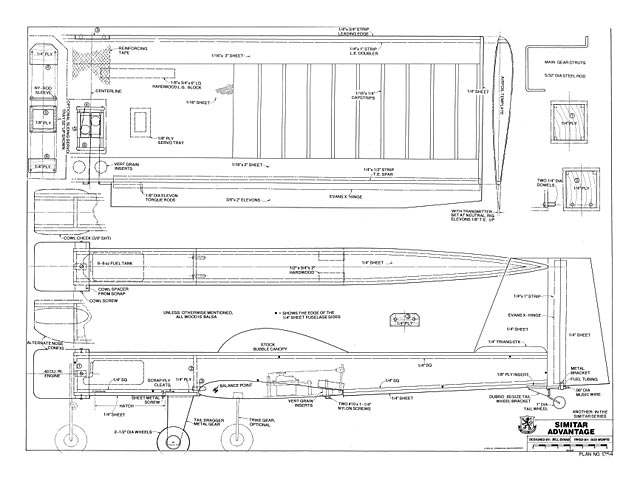 Many times my ideas for a particular design come from talking with my Simitar (oz10187) flying buddies. Sometimes, comments by non Similar pilots have an influence; these are mostly related to 'scale-like' airplanes. Such conversations prompted me to build a 60-size fun-scale version of a Cap 21 (with elevons instead of horizontal stab and elevator). As I expected, the ship flew great doing all the things thai one wiih an elevator and stab can do plus the performance advantages of no tip stall, directional stability, and smoother operation over a wider speed range.

However, as a rule, I try to leave the designing of scale models of full-size airplanes to the many experts already in the hobby. Instead, my designs are intended to be reminiscent of full-scale ships while retaining the advantage of performance and simpler construction. This philosophy, with the help of my friends, led to the Simitar Advantage.

During a 'hangar flying' session in my shop one day a friend, Bob Stern, was talking about making cowlings from plastic soda bottles. This led to a discussion of shapes with the conclusion that the simplest would be a round radial engine cowl like the Corsair. Further brainstorming resulted in a low-wing taildragger that is not a scale of any particular plane. Instead, it reminds one of several 1930s ships like the Hughes Racer, Wedell Williams, and Brown Racers

Within a few days, I finished the prototype using a 2-ply soda bottle cowl, painted with silver spray-can epoxy, a 60-size, constant chord, ply-sheeted wing of 50 in span, a K&B 40 R/C engine, a windshield and simulated open cockpit. The entire construction, covering, and equipment installation process took less than 12 hours excluding time out for other activities like 'Honey do' chores.

Now comes the moment of truth: the test flight. Take-off was routine for a taildragger, a little down elevator at the start to let the plane gather speed, then ease back on the stick and up we go. Climb to altitude a couple of mistakes safe, then loops, rolls, split S's. Cuban eights, inverted flight, and a very gentle 3-point landing. As expected, the ship behaed well over a wide-speed range.

Within a week of completing ray test flight, another friend. Bob Akin, finished his Advantage with a 64 in tapered 60-size, partially-sheeted Simitar wing, a gold-painted 2-ply soda bottle cowl, a K&B 40 R/C engine, windshield and simulated open cockpit with pilot's headrest. This version also had excellent performance with a slower, gentler roll rate because of the longer w ingspan.

Within a couple more weeks, two more Advantages were completed by Bob Stern and Al Nye with the ply-sheeted, constant chord, 60-size wing of 50 in span but powered by K&B 61 R/C engines. Again, performance was typical Simitar..." 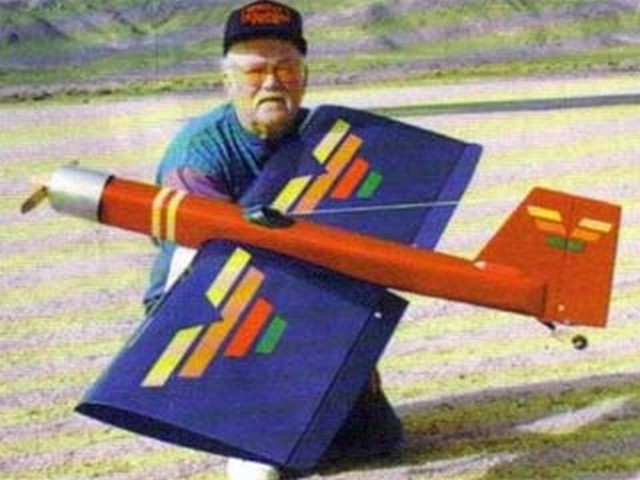