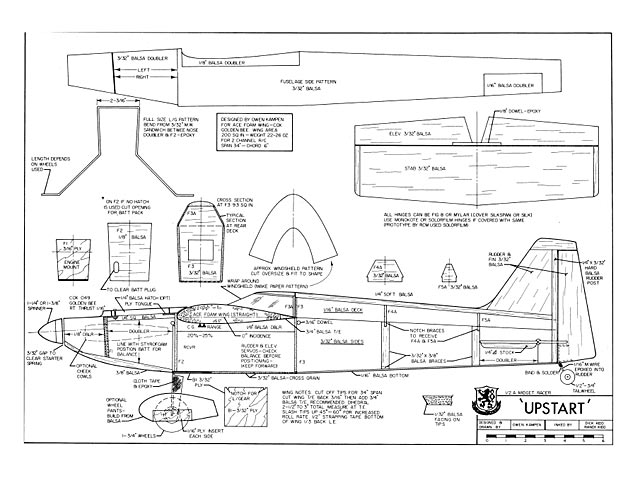 In the few short weeks following the original proposal for a 1/2A Midget Racing Event, the response has been overwhelming. Preliminary drawings of the Upstart were sent to modelers in various parts of the country and in almost every case the response was one of immediate and enthusiastic support. This was remarkable in view of the lack of response given to earlier attempts by RCM and the author suggesting a similar event - Hoosier Hotshot (oz8520) in RCM 4-67 and Bonzo (oz9298) in RCM 8-67. But in retrospect, the timing was premature and as a result it literally never got off the ground.

For four years, however, the rightness of the concept of an .049 racing event lingered on and was nourished by continuous discussions with Frank Baker, who got tired of trying to fly one man races which he always won and lost by coming in first and last simultaneously!

In the meantime, the hobby was undergoing rapid growth and change. Reliability went up as prices went down and the flying competence of the average modeler rose to new highs. With the recent introduction of new lightweight two-channel digital equipment, priced below our wildest dreams of a few years ago, the time at last seemed right.

What was needed was a new design to take advantage of the current state-of-the art, and so the Upstart was born. While owing its parentage to the earlier designs, this youngster comes on strong - being smaller, lighter, faster and quicker to put together.

Without getting deeply involved in design philosophy, a few observations can be made regarding some depar-tures from general practice. Five degrees of downthrust is indicated and the reasoning for this is based on past experience with models not utilizing ailerons. In this special case it has been found to be desirable to have about 50% of the rudder area below the thrust line to increase the rate of roll. It was felt that this advantage in the turns would more than compensate for a minor loss of thrust. In any event, this is a builder's option and if you believe a 0,0,0° setup is best, go with it. Let's prove out our beliefs on the race course, for this is what it's all about.

The shoulder wing configuration was chosen for ease of hand launching and the inherent stability necessary in a small fast plane. The Ace foam wing has been proven in a half dozen designs to date and offers the obvious advantages of fast building, fast field repairs and excellent flight characteris-tics at high and low speeds. The latter is a must if we are to achieve optimum lift in the power off glide on approach and landing. (This must be seen to be believed even at up to 18 ounce wing loadings tested.) This is a direct result of airfoil thickness and should not be sacrificed on the altar of speed. The built up balsa option is available for those of you willing to put in some extra hours. It has also been tested and works equally well. The choice is yours.

As the weather in these parts has been hovering around the zero mark and over 20 inches of snow lie round and about, a minimum of flying as been done. Therefore Don Dewey will report in greater detail on his findings in a fairer climate.

It should be emphasized that for those of you who have digital rigs with medium size servos, you are still in the game. My MRC outfit, which falls in this class, weighs in at just about 8 ounces using two servos and 225 mah batteries. Those possessing the ultra small airborne packs can do even better. Two of the 1/2A models tested weighed in at 26 ounces and perform-ed beautifully so there is a considerable amount of leeway.

At the time of writing over 40 models are under construction from coast to coast so let's get on with a brief building bit so that you too can get off the bench and become part of the action.

No attempt will be made to give you a joint-by-joint account as the basic construction is about the same as all other basic constructions. A few points are worth mentioning, however, to speed up the operation. My own method of transferring plans to balsa is the pin prick method using a straight edge and french curve to connect the dots on the wood. If nothing else - it saves the plans. The next suggestion is to use the cut-out pieces as patterns for the second model. Surely you're not going to settle for just one?

Choose your wood wisely for many of you will be using 225 mah battery packs to reduce weight and tail heaviness is sudden death to a small fast one. Incidentally - for those of you using 2 servos from your 4 chan-nel rig, the smaller batteries will give you plenty of air time because half the number of servos coupled with extremely light flying surface loads greatly reduce battery drain.

Epoxy is heartily recommended around the motor end as well as for the landing gear. Titebond is great for the rest. Silkspan over all balsa parts greatly reduces the time to fill the grain and really helps reduce splitting. Another option will be mentioned when we get to the foam wing which appears to be now.

Rather complete instructions come with the $2.95 Ace foam wings but a quick review may be helpful. An X-Acto razor saw works very nicely for cutting off the slash tips. Be sure the chord line is at right angles to the leading and trailing edges. Then use a steel straight edge to cut back the trailing edge of each section about 3/16 and use Titebond to attach the TE stock. A couple of rubber bands will hold it evenly while drying..." 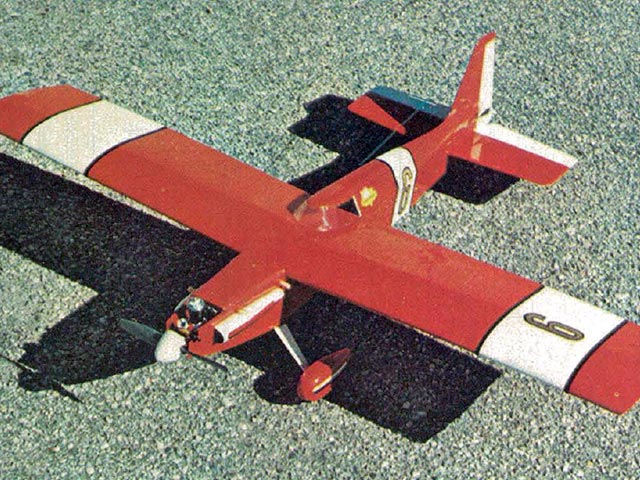 I am just finishing up a kit version of the Upstart II kit that I've had for ages. What a lovely little aircraft! The Upstart II appears to be pretty much the same except for instruction inserts that tell you how to build it with ailerons and less dihedral. I read a review where the flying weight was 25 ounces - I'm not sure how to achieve that without a 500mah battery pack, two large servos, and by dipping it in Hobbypoxy! With light gear and a VA .049 MKII RC I think it will come in at around 13-14 ounces, the bare airframe so far weighs in around 8oz. Based on the fun I had with my last ACE model looking forward to finishing it up! I was very pleased to see the plans here, I intend to play with the design a bit and knock out some of the extra weight further, I see this morphing into a neat little fun flyer. Already thinking about the .15 version as well.
Mike D - 26/02/2022
The bare airframe components, complete, weigh in at 7.6oz. At this rate the finished aircraft should easily come in under 14oz, with HS-65HB servos, 3.5g Rx, and LiPO battery/BEC. The performance ought to be fairly rambunctious by comparison to a 24oz example with 8oz of radio. OK now how do I submit a photo LOL? I'll go read the instructions..
Mike D - 27/02/2022
Add a comment