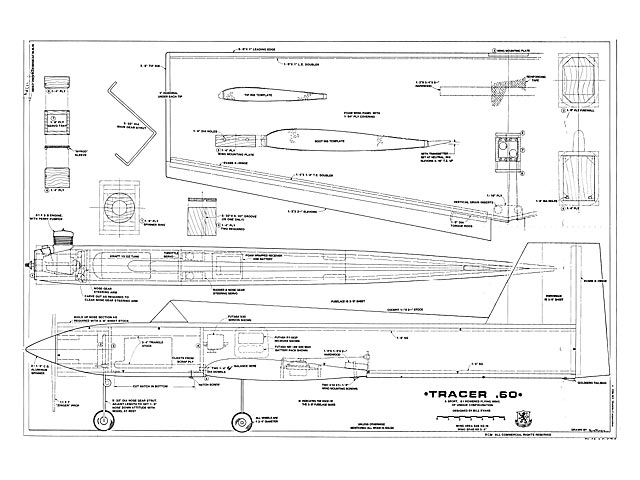 Quote: "The Tracer 40 and 60 add up to 100. Actually, either one of them is a 100 percent pattern ship. After the first glance of the Tracer you may reason that I finally relented and built the Simitar as a conventional aircraft. Well, look again, no stab! No need to worry, it flies great without.

Experience with the many Simitar (oz10187) designs over more than a decade has established a hybrid aircraft with several aerodynamic advantages superior to the more conventional aircraft. First is the no stall advantage - never a snap roll on a premature take-off, or when pulling elevator, while stretching a dead stick landing to reach the field. Next is the wide speed range, from 15 mph to 150+ mph is certainly a plus, excellent control response at all speeds. Now, add total hands-off stability - touch some aileron, and let off, it holds the turn. Touch up elevator, let off, it holds in a climb.

The significance of the Simitar 'Total Performance' had not been fully realized until Bill Winter and I got into the Simitar Slow Motion Project. Guess I had been too close to the forest to see the trees. It's interesting that I'd been flying the design all these years and took all the performance plus features for granted. Winter's comments about how well the ship performed made me realize how good the performance really is.

So, I put the 'Total Performance' advantage of the Similar configuration to work in the design of a pattern ship, result is the Tracer 60. Before I go any further, it's important to name Paul Samaras of Lakewood, Colorado; Ray Holmes, Greenville, Tennessee; Joe Misicka, Hillsdale, Illinois; Larry Smith, El Campo, Texas; Reuben Vargas and Doug Stanek both of Bishop, California. All of the above helped in the development of the Tracer by building and test flying before actual preparation of this construction article. Paul Samaras became so involved that he built the first Quarter Scale size, powered by a Bully, which pulls the 21-1/2 pounder with ease. Paul reported to me that his Super Tracer flies almost the same as his Tracer 60, a bit slower, but still snappy - stalls, loops, snaps, inverted and outsides, all excellent!

Design approach included my basic, slightly reflexed airfoil and the proven swept forward trailing edge wing planform. The Skywalker 60 (oz8133) fuselage was stretched rearward and a generous fin and rudder attached. Due to the length of the fuselage and far forward CG, the rudder moment arm is quite long and produces very good yaw characteristics necessary for pattern maneuvers.

What would be gained by adding 10 to 12 oz of gear works and servo for retracts? Also it could be that the drag created by the open wheel wells is almost equal to the drag with Used gear. The question of retracts was debated and as you can see, the easy way out, fixed gear.

As with my Simitar, the Tracer has control surfaces at the trailing edge of the wing. These surfaces function as elevators (for pitch) and ailerons (for roll). They are elevons, which produce a very smooth delivery of control response..." 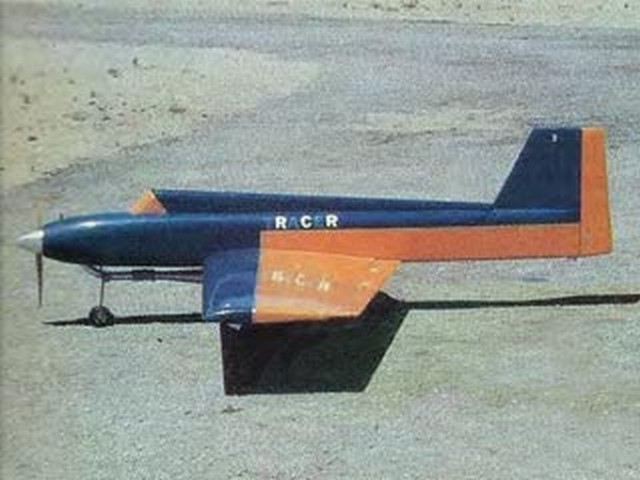