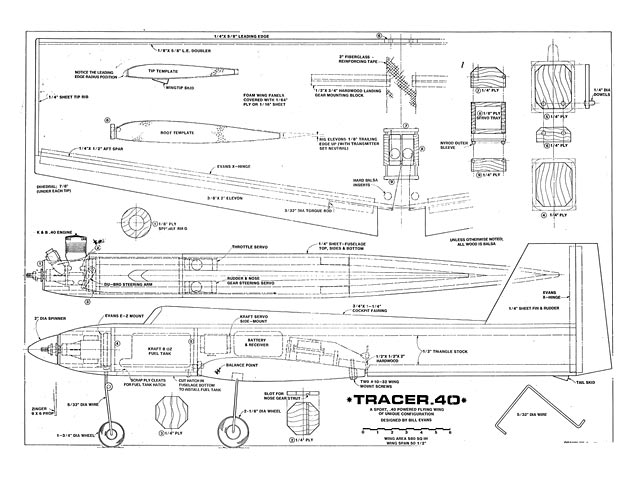 Quote: "The flying wing expert, Bill Evans, has taken his Simitar (oz10187) design and, at first glance, made it look like a conventional aircraft. Look again, no stab. It performs superb without it. Tracer 40 by Bill Evans.

The Tracer 60 was so well-received, that it naturally followed that a Tracer 40 had to come. Though the 40 means like K & B 40, I naturally had to mount a 6.5 in mine and as you would expect at 4-1/2 pounds, the vertical is more than outrageous.

For the Tracer 40 I picked the Futaba 7FGK-FM radio. I should mention that the 7FGK has a V-tail mixer which can be easily converted to an elevon mixer. The best thing to do is contact Futaba and make the necessary arrangements to have your 7FGK changed from V-tail to elevon.

Certainly the absence of a rear mounted horizontal stab is an issue which results in mixed reaction. In fact, one of the more devilish fliers in our neck of the woods set up a Tracer with a fake stab. He fixed it up no the stab released and popped off when full throttle is applied. You can imagine the reaction of the unsuspecting observer when he watches the ship ease down the runway and lose the stab as full power is applied, then take to the air and fly as if nothing had happened.

Construction 1. Glue (aliphatic) and pin the 1/8 leading edges and 1/4 in trailing edges to the foam cores. be sure not to bend or warp the cores. Set aside, in cradles, to dry. 2. Make fuse sides, cut wing saddle. Cut firewall and former. 3. Mark a centerline on the fuse top. Mark position of firewall and former on fuse sides and fuse top. 4. Pin fuse top down on flat surface. Pin and cement (Hot Stuff) triangle stock to fuse top. 5. Glue and pin first fuse side to top, set in firewall and former..." 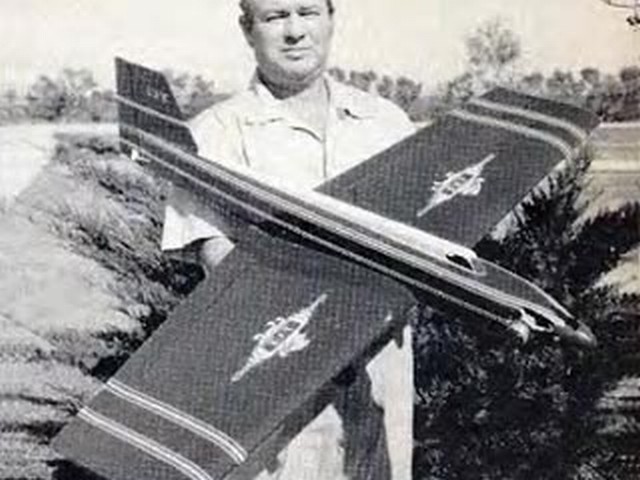