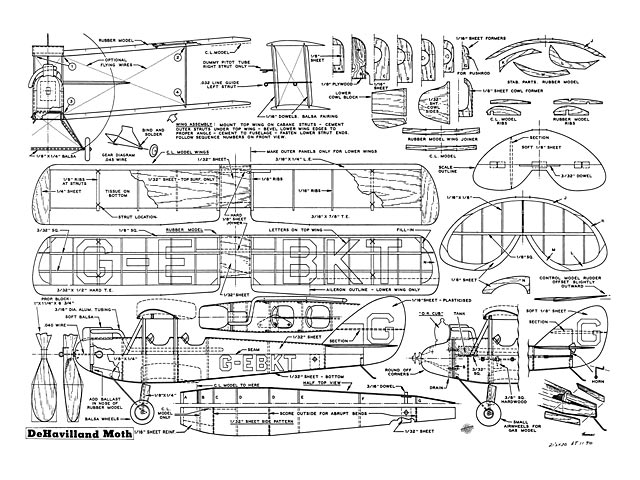 Quote: "Another of those AT 'Specials': a glamorous old gal reappears as a control line beauty or as a rubber-powered free flight. DeHavilland Moth, by Bill Winter.

No private plane ever built had greater claim to lasting fame than the De Havilland Moth. First seeing service in the mid Twenties, this English plane was a leader for nearly a decade. It got in its share of the glamor flights, to Australia, over the Atlantic, but all that merely pointed up why what ordinarily should have been just another lightplane, actually was considered both here and abroad as one of the real greats in the private aircraft field.

As originally designed, the Moth was powered by the 60 hp Cirrus, on which it had a top speed of 90 miles an hour and a minimum speed of 38 miles an hour, a performance almost identical to late 65 hp American monoplanes like the Cub and the Champion. Being a biplane, it was small, spanning only 29 feet - and its wings could be folded. Some 686 pounds were available for the two passengers who rode in its open cockpits, gasoline, oil, and luggage. That's a pretty fine performance, as any present day lightplane owner can tell you. Moreover, the engine was so smooth and so well muffled that pilot and passenger could communicate without a speaking tube.

In appearance, the Moth was a recognizable little brother of the DH-4 and the DH-9 of colorful World War I days. Since most of us don't recall those days, it can be pointed out that the Tiger Moth bipe that trained tens of thousands of airmen in the Second World War bears a striking resemblance to the Moth. Students of airplane histories will recognize in all three machines the typical DH landing gear, vertical tail, and planform shapes. All these things, and the many other distinctive features, like the long exhaust pipe that carried fumes well behind the cockpits, and the thick, center-section gas tank, have been reproduced faithfully in our model. The drawings are accurate enough for competition scale models, having been scaled from a three-view that appeared when the Moth made its first test flights.

The plans present complete information for making either a rubber-powered flying scale model or a U-control job for either the Cub or the Baby Spitfire. Somewhat on the large side for an Infant, the Moth should fly on new engines, smaller than the .045 - .049, which were promised when this was written.

Although the planes are identical in size, all the design factors important to top performance in either version have been considered. Dihedral and tail surface size vary. So do wing construction and other, less important, details. If you are handy with the drawing tools, you maybe interested in making a free flight one - half again this size for the Cub, featuring the rubber-model type construction; or a big-engined control job with its appropriate frame.

Before starting fuselage construction be sure you have located on the plans the details pertinent to the type you select to build. For example, the front end of the fuseklage is altered to take the gas engine, the rubber job having the conventional plug for winding..." 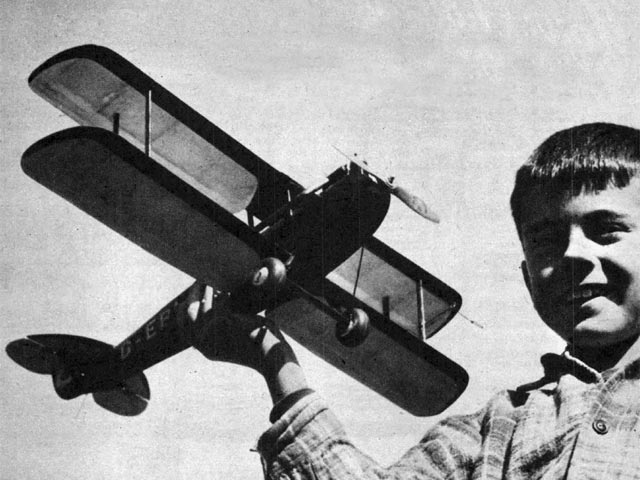