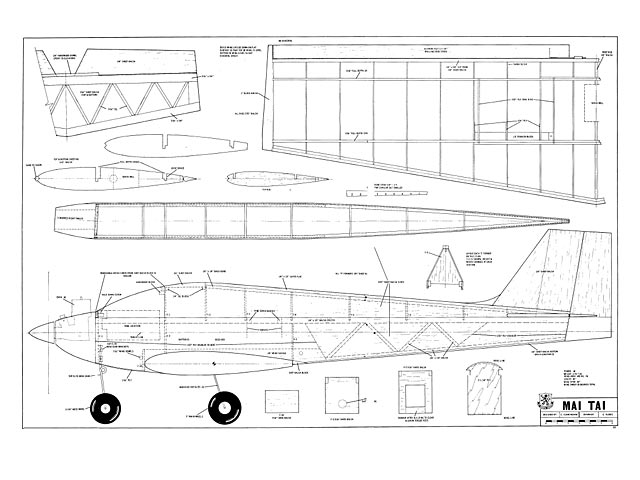 Quote: "The Mai Tai has been designed to fly the AMA pattern as set up under the 1968 rules. This year, a lot of emphasis has been placed on knife edge flight and rudder use. One of the best ways to accomplish this is to design a ship with an abundance of side area, and a large flipper. Actually the Mai Tai is similar in appearance to the models flown by the German team in the 1967 internats. These aircraft have lots of side area, but have a large drawback by American standards; they are too large and too heavy. Most of the 'Super Delphins' sport a maximum of wing area and a weight of 9% pounds to 11 pounds. The Mai Tai carries a wing of 690 square inches total and a weight of 6.5 pounds. The airfoil is a 15% symmetrical and the total sweepback of the wing is twenty degrees. Ample fin and rudder area allow a great deal of control during rudder maneuvers.

The name of the Mai Tai was suggested by Helmer Johnson as being the name of a very potent Polynesian drink - one with a lot of kick, and, an orchid in it. Seemed like a pretty good name at that. Then Dan Carey was flying a slightly modified Mai Tai in the Phoenix contest and one of the judges, who happened to be Chinese, asked Dan if he knew what Mai Tai meant. Dan figured he must have a dirty word painted on the side of his ship, and was all set to settle for a low score when the judge came back with 'Water Chestnut'. So take your pick, a potent drink, or a wet nut.

The Mai Tai can fly knife-edged from horizon to horizon (if you could see that far) and will actually climb in knife-edge flight, very much unlike any of the other current crop of pattern ships that fall through the air in this maneuver. Eight point rolls are a snap. You really don't need to use much rudder here as the large side area keeps the nose up in almost any position. The symmetrical airfoil seems to be better for all-around flying, although a couple of Mai Tai's have been built using a clipped (600 sq inch total area) Taurus (oz612) wing. Another very large plus of the design is the fact that it is extremely stable. Even more so than most shoulder or high wing models. It tracks through maneuvers as though it were on rails. In a stiff wind it is hard to taxi due to the large side area, but the new rules make this a minor problem.

One word on knife-edge flight, before we get into the construction. When flying most pattern ships, knife-edge flight is done by rolling into a 90° bank and then holding rudder to try and keep the nose up. With older style ships this is an almost impossibility. With a more modern ship such as the Kwik-Fli III (oz7431) it can be held, but the ship is falling through the sky rather than flying. Many so-called knife-edge flights are really not rolled to a 90° position but are about 4.5° to 60' with the ground. With the Mai Tai, clue to the large rudder and ample side area. you roll into a 90` position and hold in a little top rudder. You don't need to use all of the rudder throw to hold it. In fact, after you have rolled it on its side and applied top rudder, you will have to hold in a little opposite aileron to keep it from rolling over on rudder. Holding in this aileron will let you fly back and forth across the field in knife-edge. A little down elevator may have to be applied to keep the flight in a straight line..." 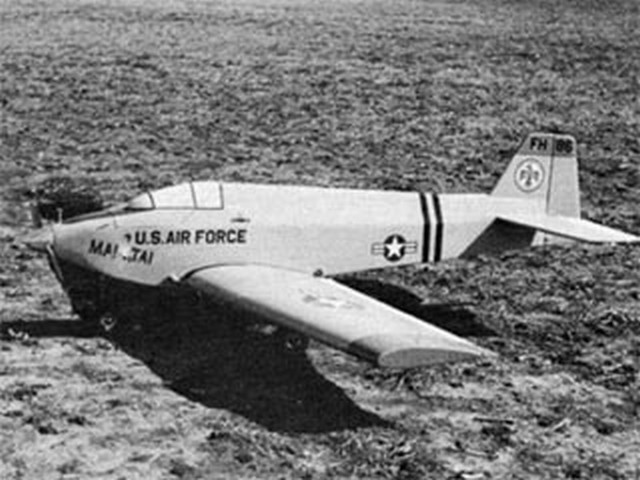