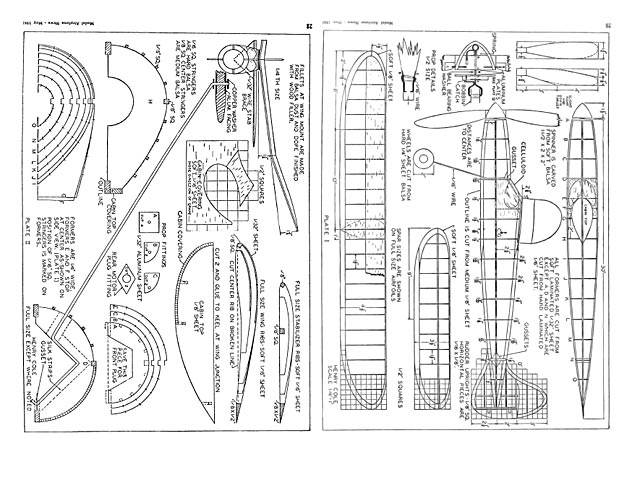 Quote: "This model was designed primarily for attaining high altitudes, and first test flights were entirely up to expectations. However, after just a few flights, the plane flew out sight and was lost. Although it set a new local record of l8 minutes and was followed for 35 minutes. the loss was heartbreaking because it prevented entering the model in contests.

The second test model was improved and changed as experience with the first one directed. Better performance was apparent immediately. Although the large prop turned slowly, the ship climbed at a steep angle and attained altitudes as high as most gas jobs.

The principle behind this climb is simple! The ship was built extremely light and brought up to weight rule with a heavy motor. Many model builders realize the advantages of high power-weight ratio, but few use the extra power efficiently. Therefore we took care to use as much stored energy as possible towards getting altitude. A large prop and streamlined fuselage seemed to be the logical combination. The fuselage was especially designed to give a smooth airflow around the wing and stabilizer as well as prevent burbles over the fuselage during the climb.

The only time the model had a chance to partially show contest ability was at a meet in Tacoma, Washington, though a cold, gusty wind made long flights impossible. In spite of this high wind, the plane flew very steadily and placed first with a three flight average 2 minutes. At this time only three-quarter maximum winds was used. Later it was found that the model averaged from 2:30 to 3 minutes with maximum turns in calm air. We warn you, if there are any thermals around, the ship is sure to soar away!

If results with the smaller ship are any indication, a scaled-up ship of Wakefield size should out-perform anything in the field. If you want a super ship for 1941, let's start construction.

Fuselage: At first this type of construction may appear difficult, but with a little practice streamlined fuselages can be made as light as the box type, and without spending very much more time. First, a full-size drawing of the side view must be made. For this purpose dimensions to the center line are given on Plate I. By drawing 1/2 in squares, the rudder is drawn accurately on the side view. After this is done, the keel and rudder outlines, which are cut front medium 1/8 sheet, are glued together and pinned to the drawing. The rudder is flat and can be completed on the drawing. Be sure that the 1/8 square piece on which the stabilizer is mounted is parallel to the center line.

While the outline and rudder are drying, the formers should be cut. All except special formers, are drawn full size on Plate II, giving the outside outline only. These formers are 1/4 wide. The complete outline of the special formers is given on Plate II. Note that the formers are cut from laminated balsa sheet; this not only adds strength to the fuselage, but allows use of lighter wood. Laminating is a simple process: Lay out a balsa sheet on a flat surface and from another balsa sheet, cut short lengths equal to the width of the first sheet. Glue these crossgrain to the first sheet, press in place until dry. Laminated 1/32 sheet is really 1/16 thick.

After all formers are cut glue half of them in place, following the outline the drawing. When dry, lift this completed half from the drawing and glue the remainder in place. The cabin top must be glued in place before formers can be added, because they are glued to this top. When the formers are in place, the 1/8 square side stringers should be glued in the notches. In order that the fuselage be straight, stringers should be of equal weight and strength and glued on at the same time.

Before putting on the 1/16 square stringers the landing gear and rear motor anchor should be completed. The landing gear is secured with plenty of glue, gussets and silk strips. The rear motor anchor is a short length of 3/16 diameter aluminum tubing, which fits through the hole cut in the gussets around former N. Be sure to cut the aluminum fitting shown on Plate II to face the gussets: this adds strength and keeps tubing from pulling out.

Tubing is used for a motor anchor because a piece 1/8 wire may be slipped through it and used for holding the model when winding. With this method no strain is put on the fuselage when stretching the motor out to pack in turns.

Next the 1/16 square stringers and cabin covering are added. The position of the stringers is marked on the formers. Note that notches are not cut for 1/16 stringers. The cabin covering is shown half size on Plate II and will have to be scaled up. The direction of the grain is especially important to facilitate brending. When the fuselage is finished it should be sanded carefully in order to give a smooth covering.

Wing and Stabilizer: The wing has no center spars; strength comes from the 1/32 sheet covering which also prevents excessive sag between ribs. Full size airfoil sections are given on Plate II. This airfoil was developed by modifying the Gottingen 176 which has excellent characteristics at low speeds. Make a template and cut the required number of ribs. Lay out a full size drawing of the wing and stabilizer and construct them in the conventional manner. Taper the trailing edge before gluing in place. After dihedral is put in cover the leading edge with sheet. It is advisable to sand the sheet smooth on a flat surface before applying, otherwise it will sand through at the ribs.

At the center section, the wing is covered both top and bottom with 1/32 sheet. Note that this sheet must be glued between the ribs so it will be flush with the airfoil outline. The center rib is cut flat on bottom so that a piece of 1/16 sheet, which fits the cabin top, may be glued flush with it. When this piece is glued to the center rib there will be an open space between the 1/16 sheet and the 1/32 sheet on the bottom camber. Fill this in with sheet balsa and fillet with balsa dust and dope. The wing is held in place by rubber bands stretched from two hooks anchored to the keel near the leading and trailing edges. Stabilizer construction is so simple that no difficulties should be encountered. After it is covered it is glued firmly to the rudder and braced with 1/32 wire, shown on the front view. Note that the tab, which is soft 1/8 sheet, is hinged with thin sheet aluminum.

Propeller and Spinner: Success with any model depends largely on the propeller, therefore great attention should be given to this. Carve the blank as show on Plate I. The approximate blade shape can be determined by the dotted lines on the blank. The blades are about 1/8 thick half way to the tips and decrease progressively toward the tips. It is important that they are identical in shape, weight and thickness. There is about 1/8 undercamber each. Finish the prop with several coats of wood filler and glider polish with intermittent sanding.

After the prop is finished bend the folding- prop lifting to fit the curve. These fittings are lettered A, B and C on Plate II and correspond to the fittings shown on the prop details on Plate I. When these parts are glued securely in place the blade breaks should be cut. On folding props it is important to have the blades free enough to fold, but tight enough to hold their pitch. Washers should be soldered to the rubber-tensioner spring to keep it in place. The bobbin also should be securely fastened to the prop shaft. When making the hook which fits into former A, glue in the aluminum fittings (A) well so that it will hold thrust adjustments.

The spinner is carved or turned from a block with the grain parallel to the thrust line. Finish the outside first and then cut it in half and hollow out to about 1/8 thickness, Glue the halves together and cut the completed spinner so that it fits tightly over the prop hub. When winding the spinner is removed.

Flying: On the side view the position of the center of grainy is shown: it must be in this position or slightly to the rear in order to obtain the best glide. The original ship was powered with 16 strands of 3/16 brown contest rubber. With this motor the prop run was about 1:15 minutes. On the second model 20 strands of 3/16 brown contest rubber, 32 inches long, was used. The motor run was slightly under the minute mark, but altitude attained was much greater than with the first motor. When lubed and stretched five times its length, 700 turns can be packed into the motor.

Test flights should be made with a gradual increase in turns. The model climbs and glides in right-hand circles. There should be a slight wash-in on the right wing and the tab turned slightly to the right. Be sure to put in the correct amount of right and downthrust. If the model stalls check center of gravity and thrust adjustments. If it dives or glides steeply, increase the wing's angle of incidence and move the center of gravity to the rear. Due to its stable characteristics, you should have no trouble adjusting the model if your surfaces are set as directed.

Notes: The high mounted stabilizer seemed to increase the glide and spiral stability. Retractable landing gear should increase performance, but is not advised unless you have a good take-off and landing spot. If retractable gear is used be sure to fix it so that you can leave it down for test flights: it will save the covering on the bottom of the fuselage.

When you wind to maximum, be prepared to chase cross-country. Its fine flying qualities and appearance will make you proud of your ship." 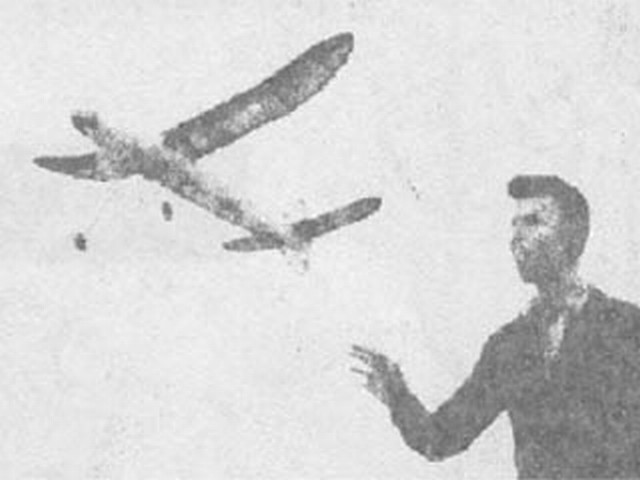