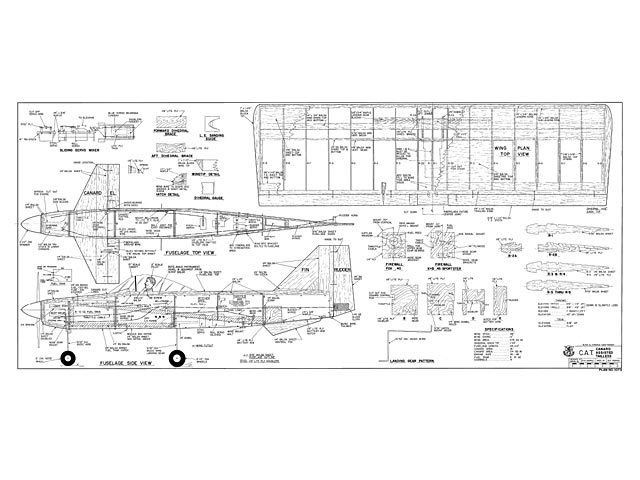 Among the most innovative and popular of these new ARV's was the Canard Assisted Tailless (C.A.T.) design, which combined high speed stability of a tailless aircraft with the efficiency and slow speed stability inherent in a canard configuration. Use of a low aspect ratio wing allowed high speeds on low power, while the additional wing area provided by the canard allowed flight at very low airspeeds. Pitch control, provided by elevons on the wing and by an elevator on the canard, was very responsive at both high and low airspeeds. The low aspect ratio wing and full span elevens also provided quick roll control and overall agility.

The C.A.T. proved to be an excellent all around aircraft. It was fast, efficient, and highly acrobatic - all on relatively low power, and at low cost. CATs were produced and home built in record numbers.

But there was more - and a very good airplane became legend. It turned out that the CAT could carry loads - and that there was a place to carry those loads, The design included a large area under and behind the pilot's seat (right at the Center of Gravity), for luggage. A large hatch on the bottom of the fuselage allowed complete access to this empty area. To some enterprising individuals, the implications of the extra space were obvious; they began constructing modules to fit into the CAT, modifying it for various purposes, A long range module with extra internal fuel tanks was fitted. A 'bomb bay' module allowed parachuting supplies to wilderness camps, medicines to flood victims, or bibles to remote tribes. Camera or infrared mapping modules were available for low cost earth resources work. A crop dusting, mosquito control outfit was popular.

In third world countries, the versatility of the CAT was carried even further - it was a perfect aircraft for counter insurgency (COIN) work, as well as perfect for the insurgents! Modules were developed to carry bombs and rockets. There was room in the wings for machine guns and ammunition. Earth resources modules became reconnaissance modules. All this in a small, simple machine that could land on any road, was easy to maintain, and ran on automotive fuel. Best of all - four CATs could be acquired and equipped for the price of one engine for an OV-10 Bronco COIN aircraft. Thus was born the CAT - and the CAT fighter.

The above is fiction, of course, but need not be. Such an aircraft is possible, perhaps even likely, in the near future. This CAT model is a 1/6 scale rendition of the 'real' CAT - and has all its capabilities, should it ever be built.

The model C.A.T. presented here has some compromises, of course; all aircraft designs involve a series of compromises. Perhaps the most obvious compromise is in the airfoil; the rather blunt, thick leading edge does not allow the very high speeds this bird would otherwise attain. But the plane is still speedy enough for most pilots, and it was felt that predictable slow speed characteristics outweighed any gain in speed that a thinner, more laminar flow wing would produce. Such a wing with slats or droops for low speed work is possible in the future.

The relatively large dihedral angle is another compromise - a flatter wing might be preferable for acrobatics (knife-edge, for instance), with some sacrifice of roll stability. I like my aircraft to be stable enough that they can fly a bit on their own, without constant attention from the pilot. The prototype was built to take advantage of the power and economy of the K&B .45 Sportster engine with radial mount. Despite some problems, that engine is still in use. But just about any .40 size engine will work fine. Installation of a Fox .40 is shown also, but note the Fox tilt-up muffler is required.

Modules to fit this aircraft could be built to accomplish various functions; I leave this up to the builder's imagination and ingenuity, I've built and extensively flown a photo module (a 110 camera, looking sideways) and a bomb dropping module. Air-to-air photos are dependent on the pilot's ability to fly close, steady formation. If you're looking for a challenge, air-to-air photo work is it..." 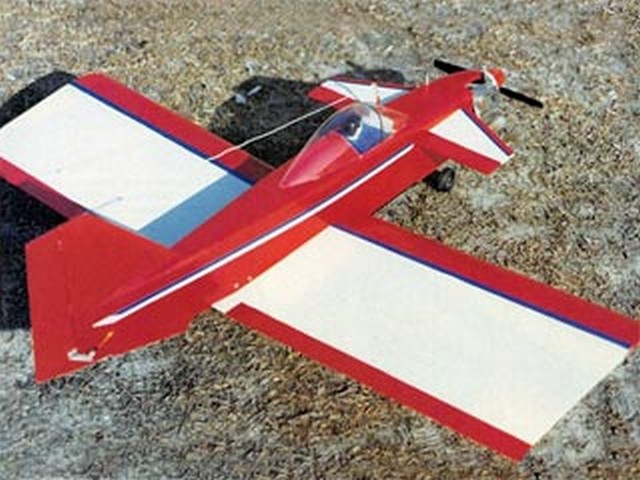