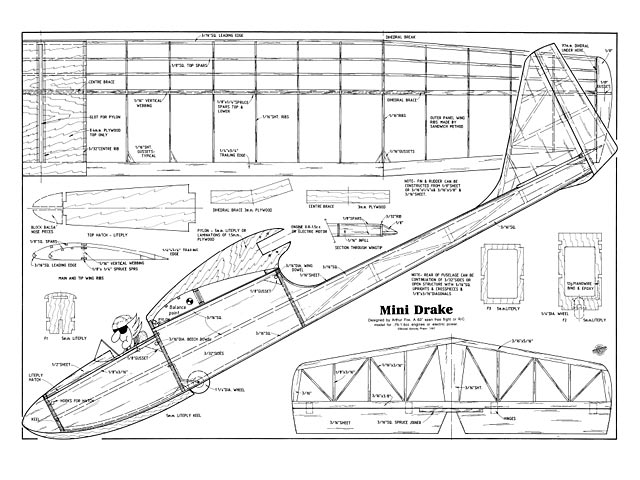 Quote: "Hi Steve; Hope you can use this Mini Drake plan by Arthur Fox. I think Mr Fox is, or was a Brit. He had plans in RCM&E in 88 for a twin boom pusher, called Dragon Fly 2. Model Activity Press was bought up by Key Publishing Ltd of England. I've built four planes from your planes ...you're providing a great service to us balsa builders with your many fine, free plans. Keep up the good work. Bob."

Arthur Fox is never satisfied to build an established, well-known design. His ambition would be to find a unique, really 'different' model that was only known to the designer and, preferably, not even built. However, Arthur is not looking for new designs; he prefers vintage and the bigger the better. His past efforts include monster biplanes, flying boats, canards and some of the most beautiful vintage designs with exquisite structures.

In many senses, Arthur has opted out with the building of the Mini-Drake, as it is not huge, over complex or unique. Of course, he couldn’t quite leave the design as original, it was intended for IC engines but Arthur decided to convert it to electric power. To compensate for the extra weight of the batteries, he changed the rear end to open structure, including the fin, rudder and elevators. You can choose to keep with the all sheet fuselage or go to open structure, also the choice of power is yours. Although we mention the Mini-Drake being suitable for free flight, we are not aware that it has been flown in this configuration. It just seems a natural for this type of flying. Use the open structure rear end and include trim tabs in place of the rudder and elevator.

Italian Ancestry: Mini-Drake was originally the brainchild of a Junior Member of the Aeromodelling Group of Bergamo, in Italy. From a collection of bits and pieces of broken and defunct models, he put together a model that, with the help of the Senior Members of the club, became the Mini Drake and the stock model for beginners to cut their teeth on. That was way back in the early 80s and the Junior Member’s name has not survived the passage of time. Ivan Poloni was largely responsible for the ultimate shape of the model and for part of its development. The beauty of this design is in the fact that it is so simple and remarkably cheap to produce - what more could you want?

Construction:Take a look at the drawings and decide whether you are going for the fully sheeted fuselage and tail or the built up version and get cracking. Construction couldn’t be much more simple, it would be an insult to give a blow-by-blow description, the plan drawing pretty well says it all.

Although the original plan suggests engines up to 1.5 cc, it should be noted that propeller clearance is only suitable for diameters of 6 in without increasing the pylon height. Arthur lightened the pylon on his model by cutting away the centre, something which can be done with a non-vibratory electric motor. Mention is made of 5 mm plywood for the pylon mount and formers, but this is not readily available in the UK. I would suggest two layers of 3 mm Liteply for an IC power pod. A single thickness of Liteply or birch ply should suffice for the formers. The nose/skid crutch can also be cut from two laminations of Liteply.

Spruce is used for the mainspars of the wing and vertical webbing is fitted between the spars and ribs on the centre, flat panel (or at the rear of the spars as shown in the photographs). Ribs are shown butt jointed to the trailing edge on the original drawing, it would be an improvement to either reinforce these joints with a small triangular gusset or to let in the ends of the ribs into the trailing edge. 1/16 sheeting is recommended for the centre section, either side of the pylon, this appears to butt up to the main spar and, possibly, go over the nose spars. It would be simpler and neater to use 1/64 ply to cover this area.

Covering comes down to personal preferences but Airspan would be a good option for this type of model with just one thin coat of dope.

With a light model, a PAW 80 or 100 diesel should be ample to get this model aloft. For electric flight Arthur used a Graupner Speed 400 (6v) motor with five cells of 600mAh capacity. The propeller used was a 5 in diameter Keil Kraft Rubber type. A separate 150mAh battery was included for the receiver and Hitec miniservos used for rudder and elevator control, total weight was 25 oz.

Flying, as you might imagine, is stately rather than storming, it is a model for relaxing and not adrenaline production. Take it out on a fine, calm evening and let the worries of the day drain away. If you want challenges, see how long you can keep the model airborne and how close your landing can be to a given spot." 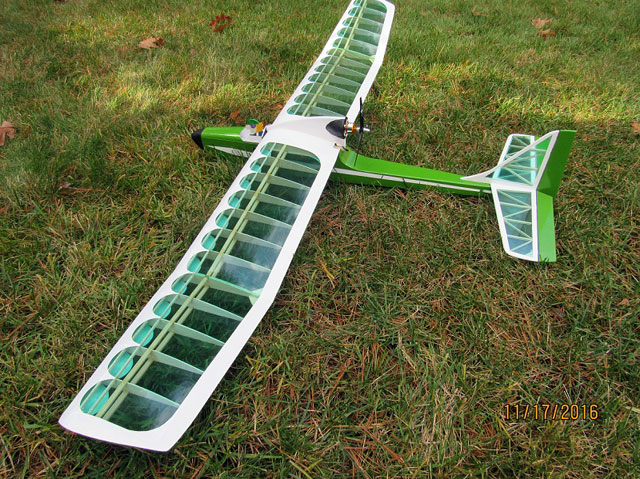