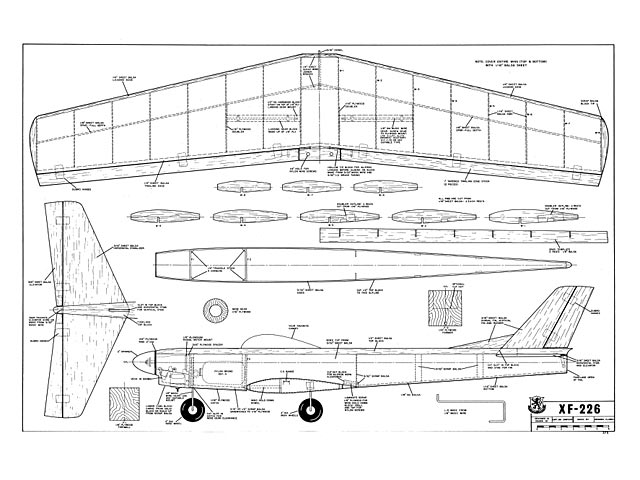 Quote: "Well every year 'ole Dewey sponsors a design contest and every year I drop everything and run like crazy to the drawing board where a month flies by and every year I send the result to him. Don't believe that nonsense about - if you send an envelope Dewey will send your stuff back - He's got so much of my stuff now that it would take a truck to get it all back! So, anyway, here's my entry in the pattern, competition, sport, scale, racing type (type is a deadhead word, Dewey!) design of less than 360 square inches of total wing area employing a Veco 19.

I am real lucky in a lot of respects, so now that I have knocked the stupid editor of this dumb magazine, I'll give credit where credit is due. This plane was really designed around the RCM Classic radio, a prototype of which I acquired in January and which Jack Albrecht, Don Huff, Sid Gates and I collectively built as per Ed Thompson's directions. Needless to say it works flawlessly!

The reason the XF 226 looks sorta like an F-86 is because two years ago I was fortunate enough to be at Max-well AFB, Alabama and, while there, became acquainted with one of the worlds fine gentlemen, a Mr AL Strickland (former AMA VP - now with Orbit West in LA) - anyway - he and his gang (notice, Bud, Herb, Jim and all) flew a modified Taurus (oz612) called a Sweeper (MAN plans) to which this plane bears a close resemblance. I liked the Sweeper quite well and since you all know that nothing is truly original, that is where the basic idea came from!

The first two XF 226's were built from hastily sketched plans by Bill Ledger (who also took all the pictures and taught me to develop and print 'em) and myself. The first one finished has an all balsa wing and is completely covered with new Super MonoKote. Including the four channel Classic radio and a full tank of gas, it's all up flying weight is a scant 3 pounds! That's all! Now, if you still believe that old wives tale about heavy airplanes and wind, go fly this one! I think you'll find it is wing loading and not weight that gives the penetration!

OK, now that you've made up your mind to try it, start by cutting all the tail surfaces out of 3/16 sheet balsa and sand the airfoils as shown. Ted White says that sharp edges make 'em go fast! Through with that? OK, now you are one third done! All that's left is the fuselage and the wing!

Cut the fuselage sides as shown and add scrap braces at the locations shown on the side view. Don't measure, just stick 'em on there - that is how I drew 'em in, you know! Cut the top block to the outline shown as a top view. Notice it is an airfoil shape to enable you to fly knife edge flight through an entire pylon race! Now, slot it for the vertical fin. Mark the two (that's all, just two) former locations on the top block and the fuselage sides. Working rapidly but carefully, glue the formers on the top block, add the fuselage sides, pin the rear cross pieces in place and add the bottom rear planking from the wing, trailing edge to the tail. Stick it all together with tape and, if you prefer, you may add the horizontal and vertical stabilizers and the dorsal fin at this time, provided you round off the aft end of the top block first..." 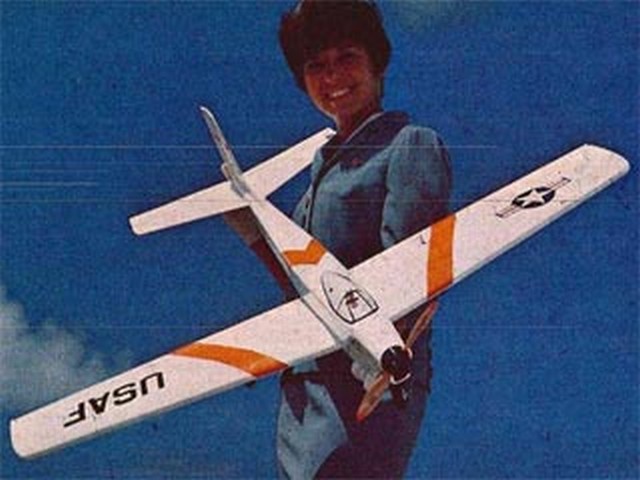