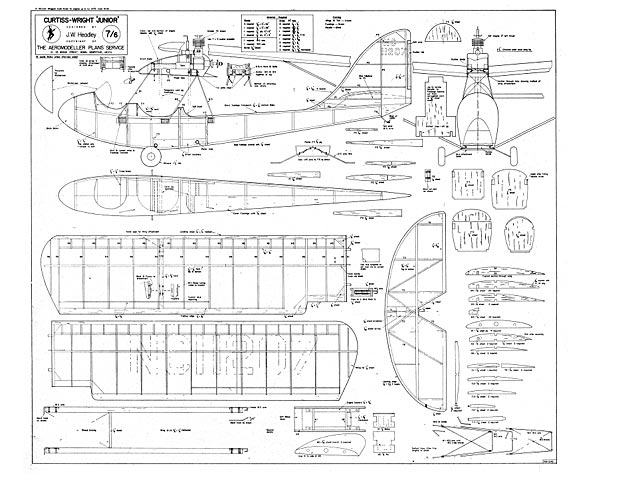 Quote: "THE DESIGNER stumbled upon his first Curtiss-Wright Junior quite by accident. While looking around the hangars at Porterville Airport for a Sopwith Pup replica, he came across a small collection of very well-kept Waco Biplanes. After taking several pictures of these, he saw in the back of the hangar a curious welded tube fuselage with a three cylinder engine mounted on top. A pair of wings were stuck somewhere in the rafters, also a little worse for wear. It wasn't until some time later that it was identified as a C-W Junior, Jack being more interested in the Sopwith Pup at the time.

Although quite a popular ultra-light aircraft in its time, only seventeen examples appear to remain registered today. In 1931, three hundred of these aircraft were made, powered by 45 hp three-cylinder, air-cooled radial engines.

This one-tenth scale model is a beautifully stable flyer - as it should be with such a high wing layout and ample tail surfaces! With the pusher arrangement the builder has two choices over the propulsion unit. Either the engine may be run in the usual way with a pusher propeller, or else the engine may be run in the reverse direction with a normal airscrew. Not all engines will run backwards in this fashion, but sideport engines such as the Mills .75 cc, and reed induction glow engines are equally happy whichever way round they are running.

The model has been designed to follow the full scale construction, except for the tailplane, which has extra diagonal ribs to give the required warp resistance. If you are interested in a true scale model, these diagonals can be omitted, but take care. As we are discussing the tail, let's start with that. Make a corrugated cardboard former for the leading edge, and mould four laminations of 1/8 x 1/32 strips to this contour. Leave this overnight to dry before adding the ribs and spars.

The wings can be made next. Pin down the lower spar, the leading edge and the notched trailing edge. Cut out the required number of ribs and sand to shape. It's easiest to make all the ribs together and then modify the root ribs to the revised shape later. Make the leading edge riblets. Cement all the ribs and riblets to the spars, then add the upper spar, and wing tips, together with all the gussets. Don't put on the plywood root ribs yet, these will be attached later..."

Article pages, thanks to algy2. 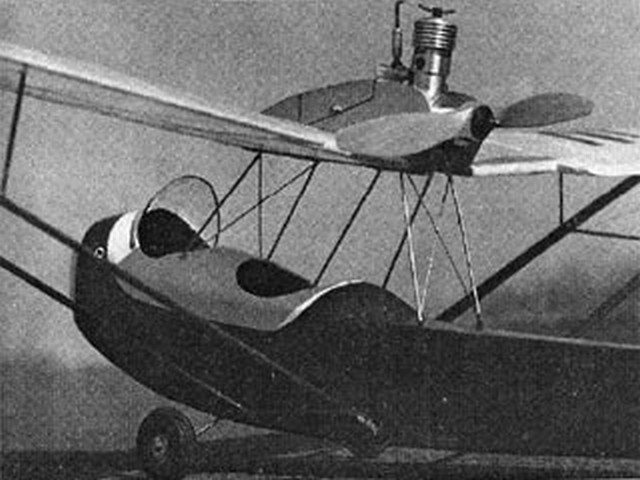