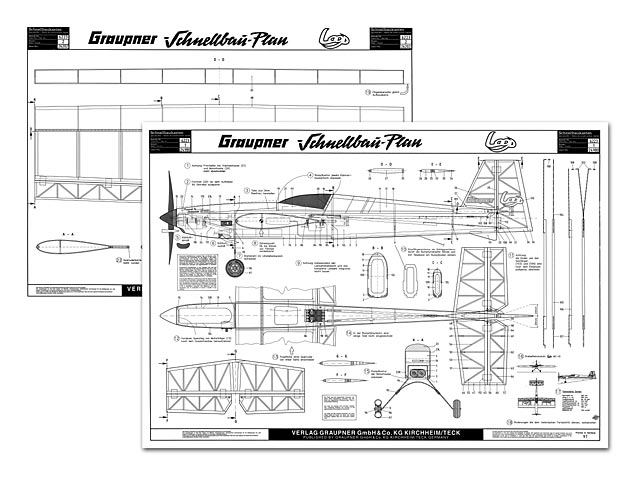 Hi, I'm sending you the GRAUPNER LOOP plan. Your website is great. I built some planes with your plans. Thank you.

There's also an EZone review of the Loop see: https://www.rcgroups.com/forums/showthread.php?397244-The-Hobby-Lobby-Loop

Quote: "Background: In the world of R/C electric aircraft, there are many dozens of examples of planes that claim to be aerobatic / sport aircraft, and some truly are. Because of advances in construction techniques and kit designs, the truly good models often get updated to reflect better performance and easier construction for the builder. However the Graupner Loop distributed by Hobby Lobby is a fresh new design incorporating the great looks of the classic pattern airplane and a combination of new and old construction techniques designed around the inexpensive geared speed 400 motor. Even though the construction of the Loop is very typical of high performance aerobatic airplanes, this is not an ARF and requires moderate building skills.

The designer used a thick cord wing often found in fun fly type airplanes to improve performance at slow speeds. The Loop has features often found in it’s bigger brother such as split elevators, a servo for each aileron, airfoil shaped horizontal and vertical stabilizers, and a long tail moment to allow for smooth maneuvers and flight characteristics.

The wing is very light and extremely strong and gets its strength from spruce spars top and bottom, which are separated by a one piece full span sheer spar which has the dihedral incorporated in it. The fuselage is a simple balsa box with triangle stock in each corner, which allows for the classy rounded look. Blocks are used to create the turtle deck and the long sleek nose, which blends into the molded removable clear canopy. The fuselage has a built in plywood motor mount that has a mounting hole pattern for the recommended Graupner speed 400 FG 1,85 motor/gear drive unit.

The horizontal and vertical stabilizers are a work of art that require very accurate building and shaping skills. The tail feathers required as much time to build and sand as the rest of the airplane.

Kit Contents: Before we opened the box, we took a look at the attractive, full color print, which showed a very nicely done Loop in transparent orange, which I duplicated for my airplane. On the sides of the box were specifications and features of the model in three different languages. Upon opening the box, right on top are the four folded 34 x 24 black line plans, and a detail warning brochure in red. Two of the plan sheets are highly detailed construction drawings, one for the wing and the other for the empennage / fuselage showing part numbers section views. The other two plan sheets are the instructions, one sheet is written in German which also shows construction photos and the second has the written instructions in English and French. (I assume.) The primary language for the plans is German and all dimension and material are specified in metric. I found it a bit cumbersome having to bounce back and fourth between the plans for the English translation, and the construction photos were also illustrated in German, which required some assumptions at times.

Also on top I found a set of very attractive adhesive back Mylar decals which would allow the builder to duplicate the airplane on the box.

The kit contains several die stamped sheets of balsa for the wing ribs, fuselage sides, and formers, and plywood for the motor mount. The parts fell from the sheets very cleanly and with no crunched corners. The wood is of very consistent density and of high quality.

Power System: Hobby Lobby supplied the recommended Graupner Speed 400 FG 1,85 6-volt motor and gear drive unit with a Graupner 9-5 slim prop. The Loop was designed around this gearbox incorporating the mounting holes and clearances required to install it directly into the model without any modifications to the airplane. Hobby Lobby also supplied a Graupner 38-mm spinner that fits the nose perfectly. The gear drive has a four bolt-mounting flange, which is very easy to mount to the flat mounting plate.

I used an AstroFlight Micro-Series BEC speed controller model #215 which is rated up to 30 amps.

Using the supplied power combination along with an 8-cell pack did not perform as expected. The motor drew a calculated 8-9 amps at a pitch speed of about 35 mph. The Loop was under powered and did not perform well at all. I changed the prop to a wood Master Airscrew 9-8 that improved the performance a great deal and increased the flying speed, but still left the flying characteristics below average for a sport aerobatics type airplane. The 9-8 prop also reduced the ground clearance to nothing if the Loop was in a level take or landing roll. With this combination, the Loop was able to maintain a moderate flying speed, but was not able to perform aerobatics such as loops from level flight. My Loop used the miniature servos instead of micro servos, which would help to reduce the weight.

Construction: Let’s talk about the general construction of this beautiful model. The two sheets of plans are complete in themselves and, when combined with the detailed instructions, leave little doubt about the next step. The first task for me was to convert all of the metric dimensions and materials into English decimal / fractional units. You will find yourself bouncing around from sheet to sheet as you go since the plans are written in German and supported in English. This is one reason why this airplane requires moderate building skills; the very detailed plans require some assumptions due to the language conversion.

There were no tricks or surprises in the construction which resulted in some very enjoyable model building. At first glance it might seem like a lot of work to build the stick tail surfaces and ailerons, but the finished product is very attractive. Plus there is a real feeling of satisfaction in having built this model.

Fuselage: Steps 1 through 21 in the 62-step building instructions start with the fuselage. The fuselage utilizes tab and slot construction, making a very light, rigid assembly that naturally seems to go together square with the motor mounting plate built into the nose. Blocks are used to create the turtle deck and the long sleek nose, which blends into the molded removable clear canopy..." 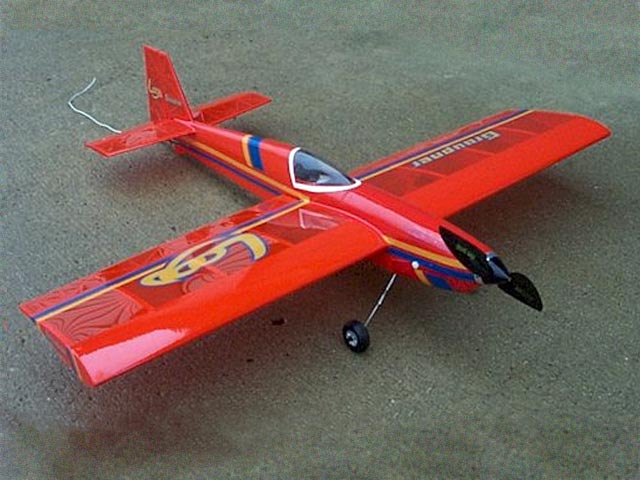