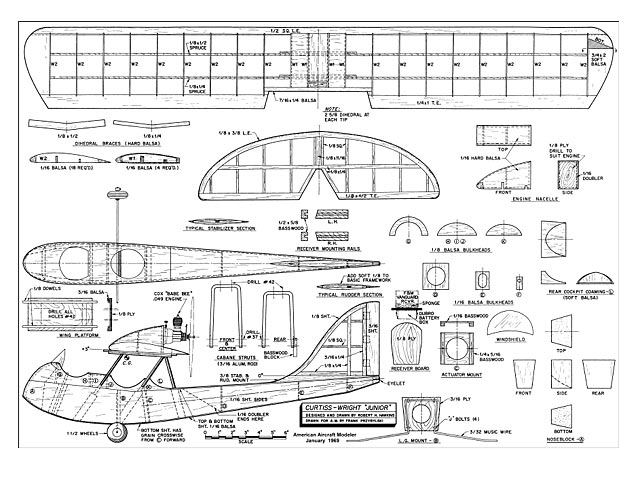 Quote: "Scale model of a great light plane of long ago is ideal subject for 1/2A radio flying on rudder only. Curtiss-Wright Junior, by Robert Hawkins.

IN the late twenties and early thirties, the real romance of flying came from sitting in the breeze of an open-cockpit plane. One of those planes was the Curtiss-Wright Junior, a pusher airplane that was offered in two versions - first as a 40-hp landplane and second as a 60-hp amphibian. The landplane design lends itself well to becoming a sport-flying R/C ship of today. Let's look at the features which make it suitable for R/C flying:

1) Two open cockpits; the front one to house the receiver and batteries and the rear one as the location for the magnetic actuator.
2) A high-wing design with sufficient dihedral to provide good, inherent stability.
3) A pusher-mounted engine which eliminates propeller breakage even in rough fields.
4) An upswept fuselage in the nose area and a landing-gear position that combine to prevent nosing over upon landing.
5) The receiver and battery box are well protected in the front cockpit. There's practically no chance of getting oil or fuel near them with the engine in its high, rear-mounted location.
6) It's different from the usual R/C plane. It looks like a real airplane (at least to those of us old enough to have attended some of the pre-war Nationals meets).

One of the frustrating things that modelers sometimes find with some magazine or kit plans is the 'leave it up to the builder' attitude regarding location and choice of accessories. Most of us would like to know what actuator, battery box, wheels, etc the original builder used. We are listing the manufacturer of items we used in constructing this plane. Of course, many substitutions can be made.

Much of the construction of this plane is straightforward and needs little explanation. Other items require some detailed explanation to make assembly as easy as possible.

Let's start with the wing. The leading edge is made from 1/2 x 1/2 in pre-cut LE stock and notched 3/32 deep by 1/16 wide for each rib, except where noted. Notching can be done quite easily, using an X-acto saw at each edge of the notches and then breaking out the center piece with a single-edge razor blade. Trailing edges are notched in the same manner. The wing spars are x 3/4 and 1/8 x 1/2 Sig spruce. Wing ribs can be cut from medium 1/16 thick balsa, but use R/C balsa for the ribs at the center dihedral joint and at the locations for mounting the engine nacelle.

Build the wing, except for the ribs adja-cent to the engine nacelle, and trim the leading edge, trailing edge and spars for proper dihedral angle. Assemble the dihedral joint, cementing all dihedral braces in place. Now, with the bottom of each wingtip rib raised 2-1/8 above the workbench surface, install the nacelle ribs with the engine nacelle sides in a vertical position. Cement the 1/8 plywood firewall in place after installing four 3-48 blind mounting nuts on the rear surface..." 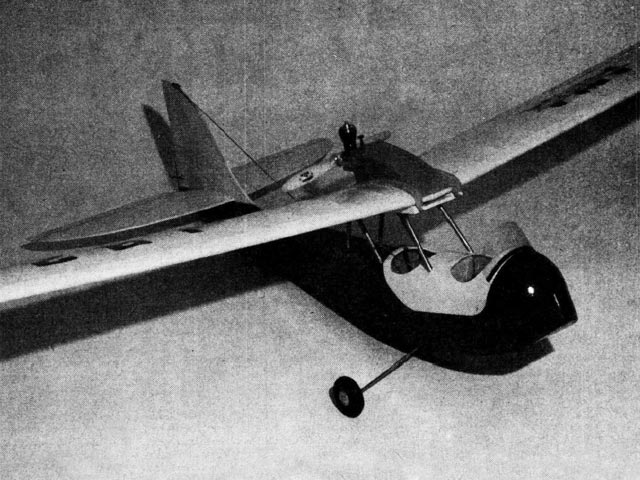