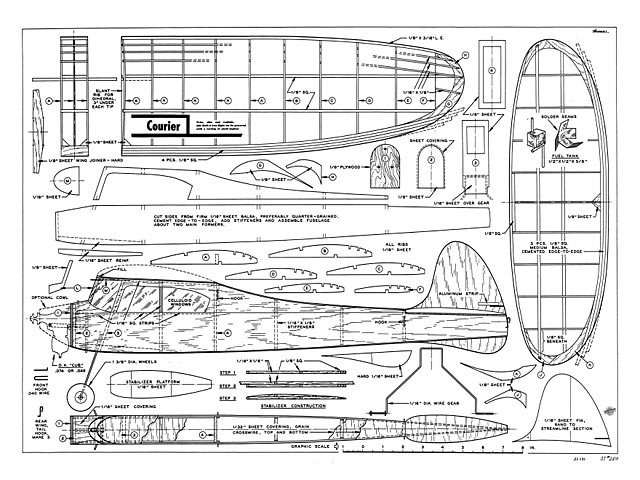 Quote: "Trim, slim and realistic. This Half-A free flight ran be powered with a variety of small engines. Courier, by Christo Russo.

In response to many requests, this month's issue presents two models in plan form for powering with "under .099" engines. One is a control line stunter, Roger Dodger, and the second this ex-tremely clean 35 inch span endurance craft. The advent of the small A's is one of four major developments in model aviation since the early Thirties. In order, these were the introduction of the miniature gasoline engine, the development of control line models, the perfection of the glow plug for 'ignitionless' operation and, now, the tiny g.p. motors under .099 cubic inch displacement. The mini-motors have created an entirely new class of free flight models and have brought back to the activity many old-time competition devotees.

ONE of the temptations in designing a freeflight model for the smaller glo-plug engines is to make the ship extremely small; somehow the tiny engine suggests a tiny plane. Generally it is not such a good idea either, for better all-around flight performance usually comes with a larger model not so much handicapped by 'scale effect' or the dropping-off in efficiency with reduction in size. With nearly 200 square inches of wing area, our model is larger than most Cub .049-powered jobs, but with the hot, new Cub .074 installed, it has power to spare. Simple construction, a neat appearance and good sport flying performance were aims in planning this model.

Sketches indicate the extreme simplicity of the fuselage as-sembly. Select firm wood for parts throughout the model and use cement liberally. Note that the wire landing gear is sandwiched to the inclined fuselage former before actual assembly begins. When basic fuselage frame is complete, add the strips inside the window areas which stiffen the sheet edges. Fit paper patterns first, then cut thin celluloid to fit windshield and window openings, lapping edges slightly. Later dope Silkspan strips over the edges. The entire fuselage is covered with Silkspan, doped directly to the wood. Leave off the bottom sheeting beneath the nose until last; use the opening for access in mounting the fuel tank.

Build the stabilizer over a full-size plan. The trailing edge is formed of several balsa strips, cemented edge-to-edge. These strips are laid down, pinned at intervals and cemented one at a time. Note the rib construction of the stabilizer. The upper spar is added last, along with strips which build the thickness up to one-fourth inch. When dry, these top strips are rounded off to provide a lifting section. Sand all ribs and exposed surfaces to assure a first-rate covering job. Trailing edges are carefully tapered in section by carving and sanding. The stabilizer is covered and doped before the sheet balsa fin is cemented in position.

Wing construction, except for the trailing edge which is similar to that of the stabilizer, is of the straightforward kind. Select hard balsa for spars, leading edges and for the wing joiner. Cement all joints a second time before unpinning the wing halves from the work table. Take care in joining the wing panels to the center-section; each tip should be blocked up three inches for dihedral.

After sanding the completed wing frame, cover it with Silkspan, bottom surfaces first. Because of the compound curvature in the upper surfaces, it is best to cover two rib stations at a time with separate strips of paper. This avoids the wrinkles that otherwise might occur. Spray the wing with water and later apply a single generous coat of dope with a dash of castor oil added. The oil seems to help fill the pores and lends a certain amount of elasticity to the covering which otherwise is easy to tear because of its brittleness. The wing center-section, incidentally, is double-covered.

Wheels we used were solid rubber ones with aluminum hubs. Though a trifle heavy by contest model standards. they are ideal for this model; in fact their weight aids in getting proper balance. The wing hooks, with spurs to assure firm attachment, are thor-oughly cemented in place. Before add-ing color, give the fuselage one coat of clear dope. We chose not to paint the lifting surfaces of the original model, but this is optional with the builder; the small additional weight is no handicap.

Mount the engine upright or inverted as you prefer. Use wood screws and you do not have to worry about anchoring the nuts inside the fuselage. A simple cowl of bent sheet aluminum may be added if desired. One washer beneath the upper mounting lugs will give a shade of downthrust - a good idea for test flying. Fuel-proofer can be brushed over the fuselage and the center of the wing after all coloring and striping are complete.

Balance the model about one-third the chord from the leading edge. Later this point may be moved rearward...." 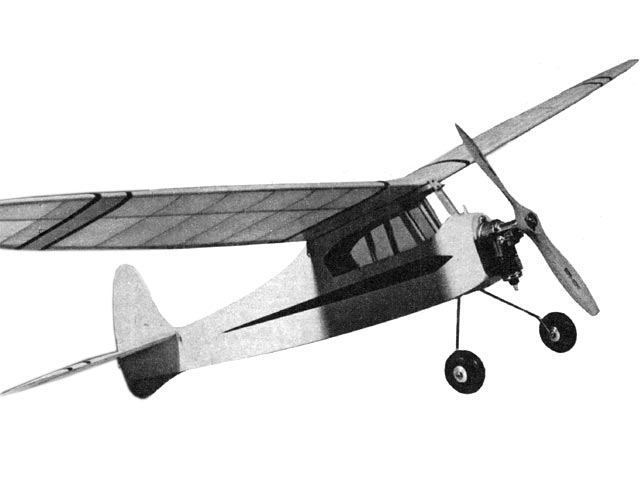