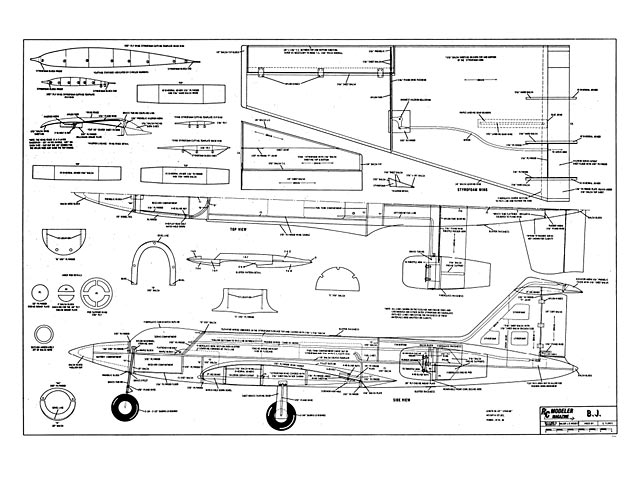 Quote: "When it came to creating his personal 'dream' ship, the author, an F-101 pilot, naturally chose a jet-like aircraft. A composite of the Falcon Jet and Lockheed Jet Star, the BJ is an unusual R/C aircraft in appearance but with thoroughly proven performance. BJ by John D Woods.

In keeping with its space-age design, the construction is of 80% Styrofoam, 10% desk blotter, and 10% balsa! RCM is proud to present this outstanding design effort for twin .19's and proportional.

LET me begin this article the same way that so many others have been started and say this airplane is not recommended for the beginner in R/C. I know that every beginner wants a 9 ft multi-engined, retract gear, swept-wing Thing-a-ma-jig with flaps, working cockpit controls, lights and just a few more things that will come to mind while he is building his DREAM. Well fellows, that's all the foregoing is - a dream, and this model is definitely not for the beginner! I will concede that BJ is my dream ship but you will notice that it is neither a nine footer nor the extremely complicated model described above.

Let me digress here for a few lines and bring you up to date on just how a project of this kind got started in the first place. I started in this sport in 1952 after outgrowing model airplanes as a teenager. I got too old for it in 1945 when I was 17 years old. I again became fascinated by the prospect of building and flying a model airplane after I finished college and went to work in Geophysics for The Standard Oil Company of California in Turlock. A geologist and myself bought and built two Berkley Bootstraps and a Berkley Airtrol Transmitter, Hard Tube Receiver and Escapement. How many of you remember that rig?? Believe it or not, many happy hours were spent flying both of those airplanes swapping equipment back and forth so both of our creations could float gracefully around in the wide blue sky.

From there, Jack Cunningham the geologist, and I progressed through several airplanes and updated our equipment until I left the Seismic Oil Exploration crew and joined the Air Force. I continued in single channel for 10 years before I got the multi bug and upgraded to 10 channel reeds. One and a half years later I graduated to Proportional and to serious design work on my own.

To be perfectly honest my early design work was mostly modifications of other modelers' ideas until I branched out on my own - and with a vengeance. My very first multi design effort was a swept wing, T tailed, 75% styrofoam airplane I elected to call 'Styros'. This airplane went through six separate models Styros; I, II, BT, IV, V, VI. The last of this series, Styros VI won honorable mention in the first RCM Design Contest and although it was never published it was an above average Class III airplane, very fast wide open, yet docile and easy to land with the power back. Incidentally, I am an F-101 pilot so you can see how I got started on the T tailed type model airplane in the first place.

It was at this point that I let my personal dream ship ideas overtake me. I wanted a twin; but, at the same time, I didn't want the hazardous single engine performance associated with conventional twin engine airplanes. I had done considerable experimentation with styrofoam techniques, not only for wing and stab use, but fuselages as well, The blotter-styrofoam method of construction was originated by me in 1965 and a small article on its use was published by RCM in the June 1966 issue. It was developed on another more conventional model I designed called Puffin II (oz9072) Don't be afraid to try it - the method is tried and proven. It is about as light as normal Class III construction and much stronger. The model I envisioned was a twin engine airplane with a modern 'different' look. This ruled out the ordinary scale or scale-like prop driven twins. My research drifted into the jet field but since no practical model jet engines were available I came up with a compromise; a jet-like twin using the Styros developed wing and stab airfoils and the same planform that worked so well on these airplanes. Now the detailed design work on my dream twin began.

The design I settled upon was a composite of the Falcon Jet and Lockheed Jet Star, modified to accept the previously finalized moments, areas, airfoils and shape relationships. The fuselage was the only major unit from Styros that needed extensive modification because of the necessity to allow for the engine placement required of a Twin Jet and to make it resemble a Business Jet as much as possible within the confines of the design considerations already settled upon.

Thus it was that 'BJ' was born. I took a proven airplane, modified it in fuselage shape and engine placement and came up with a very unusual aircraft in appearance but with proven performance. Two problems cropped up because of the location of the engines; balance and fuel draw. The balance problem was solved by locating all of the radio equipment as far forward as possible and by the unusual characteristic of this wing, which allows the CG to be as much as 40% back from the leading edge of the base cord without creating any severe snap roll or tail tuck at the slower speeds..." 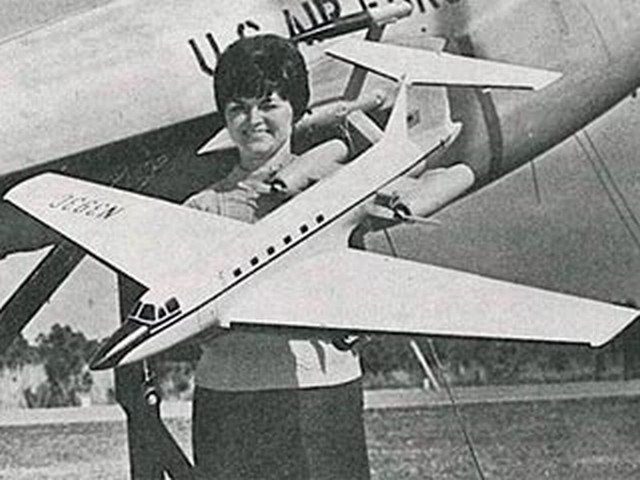