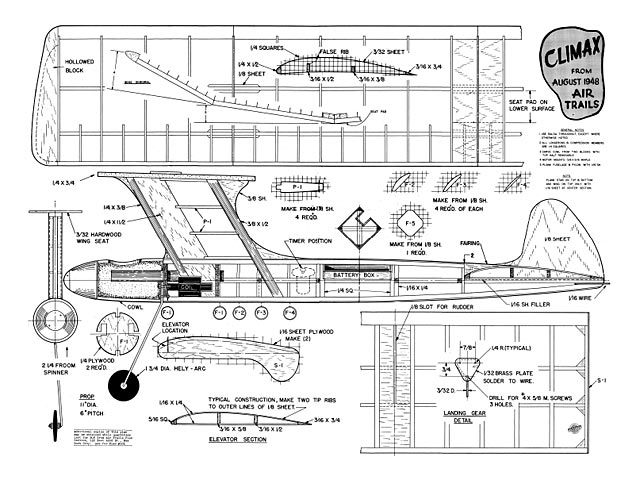 THIS model is a result of several years' experience in building and flying contest-type pylon models. The first of this particular design was flown early in 1946 and because of its outstanding flight characteristics was aptly named 'Climax.'

Easily fitted with floats of the three-float type, the Climax makes a wonderful ROW contender. It holds the present AMA National record in Open Class B ROW. The original model placed in the first three meets entered, including the New York Mirror Meet, even though it weighed 35 ounces. Powered with a Forster .305, a second Climax placed in Class C at the '46 Philly Flying Circus against the field of larger ships. Both ships have placed in many Eastern meets since then.

The Climax operates as well in windy areas as in moderate conditions. Proof of this was shown at the '47 Richmond Va meet, where it was so windy that most Models - rubber, gas, and towline gliders - were going out of sight in four to five minutes.. The Climax made the high flight of the clay with a time of 8:53.

A change in the general run of pylon fuselages was made in the cowling of the engine and in fairing the nose into a 2-1/4 in Froom spinner. This gets away from the usual flat plate area in front, adds to the streamlining, and makes a practically smash-proof fuselage. The spinner also acts as a prop-saver in many landings.

Utilizing a large lifting stab, short tail moment arm, and a medium small rudder the Climax has the best flight pattern possible for contest work. Under power the model will ROG beautifully, heading up and to the right immediately after release, and will continue to spiral upwards until the motor cuts, when it will change to a flat turning glide without loss of altitude. Full info on the uncanny flight arrangement is given later with flight adjustment tips.

Many short cuts in building time are given in the following instructions. Read them carefully before starting construction of your Climax.

From dimensions on the drawings, lay out the fuselage profile on your work bench. This should only take a few minutes as the longerons are symmetrical about the fuselage center-line. Note that the forward pylon upright is longer than the aft upright, providing for 3/16 in positive incidence in wing. All horizontal dimensions are given from rear of spinner..." 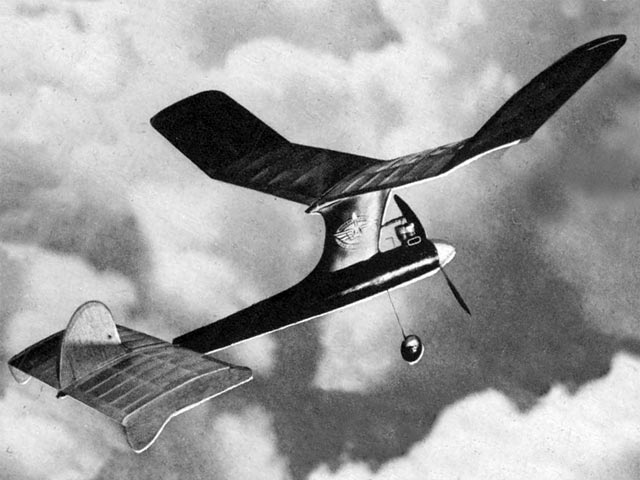